or rather,  I gambled and took a chance...  either way, we now have 2 beautiful chrome fair-leads to suit  16mm ropes... which is good, given that they're on order too *note to self: chase them up*... 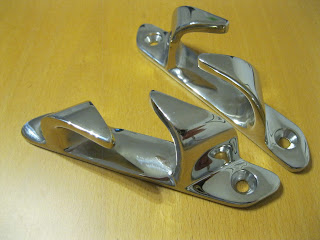 It seems I've gotten away with it too as they have passed the test - the rules of which are never given out of course... any married reader (to either sex) will know what I mean!

We still need another 4 of course (1 either side bow and stern) and given the cost of them, I wasn't prepared to gamble with so much money but for now I shall mark these as "centre line" and put them in the attic with everything else -An attic which is getting rather full!

It just occurred to me that I've never explained WHY we are fitting fair-leads.  It's another of those things we sort of 'learned' (for want of a better description) as we've gone along hiring...  MOST narrowboats don't have them.... their ropes just being attached to a dolly or T-stud, to the bank and back.  The trouble (if you worry about such things) is that the ropes end up scratching the paint where they pass over the side of the boat - introduce a fair-lead, and rather than rubbing on the paintwork, they are held just that little bit off 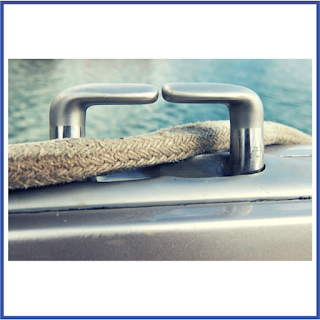 They're also useful for keeping  centre-lines in position either side... so you're not forever twanging things into the canal as you try and change sides with the rope... although that said, we're having twin centre-lines with one dedicated for each side anyway so I suppose that risk will already be reduced.

Fitting them requires a little thought though - initially, I'd planned to use "rivet nuts" rather than tapping threads into the handrails... but on seeking advice, have changed my mind - apparently, once under strain they can work loose.

It's a rather long video but if you've never seen a rivet nut, it might be enlightening

The revised  plan is to use "blind bolts" -


I like the look of these rather than faffing about trying to tap good threads...  tapping and me have a strained (no pun) relationship at the best of times...

It's funny, but until we decided to get a boat, I'd never realised how many different ways there are to achieve the same result OR how many folk there are out there, perfectly happy to give advice and guidance at the drop of a hat.  When you're "young" you rarely take advice...  once you get a bit longer in the tooth, you come to realise, that ALMOST everyone else in the world, probably knows more about stuff than you do... and in my case, I'm perfectly happy to utilise their experience rather than feck things up as I blunder along my own way.

I was chatting with an old boating chap the other day and the subject of "tools" came up - he said he'd made the mistake of trying to keep everything he'd amassed in his garage over the years... the result being a badly organised clutter that drives his wife mad.  He suggested that rather than trying to keep everything, he'd have been better off building a new dedicated tool kit especially for when he got his boat and having a car-boot sale to clear out the old stuff.

With his words still echoing around the empty space between my ears, I've started collecting "stuff" and putting it in the attic along with the other "stuff" .  It's rather handy needing to call into screwfix so often on my way home from work... it gives me a chance to pick up "offers" - take the other day,  I needed a box of 5x50mm screws (well actually I needed 5000 but they only had 800 in stock)  and on offer was a new set of 3 mole grips 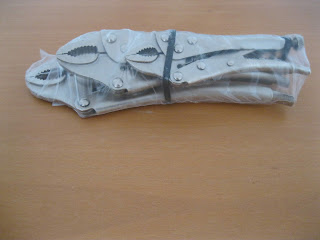 Now ok - I already have a few pairs in my existing tool box, but they're destined for the aforementioned car boot so these are now safely in my boaters tool kit. When I get around to it, I'll do  list of useful things... for the time being, it's an ad-hoc collection of "stuff."- ONLY "stuff" that will come in useful mind!

Boaty types are among (amongst?) the most helpful and patient bunch of folk you'll ever meet - well most of them... there is the odd grumpy one but for the most part, they're a community of like-minded, resourceful  and accepting people and you can pretty much guarantee that whatever WE want to do to the boat, someone else will have done it and worked out a better/easier/stronger way of doing it.  All you need to do is ask - either face to face or via the forums and help will be forthcoming ...  If only the rest of the world was like this.