Patience... you may have spotted is something I'm not very good at.  I'm like a coiled spring at the moment - just waiting to get my hands on the boat.

The amount of times I've said to people "oh - we're not in a rush and we plan to enjoy the process"  - yada, yada.... the reality of course is that we're desperate to begin proper.... the road transport is T'd up just needing a date, the crane is organised with the grp owners poised ready to share it for their autumn crane out and the mooring is sitting there -eagerly awaiting the grey floating mass we'll eventually call home.

The boat yard has been closed for the last 2 weekends as the owner is on holiday - we're hoping that the staff are not.  We're waiting for the call to say the spray-foaming has been done and asking us to come along to mark some cable routes out with them.  Yesterday, despite it being closed, I was desperate to have a drive over and nonchalantly walk along the towpath opposite to try and get a peak at the boat -  Alas, Andy decreed we needed to do some chores around the house.... SO I went up on the roof to secure the boiler cowl, whilst the front fence was being painted down below....Such glamorous lives!

At least the sun was shining though (and the solar panels doing their bit to improve our finances) - which did mean I could do some experiments for free.

I'll explain.   Our new best friend "Amazon prime" (just the trial 1 month - I've been caught out like that before with Experian so once bitten, twice shy and all that) had delivered a "Energenie Power Meter " I'd spotted  in screwfix the other day http://www.screwfix.com/p/energenie-ener007-energy-saving-power-meter-socket/3477H?kpid=3477H&cm_mmc=Google-_-Product%20Listing%20Ads-_-Sales%20Tracking-_-sales%20tracking%20url&gclid=CIS9kPfHrs4CFW4z0wodcigKdw  -  for a quid less...(think tesco's motto here!)

Anyway, here it is 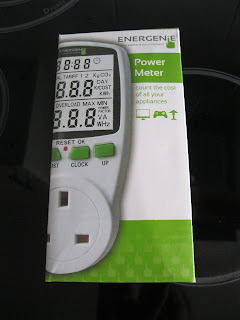 This little thing can be programmed with unit cost (per pwh) so you can work out how much money it costs to say, boil a kettle or do a load of washing.

MORE usefully for us, it also shows the max power taken by a particular device and the kwhs used.  From this, we can work out, how many amps will be taken from the boat's batteries.

SO-after I'd got down off the roof and whilst Andy was painting the front fence, I ran a load of washing through on the most commonly used program (for us) which is a 1 hour, 60 degree wash.  The booklet says it uses .97kwh.  and the washer purports to be rated at 2000watts max power. 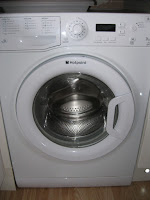 The actual results were thus: 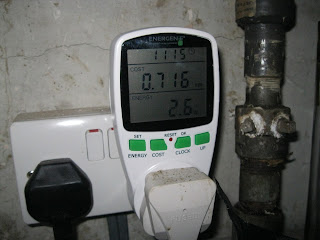 On the boat therefore - running through the inverter (with the engine running of course) that equates to roughly 59.66 amps.   Quite a chunk but given the bank will have a 'usable'  270 (assuming full soc), with the engine running (and the big alternator outputting even half it's rated output, it should be ok.

I cycled through the device and the max power at one point  - presumably whilst the heating the water, was 2082watts.  For the most part, it was taking between 2-500watts 'sloshing around' and on full spin.

Next on my list of experiments was the new (lower power) compact kettle we've bought for the boat.  YES - I know most people use gas to boil the kettle... and I suspect we'll get a collapsible one in the end too... thing is, when we've hired in the past, putting the kettle on whilst on the move - especially if the ship's mate is on the towpath heading off to set a lock, has meant me putting it on and then taking it off when in the lock.  Now ok, if you time it right, you don't waste to much gas but if you don't, you end up with a whole load of steam in the boat and wasted energy at the same time - ergo, automatic electric kettle ! 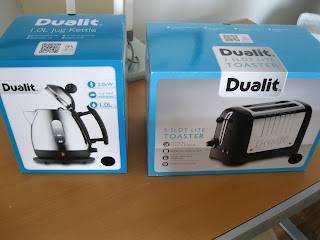 The kettle has a smaller than normal  capacity of just 1 litre and is rated at max 2000watts.

You can see it's a bit smaller than the house one - and in the small boat kitchen - sorry, "Galley" space is limited. 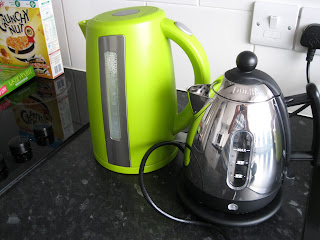 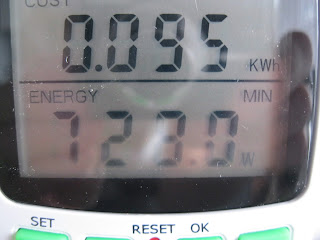 In other news,  we ordered some 16mm (diameter) mooring lines the other day - blooming expensive but Andy insisted on black - I wanted the budget florescent green ones I'd seen on ebay.  APPARENTLY, given the intended "colour scheme" is black, dark grey and light grey, they wouldn't "go"....

I'm putting off buying the fair-leads for a while as we can't agree on which ones we both like.  I hate living in a democracy!

Hi, I'm envious! BTW, you're confusing A and Ahr (I expect you're just using A for shorthand but it is confusing). So the total amount of energy for a wash equates to so many Ahrs, depending on the battery voltage.

When you're converting peak power of 2kW you might use, as a rule of thumb, 10V or allow for the battery sagging under such a huge load and also voltage drop on the wires. So 200A may be nearer the mark.

Also battery capacity is much lower at high currents.

Good luck - I like reading techs build blogs but they get boring when the boat is finished and people just write about water points etc.

Connect the washer to the hot water supply, brings the power usage right down, this is what i have done with mine and can run my machine on a 850watt invertor now.

Also ditch the electric kettle, gas hob all the way!

I'll probably pour a couple of litres of hot water from the calorifier in when the machine's filling... reduce the heating time.. and/or wash at lower temps. I know we'll end up with a gas kettle but would LIKE to try with electric first... I've always hated the wasted gas when it's whistling it's head off and I can't get down into the boat to stop it etc.