THAT'S because, all the "things" we've had on "the list" are gradually being ordered and delivered...

Take yesterday for example...  When I got home from work, I found the Stove sitting waiting for me - OK so it DID block my route into the house but I'm quite agile for a ginger! 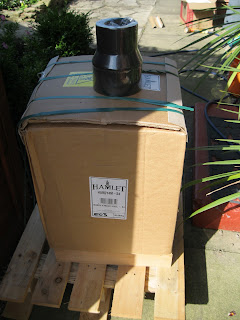 Those of you paying attention - (NOT those that have fallen asleep at the back), may recall the other week we had a change of direction away from Morso, towards the  GBS Mariner 4 from GR8 Fires... totally a financial decision but hopefully one we won't come to regret.

Back in observation mode, you may also have spotted it's actually the HAMLET stove which arrives...  I've checked this with GR8 and it's identical... just branded differntly.   It's acutally being sold on Ebay for  £323 WITHOUT the free increasing collar .

It LOOKS ok, and has everything with it that it should;  the ashpan (and tool), increasing collar (from 4- 5 inch) and heat-proof mitten... along with fitting guidelines etc. 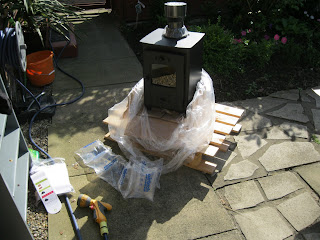 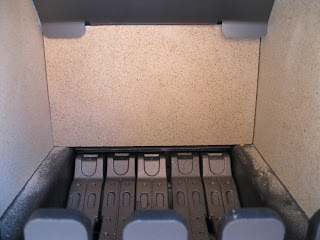 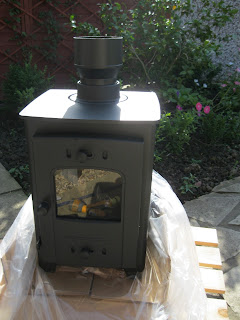 We're quite pleased with the look of it AND it's compactness  - It's also got a riddler in the grate which is an added bonus not mentioned in the sales info (as least I don't remember reading it).

For now it's safely in the garage as we still need to sort out a flue kit...  that will have to wait until after pay day  - even then it's looking tricky this month as we have an appointment with a solicitor next week to sort out our joint wills ... something we've been putting off ... not for any morbid fear - just the cost!

ALSO waiting for me (it must have arrived BEFORE the fire) was the 3Kw Pure-Sine wave inverter and charger I ordered through Amazon from Photonic universe on Sunday...  This is another "substitution" - We'd originally planned to spend more than twice this amount on a Victron  -  Whilst undoubtedly it'd have been a good and efficient piece of kit - £700 difference can go a long way (360 will cover the wills) and the remainder will buy front and rear rope button fenders)... 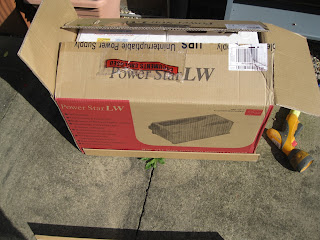 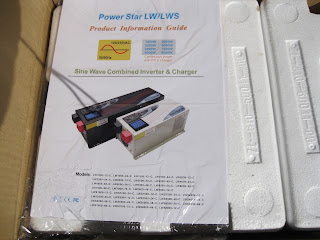 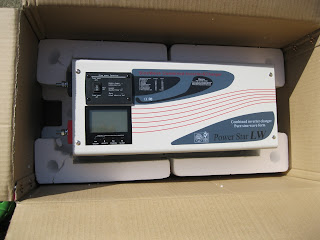 It's had some reasonably favourable reviews over in canal world forums and whilst it's NOT quite as efficient in standby mode (it draws near 1.8ah just being on) we're not adversed to turning it off when we go to bed to save a few ah if it becomes  a problem.    More importantly, it has a surge capacity of 9000watts and should run pretty much any washing machine (with the engine running) we can fit in!

I shall put it to the test at the weekend by rigging it up to power the Hotpoint in the kitchen here at home... I'd have done it last night but didn't have any cable thick enough to connect to the batteries - I'll either use some truck jump-leads from work or make up a couple of 75mm2 cables with lugs  - the kind we use on the fairground stuff.  I'm pretty sure if it will run the current machine, it will be fine on a lower rated Beko or Hoover one we have our eye on for the boat.

I wonder what "Mr Postman" will bring us tomorrow???