Last week, whilst browsing Ebay, I spotted some "used" solar panels up for sale quite locally.  There are still a few left by the looks of things herehttp://www.ebay.co.uk/itm/165W-MONOCRYSTALLINE-BLACK-SOLAR-PANELS-ONLY-59-/131893996459?hash=item1eb57eabab:g:8eoAAOSwUfNXSae7

Rather than buy it now, I sent the chap a message and asked if it'd be ok to come over to take a look and perhaps collect rather than have them delivered.  He was fine with that and offered me black ones rather than the silver one's he'd originally advertised.

So - after work (Andy was helping out that day) we detoured home via Leeds... a bit of a pain as it happened because the road directly where we needed to be was closed off and dug up.  It took a fair old bit of finding but good old "Waze" (other mobile sat navs are available) did good.

It turns out, the chap flogging them has a business designing and installing 'Off Grid' power systems - mainly in sunnier climates.  Smashing chap - you know the sort... someone you just get a good vibe from.  He only sells "Outback" kit but was happy to advise on how to get the best out of the stuff I'd had my eye on.

Anyway - Here we are, back at home with them laid out in the garden for me to test them 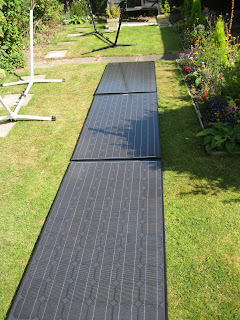 They're 1580mm long  x 808mm wide ... which gives us that valuable extra 20cms 'walking space' and I've emailed the builder so he can put the mushroom vents in the right places.... Hopefully ;-) 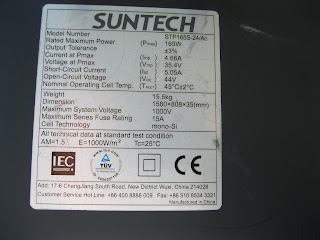 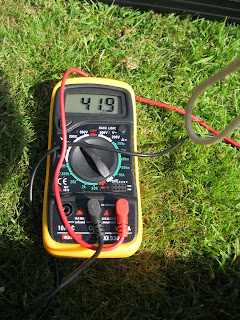 Having checked they were all "working" as much as I could, it struck me that using these panels would mean re-visiting the planned MPPT solar charger...  i.e. we needed one that could accept an incoming voltage of near 150.    I know I could parallel them up and keep the voltage low, but given they are to be sited at the very front of the boat (out of the way when I'm banging around on the roof), wiring them in series will help reduce the voltage drop and mean a smaller current coming through the  roof - leaving the controller to sort it out and do it's stuff.   For a change - rather than scrolling through my enormous 'watch list' on ebay, I thought I'd take a look on Amazon (bearing in mind this was Saturday tea-time) and test out the "Prime" next day delivery again...  I wasn't disappointed btw - both the solar charger and monitor arrived Sunday morning...  Say what you will about their tax situation, they DO deliver when others can't/won't!  MONITOR       MPPT 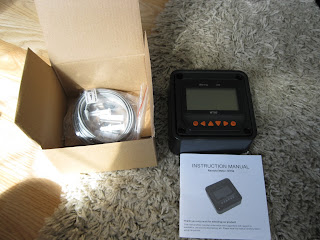 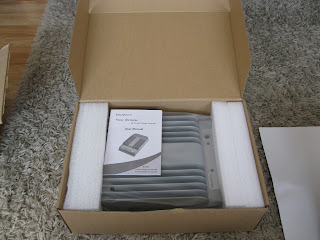 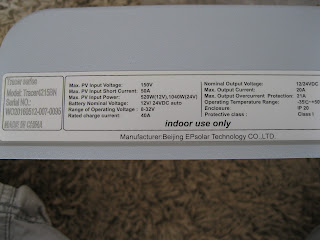 I moved the panels into the sun (this is about 5pm Sunday now) and losely wired them together - NOTE :  If you are buggering around with the mc4 connectors and push them "properly" together... they are a barsteward  pig to get apart again!!! 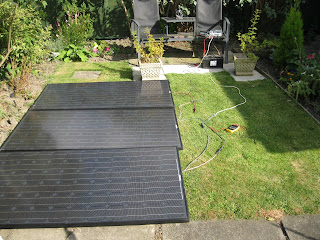 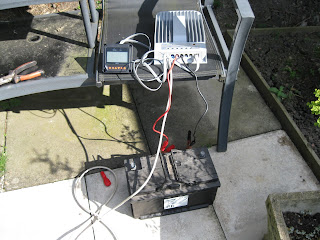 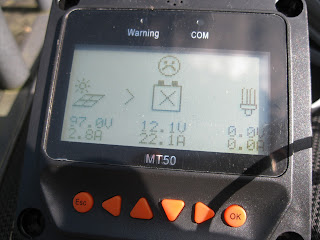 It'd have been good to be able to test it out earlier in the day, but as both my leisure batteries in the garage were fully charged, I'd had to rig up a few headlamp bulbs to drain them - otherwise, the charger would have recognised the voltage and gone into float mode...

You can see from the photo above, it was recording a battery voltage of just 12.1 v .  The left hand side shows the output from the panels as being 97 v with a current of 2.8 amps .  The output from the charger to the battery was managing 22.1 amps - NOT a bad result given a) they are used panels and b) the time of day.

Cost of this project:  180 quid for the panels (as opposed to 420 for 'new ones' from Ecoworthy), 159 for the MPPT (on offer) and 29 for the Monitor (optional but I want to be able to see what's going on - for spotting a fault etc)  Another reason for buying the monitor is that it allows you to personalise the charging and set values you want... as well as being able to select the type of battery bank (and thus charging volatage).  I'm pleased with it and whilst NOT one of the most expensive ones, it does weigh quite a lot given the size of the heat sink - Time will tell but I'm pleased with it value wise...

Total: £368.00  NOT bad for just short of half a kilowatt of solar panels and controller.

The panels are now back in the garage and the other 2 bits in the attic with the rest of the boat stuff ...

btw - On Saturday's visit, Chris intimated he was hoping for a boat handover date of 23rd (ish) October...  we hope it's a little before that but compared to the original time scale, we can't complain.

Mark
I hope I'm wrong but I believe your Tracer MPPT Controller has a maximium DC output on the battery side of 20 amps. Assuming your controller produces 14.4V on the secondary (battery) side then 165 watts x 3 = 495 watts divided by 14.4 volts = 34.37 amps. In maximum conditions your panels will produce almost twice the maximum capacity of the controller.

Hi Tom, I hope you're wrong too as I took that from the specs:

You might want to do some research on the effects of shading, which seems to be worse with series panels. Even a small area in the shade has a huge effect. Blocking diodes help - think Christmas tree lights in series when one goes open circuit. Big subject....

Hi Ralph, I checked with Ian before I bought them and he assured me the panels have blocking diodes in them.

A few years ago I discovered their merits on some "home-made" panels I'd put together from cells I got from ebay... after discovering that over night, the camping battery I'd been charging all day, had been 'feeding' the panels through the night.

If I had my way, I'd have a load of home-made ones hanging vertically down the sides of the boat but I doubt I'll get away with that :-)

The back of the Tracer is slightly confusing stating the max output current is 20A @ 12V. But it also states charging current is 40A. I downloaded and read the manual which clearly states 40A rated charge. The Bulk Charge Voltage is 14.6V and the Float Charge Voltage 13.8V. The Absorption Charge Voltage isn't stated so I assume it's the same as Bulk (14.6V). These figures are for a flooded wet cell lead acid battery.

Many of these solar chargers have a dedicated output which is only live when the panels are generating. I'm guessing it's this which is limited to 20 amps, and the charging output is indeed 40 amps.

Thanks for the post. I went up to see Ian this week and got 2 panels. I told him that you had recommended him on the blog. I had actually seen him previously fitting a system to a boat near our mooring at Altofts

I hope the road was back down for you now... it was a bit of a hike with the panels down the nearest spot I could get parked!

I hope the road was back down for you now... it was a bit of a hike with the panels down the nearest spot I could get parked!

They must have got it fixed. I parked right outside.