Yesterday we took a surprise trip over to see the boat.  When I say surprise, it wasn't a surprise for US, but Andy's nephews who've come to stay for a week.  They thought they were being dragged off to friends of ours for a bbq so I 'think' it was a pleasant surprise to see the boat for the first time instead!

Things have come on nicely since the other week... what with spray-foaming, water-tank fitting, engine and battery installation AND most importantly (well for me) the dents in the roof being fettled -  The roof support bar is still in the way so it looks like I'm going to have to re-visit the stove flu pipe location.  Anyway,  a picture says a thousand words and all that so here we go.

When I spotted the water tank was in, initially I had one of those awful moments, thinking "oh heavens(*substitute more appropriate expletive here) - I forgot to ask them to spray foam behind it" and half coming up with a method in my head of how to get insulation around the tank - not a problem in the end as when I held the camera at floor level under and around the tank you can see they'd done it anyway. 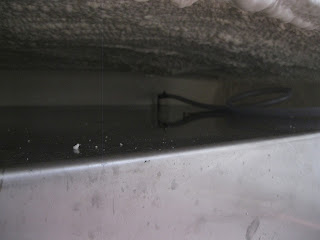 The tank is 200 litres larger than the normal one - although not having ever seen a normal one, I've no frame of reference...  the pump will end up sticking out into the wardrobe as a result but we can cope with that - the filler, will be routed to the starboard gunwhale. 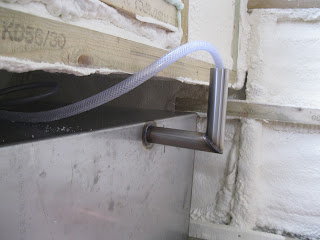 Initially, I'd had concerns about HOW the wooden battens  above the gunhwale were attached - with just 2 self tappers but now I realise, it's the spray foam that holds them FIRMLY in place.  VERY firmly!

At the other end, I couldn't resist lifting the chekerplating (once this fella had moved a side)

and have a nosey in the engine hole.


I know it's just a mass produced blue lump - but to me, it's OUR, mass produced blue lump and it's very exciting lol.  The hospital silencer is fitted (forgot to take a photo of that but imagine it about a foot out of view, left bottom corner), as are the batteries - good to note the starter is Vetus  which was a bit of a surprise - I'd expected some generic non-branded name.  On closer inspection (although you can't see from the photo, the leisures ARE the 135s I'd asked for all those months ago too!

I think there is also enough room to shuffle the starter along a bit and add another 135 should we find we're struggling with the 540ah bank to give us another (usable) 67.5ah...we'll suck it and see first though. 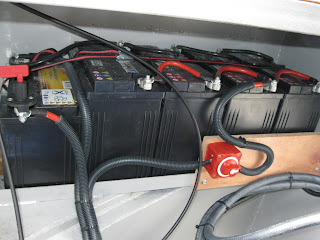 Do you remember that "delux" engine control panel I mentioned many moons ago? 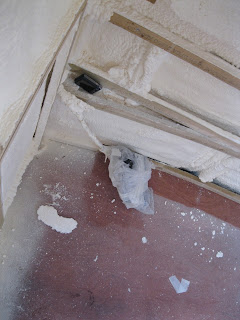 T-dah ... in bubble wrap hanging through the bulkhead.

I could have poked around chatting with Chris all afternoon - sadly though, the natives appeared to be getting restless so we called it a day and headed back home. 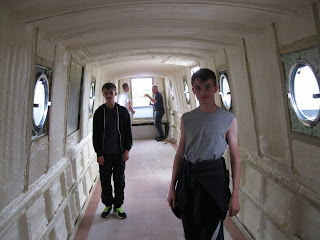 Tomorrow, we're bound for Blackpool for a trip up the Tower, 4 D cinema (whatever that is) and day being hurtled around on horrible rides on the pleasure beach - I'm SURE that (pleasure beach) is a true example of an oxi-moron!

Oh - hang on ...I missed the lighter pocket bit... AS usual, on a visit, it was decided something else was a 'can't do without' item to be added...  MY fault this time as I asked them to fit a gauge to the diesel tank... I didn't even check how much it costs - the kids will just have to eat dust this week or perhaps we could sell one and try to convince the parents they only left one with us?

Until next time... Proper!