I'll explain - on the way home from work on Friday night (it being poets day) I left half an hour early as a bank holiday treat to myself...   Rog and Gav had already taken the day off to extend their holiday weekend, so it'd been a hard day as I had to unload a wagon load of floor-joists and structural timber WITHOUT the use of the forklift!!! ...  I figured half an hour might make up for that - it didn't :-(

SO, I detoured via the boatyard office where our mooring is... my plan being to have a chat with Edd or Jools (at the time I couldn't remember either of their names) to  loosely firm up the plan regarding craning "Ellis"  in when it's ready around 23rd October.

It was the first time I'd met Jools - she's a lovely woman... very laid back, easy to talk to (she had a mug of coffee in my hand within minutes) and full of useful information.  I on the other hand, was a bit 'caffeine d' up and my mouth was going at full speed... NOT a good combination for someone taking gabapentin lol.  Somewhere in my garbled chatter, I explained I'd spoken with her partner a short while ago about arranging to share the cost of a crane in October with the people on their list wanting to take their boats out for the winter.  UNFORTUNATELY for us, someone else has beaten us to the list with a September crane now arranged and therefore "our sharers" have tagged on to that one instead.

I was already in a bit of a sulk as the day before, I'd phoned the builder to confirm we'd be coming over on Saturday morning to check over the boat (and take some more photos) only to be told the yard is closed this weekend AND Next due to holidays...

To be fair it WAS on the website but I was hoping that was aimed at folk just wanting to look around - not those in build...  it seems not.  Which has put a dampener on the next couple of weeks - especially as it's a fortnight since we last went over and will be another 2 weeks until we can again... AND given my input is required to confirm bulkhead positions and wiring might mean that nothing will happen... which irks me to be honest.

THAT said, they do have both printed AND electronic versions of my master drawing (not  the prit-stick one... the other more clever one) so I suppose so long as they can interpret that, it might get moved along.  Time will tell.   It is leaving me feeling rather frustrated though... people have lives and need their time off  so I need to chill....  or rather THAT is what I'm being told!

ON a lighter note,  (though don't think for one moment that I'm not still sulking) MR postman - MR Amazon courier, has called in again with a couple of things  for the boat: 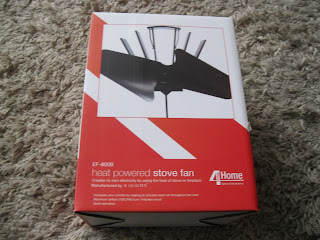 It's not the expensive one - which no doubt we'll probably regret but it will do as a starter... if it seems to make a difference, we'll put the latest, best eco-fan in our letter to Santa.

It does work though -

ALSO in the delivery was a Shower gel,shampoo and Conditioner dispenser...

I know it's hard to get excited about such things, but given the limited space on-board AND the fact I hate having clutter on the shower floor, I thought it'd be a good idea to fix this up. 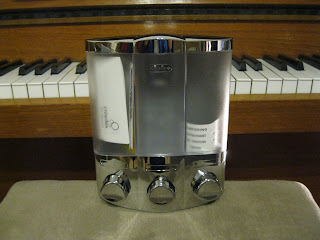 It even comes with sticky labels :-)

I'm still sulking btw but tomorrow, I'm going to do the inverter/washing machine experiment  which will either blow me up or prove whether it'll work... or not!