I'm still sulking btw, however in the spirit of  'moving forward', I've unpacked and tested the inverter as promised.

I have to admit, I'm rather pleased  (and relieved) to report that it does produce clean enough power to run the current home washing machine (Hotpoint) - If you are of a nervous disposition, please look away now as the following "lash it together" photos my horrify you! 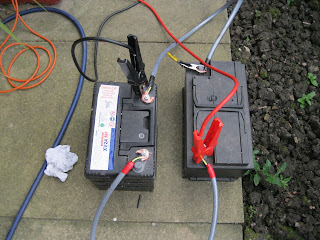 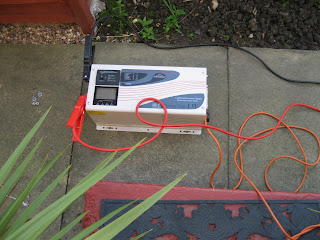 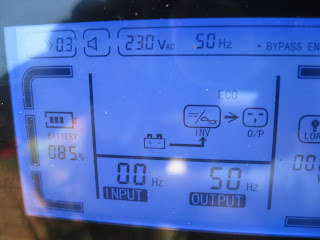 OK - I know the instructions mention using 90mm2 cable for connection and I suspect using the clamps from the jump-leads to hold a cable against the battery terminals is fecking dangerous NOT good practice but it was only for a few minutes to see if it would work.

I didn't bother setting up the thing with battery bank info either - it was purely an experiment... our neighbours must think I'm a nut-job little eccentric but at least we're never stuck for topics of conversation... and you'd be amazed how far down the street  our antics get discussed!

Initially, I'd just connected up 1 battery but the thing screamed at me - not the battery... the inverter... presumably trying to tell me it wasn't able to pull enough power...  with 2 it worked ok.

The postman (and it was him this time not Mr Amazon courier) has called in again and dropped of another of the "vesa" tv mounts  - that's 2 of 3 bought now (yes I know 3 tvs in a 57 foot boat may seem excessive but they double as digital radios too )... 1 each in the lounge, bedroom and dinette (rear) cabin. 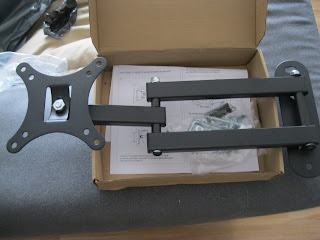 An ebay bargain at 7 quid including postage!

The final "thing" that arrived this time were  "friction-hinges"...  I'd a notion they would be great for attaching the solar panels to the roof - so they could "tilt" 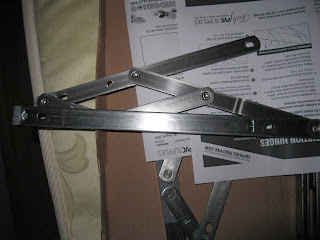 I've played around with them for a bit and whilst I can see potential, they would be limited to only tilting 1 way... ergo,  by morning/afternoon, they'd be counter-productive. We may still use them but I've half a mind just to have the panels flat on the roof anyway.  Another option is to make some simple " L " shaped brackets and use them instead...  more thought required on that one.

Hey how are you liking this inverter now? I'm considering getting one.

From a provision of power point of view, I can't fault it... it's run everything I've asked it to (within the specified parameters) - it even coped briefly (with alarm beeping) when I forgot the tumble dryer was running and put the kettle on. The only down side is the power consumption in normal mode it draws 6 amps per hour just being on... in power save, only 2-3... HOWEVER powersave only kicks in when you draw a reasonable amount of power - say to charge an cordless drill but NOT a phone or toothbrush. OTHERWISE - it's great and for the money - VERY good value.