Now I'm not having a proper moan but things are heating up again at work with the ruddy racing track.   To bring you up to speed, we've been on with the speedway proper, since we delivered and installed the chair-o-planes back in May.  The delivery deadline has long since passed and we're now being (potentially) fined somewhere between 150 and 200 quid each work day the ride is late.

For good reason, the boss wants to know when we think we can have it completed by - this is one of those 'peice of string' questions again I'm afraid.    There are so many unknowns:  known unknowns and unknown, unkowns if you follow that it's extremely difficult to come up with a timescale .  Some of the processes are quantifiable - others less so.

Take the "track" for example; 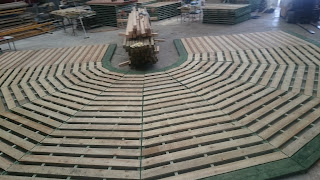 We've been making a complete new one using 3 scraggy old bits of rotten stuff as a template... we only can guess they were the right bits that were pulled from under that hedge back in early December...  There are no blue prints other than a load of old black and white, poor resolution photos from the National Fairground heritage collection.  The track in the photo above wil shortly be covered in in strips of 2mm thick mild steel - which in turn get connected up to + and - from the 110v DC power feed.

The cars will have 2 pick-ups under the floors which drag along the metal - probably sparking a bit here and there to power the cars along.  This is an example of one of the known unknowns... as in HOW to do this safely as none of the historical bits have survived. 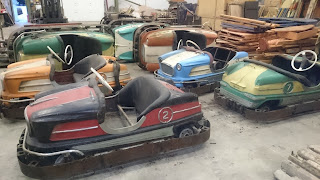 So far I've only put one back together but do have all the bits ready - somewhere ,... for the bodies  at any rate ... we still need to locate 5 dc motors, 3 clutches and a few wheels/tyres.

The track itself, is to be lifted to form a sloping saucer shape - a bit like the proper racing tracks.

To achieve this, I've been making a series of "gates" to support them.   I've had to make this up as I've gone along, using the vertical roof pillar supports  as an indication of the height (think trigonometry).  This is what I've come up with: 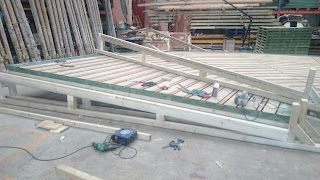 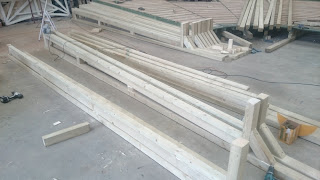 I've 3 more triangular ones to do but should get them done on Monday.

We then need to clear some space (how is anyone's guess) and try to get the underfloor down so we can measure and cut the angles for the cross members which go between the gates.  After that point, the rest of the floor can go down ready for the metal to be fitted...  although we'll still need to work out the best way of getting power to each bit... bus-bars running under each section look the most logical way of doing it.
Once the track is finished, we'll need to begin making the roof structure and supports.  Once again, our friend trigonometry comes into play as we know the height of the perimeter posts and the width of the track.  Some kind of "A" frame structure will need to be made and bolted down "to something"...  it evolves very slowly through a combination of mathematics and trial and error (mostly the latter)

It doesn't help though having passive aggressive dictatorship directorship insisting we work flat out at all the time.  It's September now and I've only managed 1 week off since the end of last year.  I am too old (and tired) to be doing 70+ hour weeks constantly.... this is what is being expected and because I'm salaried, I don't get a penny extra for anything over my "normal" (if that has ever existed) 40 hour week.

Obviously, this is not leaving me much energy or brain space for OUR boat build.. which is getting ever closer now - 6-7 weeks away now hopefully!   Hmmf.

When the boat is ready  I AM going to take a few days off for delivery and to get the fire fitted... this will not be a popular thing so I'm going to have to be firm and stand my ground - it's only fair!