It was an awkward visit to the builder on Saturday... it wasn't a "proper one" - more of a quick nip in (well if you can count a 160 mile round trip a quick nip in)  to drop off the galvanic isolator and take a peek.

We got there a little before 9 and there didn't appear to be anyone around so we wandered our way up to the boat... a little progress had been made but not much for a weeks work. 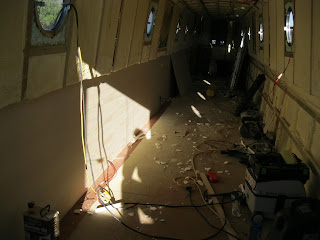 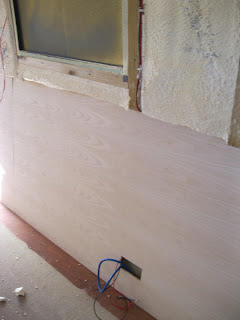 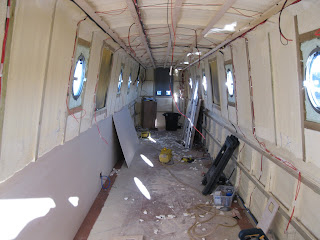 within a few minutes of being inside we heard that awful banging on the roof sound that annoy most boaters...  it was one of the boat yard staff giving me a bollocking  admonishing us for helping ourselves to our boat! - this got my back up a bit but I tried to be friendly none the less.  He then went on to say that Paul (the joiner) had taken ill during the week with a heart problem and is  having some time off to recover.

MY heart sank on hearing those words... whilst I DO hope it's not too serious (he's a nice bloke) I also can't help but wish it'd happened a few weeks down the line... selfish I know.    In the scheme of things a delay to us, whilst irritating, doesn't really matter.

When we got home, I emailed the boss man (he wasn't there) to wish Paul a speedy recovery and got a reply a day or so later to say it's an ongoing condition and he's usually right as reign in no time so we're not to worry.  Fingers crossed on that one.

Sunday was a more constructive day - I got up early and completed  the heating diagram showing final positions and outputs for the various radiators and fin rads.   We then took a trip to Selby Boat Centre to see a bloke called Simon - he's a Webasto dearler/installer etc...  I half expected him to laugh at my "plan" but instead he appeared rather impressed and confirmed it will be ok.  What do you think? 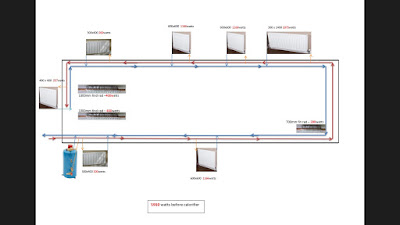 He confirmed my thinking (as a result of lots of research) that the Webasto Thermo top C's respond best  being worked hard.  It was good to hear it's better to keep them firing on full output than let them cycle between half and "off "if you follow...

It was nice chatting with the owner and he agreed to price match the heater we'd originally planned to buy from Kings Lock - SO it's ordered and should be here in a couple of weeks.  It's bonkers to think it'ss costing more than the new combi boiler we bought last year for the house!  Still, I DON'T  do cold very well so it is what it is!

On having a poke around the boat yard, I noticed the slip way and I suspect we'll bring the boat here early next spring to give it a "proper blacking"...  It's our plan to do it with Keelblack http://www.keelblack.co.uk/about/ rather than the usual stuff - it's NOT cheap (there's a surprise) but it's easier to apply than 2 pack or bitumen based products... if the company's claims are to be believed, you can get a coat on in less than 2 hours and have the 2nd coat cured and back in the water after just 36.

ps...  the new window arrived on Monday  - I'm now waiting for a glazing chisel and a nylon hammer... fingers crossed they arrive by Saturday morning!
Posted by Quaysider at 19:46

oh that keelblack does look good and not THAT much more expensive.. i wonder if it will handle icebreaking?!

I suppose we'll find out next winter... then again, unless we HAVE to be somewhere when it freezes, we'll probably sit it out lol.