Sorry in advance if this is a bit all over the place - I'm depressed apparently... well according to my GP at any rate...  she clearly can't tell the difference between someone a bit stressed out, spining loads of plates and trying their best to be patient when dealing with people who won't do what is expected of them.... so much so, she's bunged me on duloxetine - SO FAR it's making me feel awful!

Anyway,  She came to this conclusion when I went to see her on Monday (an appointment that I'd been wiating 3 weeks for) in a bid to replace the gabapentin I'd slowly weaned myself off, for the Pregabalin... (for those not in the know, I've a long term herniated disk which was operated on 4 years ago that is now playing up again along with a few others and problematic facet joints) ... (oh and the ruddy carpal tunnel)...  So we were chatting and I admit I was a bit hyper as my back was particularly bad that morning so I'd taken a bit more oxycodone that normal  She had me fill in a questionnaire  which included a question about suicide (clearly no sense of humour at me filling in NO but I've a list of people I'd like to murder)... SO she then "strongly suggested" I try anti-depressants for a month ...    I've only been taking them for 5 days but so far I feel pretty rotten... they've messed up my sleep patterns (which were already bad) and I feel quite bilious most of the time...  hey ho... she knows best - apparently.

Whilst with the doc, she suggested I chase up the neurosurgeons as I mentioned my appointment still hadn't come through - the waiting time supposedly being 13 weeks (it is was 16 weeks and 1 day when someone finally answered the phone at the LGI)  NOW the waiting time target has officially been increased to 26 weeks ffs.  I'm a bit miffed about this but there's nothing I can do.   It's farcical.   On the plus side, I HAVE got my consultants appoint regarding the carpel tunnel and that is 10th December(a Saturday?) ...  by the time I actually get operated on, I imagine I'll have finished working on the boat so every cloud and all that.

On Wednesday, I got a call from the Crane hire bloke - he'd finally managed to come and do his risk-assessment at Stanley... only to warn that because of the access, whilst it CAN be done, he'll need to use a bigger crane than normal - ergo about an extra 600 quid.  He was keen to explore other locations and we've settled on Selby boat yard ... where the Webasto is coming from.  I asked the owner if he's ok with it and he is... for the same fee Stanley wanted so that's ok too.  It will mean a couple of days chugging to get the boat on to her home mooring but it'll be a good opportunity to see how she handles on the river anyway.   We could of course have lifted her in at the Wakefield Wharf BUT that is right on the weir... so, flow a side, there is always the possibility of the the engine stalling (from being giggled around on a truck for 2 hours) and 7 years worth of savings being washed over the weir and into Chantry bridge...  we'll take the 2 day journey any day!

IF we can get organised enough, I'll pipe up the heating circuit and radiators whilst in Selby and Simon can fit the unit there for us.  We'll have to see - it's complicated further by him being closed for a holiday slap bang when we are supposed to get the boat.  I think in reality, we'll have to push it back 1 week to accommodate this - we'll talk it through with the builder tomorrow when we go to check on progress.

Talking of progress - this week was going to be a week of electrical sockets etc., but work was busy and I only managed to buy some hep2o 22mm piping  - 75 metres worth (we needed  62 but they come in 25m rolls of course). 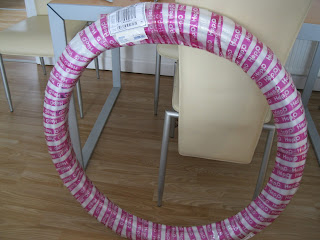 It'd been delivered to Sheila next door and it took all my effort to try and convince her we HAVE'NT got a hoolahoop addiction!

I more cheery news - despite my (apparent) depression, last night Andy produced surprise Theatre tickets and we went off to see Alan Ayckbourn's Bedroom Farce at the Wakefield Theatre

They did a good job of it and we both enjoyed it... just a shame the theatre was half empty (sorry... that's negative.. HALF FULL! )

We stopped short of buying beer though as they were charging £4.30 a pint... it's Wakefield Westgate NOT Drury Lane!

Writing of beer, what with my pills and "stop-tober" just around the corner, we're dry again for a while...  I say a while because we've agreed on a bottle of posh bubbly when we eventually get the boat home.

I'll report back on  what we find in tomorrows visit in due course.

When it's all built and you are on the water cruising - it's the best stress reliever....doctors should prescribe it.

I know you're right Andy... it feels a long way off still but after today's visit, things are moving along ok again...

Very interesting many thanks, I presume your readers
would likely want more reviews along these lines continue the great effort.
Crane hire

I'm impressed by your work on the post. I convinced by you article You've posted. Thanks a bunch!
click here