I'm easily pleased... (contrary to what Andy says) - THIS week, we've had various deliveries but my favourite has to be the collapse bucket: 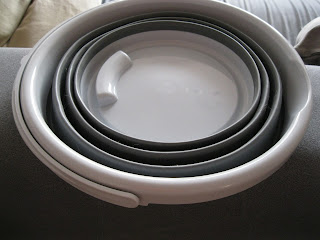 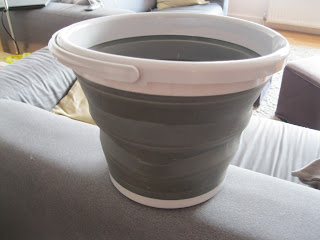 well there's no pleasing some folk...

WHAT about 2x 5 metre solar cable extensions then instead? 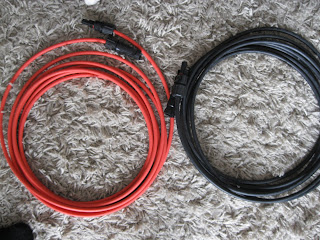 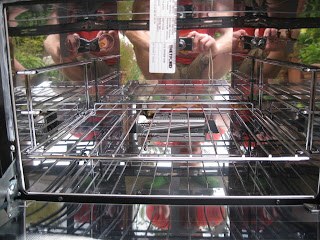 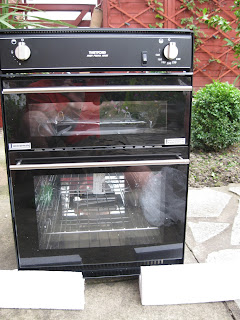 It's an over-priced device in my opinion - usually circa £395 but at the moment being sold by Brit Marine for £355.... well I say Brit Marine - when it arrived, it seems to have come from Midland Chandlers after-all.  No matter.  It's bought now so that's one less thing to fork out for later on.

It's been quite a week  for deliveries really - Eric next door, does enjoy taking things in for us though... it gives him a chance to have a natter most days and we really appreciate having oldies as neighbours.    ONE thing that took a bit of explaining though were these: 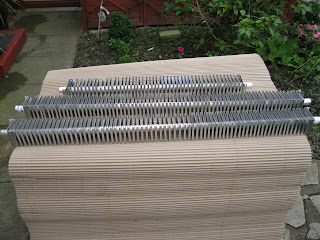 3 fin rads - 2 for the dinette/rear cabin and 1 for the main wardrobe in the bedroom.

Looking at them, I can't work out how best to connect the pipes - I'm "guessing" a push-fit connection might do or failing that some kind of hose and jubilee clip arrangement.

They don't give out a lot of heat (120 watts each) but my idea is to have them under the raised floor of the dinettes on each side with vents/grills to allow for gentle warming of your legs.    Initially, we'd planned on just having the fin rads in there but having re-visited the plan, decided to add a couple of small wall mounted radiators (1 each side) under the gunwale BELOW the seat height (so when they are made up into beds you don't burnn your bum on them!) 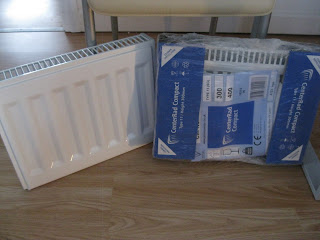 They're only rated at a little over 200 watts each but with the fin rads, that tops up the heat in the cabin there to around 440 watts - NOT a lot but it's only 6 ft long with 2 portholes in so hopefully it'll be enough.  I doubt it'll ever be tropical back there but along with the stove and eco fan blowing heat through from the lounge, it should be comfortable at least.  IF it does turn out to be too cold, we can always add another little radiator behind the back steps to introduce another 200 watts.

On the subject of heating - we've been discussing what our first priority is when the boat arrives...  originally we'd planned on installing the fire.  Having given it considerable thought, we've decided that after the lights and electric sockets, the next thing HAS to be getting the Webasto heating up and running... The main reason being the flooring... given we plan to insulate the floor with kingspan 50mm foil board, doing the fire first would be a faff - it'll be better to leave it until after we've adjusted the trim/ballast once everything is on board.  I'll mean several months of "rough" flooring but at least we won't rush to get the oak down and end up scratching it during the works.

We've really struggled to get a good price on the heating boiler - the best price is from Kings Lock but even that's a little over £1100 -  MORE  than we spent last year for the  new Viessmann for the house...  bonkers.  Still,  if that's the price, that's the price.  We toyed with the idea of buying one of those "recon" units off Ebay but they're still 4-500 quid and there's no guarantee they'll work.    SO on Sunday, we're off up to the dealer in Selby who will price match Kings Lock .   Apparently they take  a few weeks to come so we may as well bite that bullet now.

Before then, tomorrow morning we're nipping back over the Pennines again to see what's happened this week - AND to take the Galvanic Isolator for them to fit.  It's only a couple of wires and would only take a few mins if I did it instead but it gives us an excuse to call in again.

Sorry this posting is all over the place - work is mad again and along side of the boat, I'm trying to flog various stuff on ebay (including a car) and somewhere before we get the boat I've got new windows to fit to the bungalow - well I say windows,  just 1 for now...  I ordered it a few weeks ago and it's arriving on Monday... the thought process being that I can "practice" fitting the back bedroom one first (which no one can see) and if it goes ok, order the rest... if not, then we can live with it until we can afford to pay a "proper man" to fit the others lol

Mark, If you are thinking of fitting something like a Webasto or Eberspacher then I do hope you have the same number of watts in heater panels as the maximum output of the boiler. Example: Boiler output 3000 Watts. Combined heater panel output 2000 Watts. The boiler will heat the water and the panels won't be able to radiate all of it. The boiler will then shut down until the panels have dissipated the heat and then turn back on. (ON - OFF- ON -OFF, etc). The boiler will quickly carbon up and require a rebuild. These small heaters need to be run hard continuously to avoid coking up.

Thanks for the warning Tom - I've gone the other way a bit actually, by the time the other rads are added up, it's a little over the 5.2k the heater outputs...(I figured I can always turn one down/off if some don't get hot enough).

webasto are the better heaters in my opinion,fitted to many cars reliably,replaced dozens of eberspachers in the same application.