As mentioned last week, we went over to see the boat at the weekend...  some progress has been made in the last 4 weeks - not a lot but at least it has moved on - albeit slower than we'd like.

It's difficult not to appear churlish and given there were 3 other boat hand overs taking place on Saturday it's obvious why not much has happened on Ellis.  That said, at the moment I am feeling a bit frustrated at not being able to get my own way.  Andy is much more laid back about than me... I wish I could be more chilled out - I suppose THAT'S the part of the reason we decided to buy a boat to live on long term... in a bid to "chill me out"

I doubt that will happen overnight but I AM confident it WILL happen ... ... ... eventually.

IN the meantime however, until the boat is finished, I'll be plugging away and stressing out about it all.  My frame of mind isn't being helped by me deciding to come off the the gabapentin either - I'd been up to 2400mg a day and it was doing wonders for my pain... alas, it didn't do a lot for my "thinking" ... an example being when pulling up to traffic lights... on GREEN I'd stop... the brain knowing they were traffic lights but NOT completing the thought  process that GREEN means go.

Anyway, I'm nearly off it now - down to just 300mg a day... which I keep trying to ditch but can't quite...  hopefully on the next visit to the GP, we'll switch to the pregablin and see if I have less side effects ...  Gynecomastia being the biggest one I'm keen to see the back off... boobs are all well and good on certain people but not ideal on a middle-aged, ginger bloke!

SO - The wiring is going in: 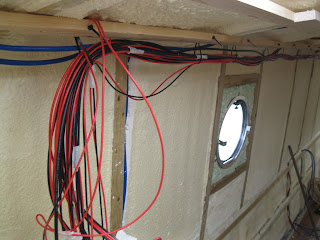 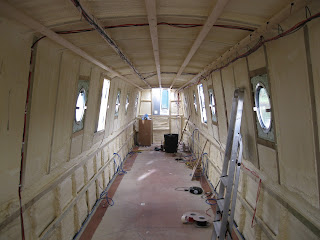 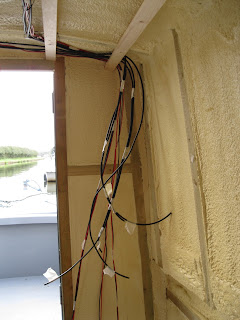 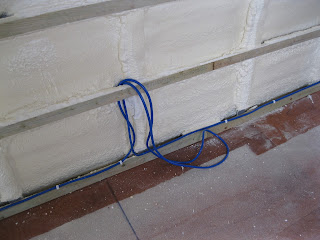 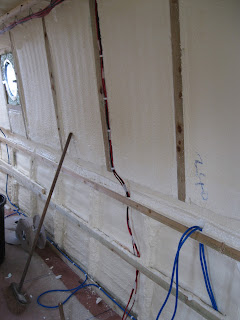 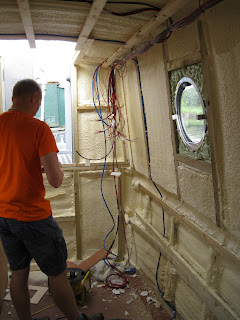 There is also the 75litre calorifier (the original one was 55 litres but we increased it) sitting in a box waiting for it's turn. 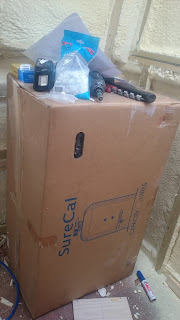 Paul the fitter was eager to go through the "master plan" with us to get a better understanding of our intentions...  he'd spotted a couple of things I'd messed up ... well when I say messed up, they were there, just "under" something else that I'd added later.   He was also keen to flag up the lounge will seem very small at just 8ft 4" if we stick to plan.  To be honest, we'd already had a re-think there and decided to try it out first and potentially ditch a kitchen unit to increase the space by another 2 ft.  We'll see how it feels with the bulkheads in first though.

Whilst looking at the wiring, we did spot a coax cable missing which Paul rectified immediately.  I also took over the conduit with the string through (future proofing in case we want to add anything later on)...

Whilst it "seemed a good idea" it was a pig to get through the 10 meters (times 2) spirally conduit...  when it was through, I taped some para-cord to it and pulled it back through.

NEXT time I do this, I'll attach the cord to a ball of cotton wool, stuff it in one end and attach the Dyson to the other - this works well ... apparently!

Before we left, I carried the inverter on to the boat and asked whether Chris would "discount" the listed price for fitting it - alas he was unable to budge on it which was a bit of a shame - I'd hoped he'd take pity on us ....  he was adamant by the time he'd covered the cost of the 90mm2 cables and the 500amp continuous  rated switch, there isn't much profit in it... at £400 it DOES feel expensive though.  That said, at least it will be his problem if it doesn't work and he'll wire in the galvanic isolator at the same time. Hey ho.

We've been assured that if we go back in 2 weeks, it will have come on leaps and bounds as "it's our turn" now...  I hope so.

I  did get a bit of good news today - I found a crane from a company in Chesterfield and he's quoted "circa" 550+vat  to crane the boat from the trailer at Stanley ... that's a fair bit better than the other quote we had when we planned to  share.  He's going to arrange a site visit (free) and then finalise a figure.

Meanwhile, it's back to the shopping list... next stop, fin rads and radiators...