Bulkheads going in and living in a democracy...

You'll remember that on Saturday morning we planned a visit to see the boat - it'd been 2 weeks since our last one but given Paul had been unwell, we didn't expect much progress.  How wrong we were.
We arrived before the gates to the yard were open but Chris turned up shortly afterwards so off we trotted to the boat.  Paul was already at work and it was good to see him.  He's feeling OK but does have pressures on his time due to his wife undergoing radiotherapy... as such, he mentioned he's working early mornings and late nights to keep things moving along - for which we're appreciative.

He mentioned that he was going to rig some temporary lights up unless we had already bought ours... in which case he'd wire them in for us - ... I was cautious in accepting as in the "extras price list" they charge £10 per light...    Chris joined in the conversation and offered to do them as a freebie as it would make their lives easier...  that's a result then.  That did mean arranging a courier on Monday morning but using www.interparcel.com I selected 24 hour royal mail with £250 insurance cover for a little over £16 which was quite reasonable... I received a confirmation text from them about 4.pm today confirming they're been delivered and signed for by Chris.

Apologies for the photo stream not being in any order - Andy was snapping away whilst I chatted and nosed around.

It was quite a positive visit - at first we were amazed at how big the lounge felt... until we realised the 2nd bathroom bulkhead was not yet in  lol.  It'll be fine... cosy!

Paul mentioned that when fitting the lights, he may as well fit the light switches so I included them in the parcel - they're nothing flashy just polished chrome from screwfix .... we've got the power sockets to match with usb sockets in them too.

As far as we can tell - it's on schedule to be completed by the end of the month.  I've still not had confirmation from the crane bloke or the lorry chap but the last time we spoke, they were prepared to do a Saturday lift /carry.  If things have changed, we may have to move it to a Monday instead.

When we left the yard, we were full of enthusiasm and did a bit of a straggled route home to visit Wendy and Eddie on their sail-away.  They've had it for a little over a year and living on-board since March.  When we arrived, poor Eddie had the engine hole open and was struggling with their Webasto ... the header tank was empty which indicated a leak "somewhere"...  As they had it professionally fitted, they'll be taking it back to the chap who did it to sort.  It didn't stop them filling it up and then switching on to show us how fast it warms up - I must say, it IS impressive.  Much faster than the house system.  I had a good nosey around his pipe work and noted the size of the radiators.  He's used type 22s which do chuck out a lot of heat .   On my plan, I've opted for type 21s which don't output quite as much heat (although we've a lot more of them)  but are a few inches thinner.... horses for courses.

It was nice to catch up with them whilst they're in the country for a change... oh the joys of being retired and spending the kids inheritance.... GOOD for them!

On return home, I sorted out an order for JG Speedfit plumbing connectors and bought the remaining radiators - they're "due" next week but the fittings arrived today. 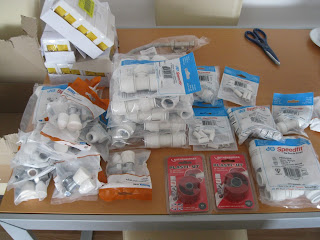 The observant among (amongst?) you will notice the filling loop.  I realise the system is open vented and "usually" filled from the header tank but that will be a pain to do in a confined space - it therefore seems logical to me to fit a non- return valve and filling loop to the main cold supply to speed up the initial filling of the system... I don't think I can overpressure it as the pump is only rated at 2bar anyway... well that's the "thinking" behind it.

What else has been going on? - er well, on Sunday, whilst having another go at tidying the garage (to make space for the new windows which are due to arrive next Thursday) we were discussing our continued 'life laundry' process in preparation for moving on to the boat.  Today when I got in from work I went to get a glass (for water) and found the kitchen cupboards annotated like this: 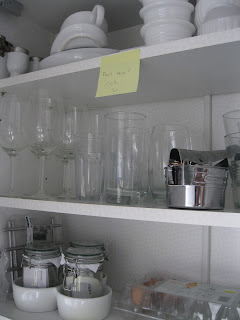 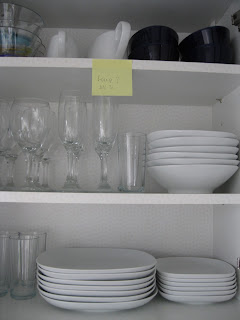 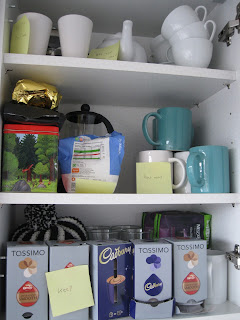 Apparently, we need to identify things we DO and don't need in the boat kitchen...  I mean, it'll not be the least bit annoying for the next 12 months or so, having chucked stuff out early will it?  grrr...  I'm having to stand my ground in regards the number of plates we keep... you may note that apparently we won't be needing a tea-pot :-(   I LIKE having a tea from a tea-pot!!!

Hi. Remember when you are filling your system that at least 25% of the liquid will be antifreeze which you will have to add manually via the header tank first. I would see a problem with connecting it to the cold water supply. As soon as the pump builds any pressure it will push water out of the header tank which will only be sat about 450mm above your Webasto and you will have glycol solution all over. I can't see any benefit for fitting one. It's not like bleeding your boiler at home where you probably have a sealed system where youcan pressurise it and let the air out. There is no quick we to fill these systems. I would also recommend that you fit drain offs on the flow and return pipes at the lowest points.

hmmm - I see your point but couldn't I just clamp a pair of mole grips on the pipe whilst it fills and then "ease" them off slowly? - I'd planned to relocate the loop (once filled) to become the outside tap for boot washing at the rear.

Maybe that would work. Something else that has come up on the forums is that the antifreeze needs mixing with water and then added otherwise stratification and circulation problems can occur. Not sure how much truth there is in it. I drained (absolute pain of a job) and refilled mine a few months ago after fitting new rad valves and it wasn't too bad a job. I started by opening all the bleed vents and put about 3/4 of the fluid back. I them did one rad at a time down one side and then the other. My pipework splits as it goes through the bulkhead and feeds each side separately. I fitted valves to each side of the boat so I can isolate a section and leave the other on if required. Saves messing about if you have to drain it down as you only need to drain and fill part of the system. Looking at your design I would not loop right round the boat. There are a few reasons why. The first is the really long run to to the furthest radiator. The second reason is the amount and size of boxing in you will need. Down one side I suspect you will have 2 x heating pipes, cold feed from the tank to the calorifier and cold outlets and hot coming back. Clipped to the wall this will probably be 150mm plus high. In my saloon there is no pipework at all on one side so furniture can be pushed right back. The largest boxing I have is about 90mm high and 75 wide. I can see where the guy who fitted my boat out originally went wrong and these are the bits I am currently improving. I know you are planning on using 22mm pipe but I would look to split the system into two sides and reduce this as you get further from the webasto to 15mm. Just my thoughts. We originally had two feeds from the tank via two pumps to hot and cold systems. Another design faux pas. In principle great, loads of water etc. In practice using the shower was a nightmare. The pumps ran independently, the pressures were all over based on the fact the shower will never draw even amounts of hot and cold. One pump now removed, flow slightly reduced but much better system (and a spare pump).