The honey moon is over it seems... well not really but thanks to the clocks going back, yesterday afternoon, we had first reason to put the lights on to continue working...  at which point we discovered one of the circuits - the one that includes the kitchen, bathroom and front bedroom wont stay on for more than 10-15 seconds before tripping off.

I  began trouble-shooting by first turning each light switch off and resetting the mcb to see if I could isolate where the fault was.  When that didn't work, I physically removed each light "in case" one of the self switching lights was faulty... no joy there either.  Finally, I removed the mcb and swapped it with the one from the next circuit (which works fine) on the off chance it was a faulty mcb.  No - that (the swapped over one) tripped just the same once connected to the aforementioned circuit.

This can really only mean one thing - " somewhere" between the front and the back of the boat, a nail/screw has gone through a wire...  this is a pain as we've already applied 2 coats of varnish (1 Saturday and 1 yesterday morning) to the entire boat.  As far as I can see, the roof lining will have to come out - possibly even bulkheads for "them"  to try and find the problem .  I've emailed the builder last night and when it gets light out, will give them a call to ask them to send someone to take a look - they'll be narked of course... who wouldn't be but it IS new and WE'VE not yet put a screw/nail or hole in her so it's NOT our problem.   I won't be arsy of course - these things happen and I'm sure it can be sorted out... I just hope (given the dark nights) sooner rather than later.

The Morrells varnish/lacquer by the way was very easy to apply and barely darkens the ash. 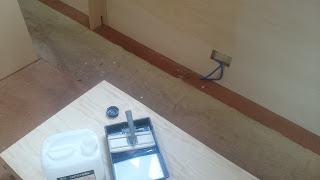 Whilst the varnish was drying, we took her out for a little chug and to fill up the tank...  worryingly, it didn't take very long at all to fill - and I thought it was empty... perhaps the pump was just priming a long while the other day when I was playing with the cassette toilet rinser...  time will tell. 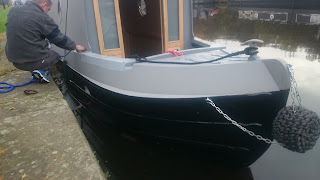 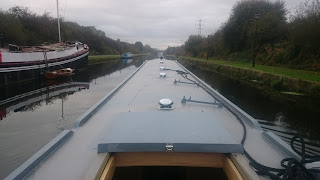 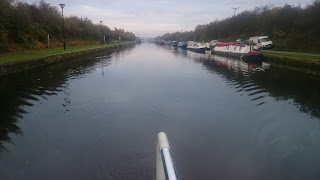 She does handle quite well - any problems will be US not the boat lol  The higher seats on the rear locker give a good view so that has turned out a good decision. I do need to either replace the checker-plate engine compartment cover with buffalo board OR silence the rattle with a cut hose-pipe seal as unless you stand in the middle of it, the noise it makes gets on your nerves.

BACK to yesterday afternoon - before we discovered the fault with the lighting circuit, I fitted one of the mains  and 12 sockets in the lounge  that will be between the chairs. 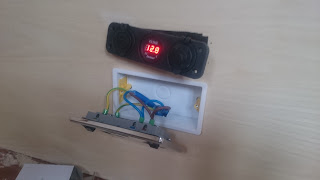 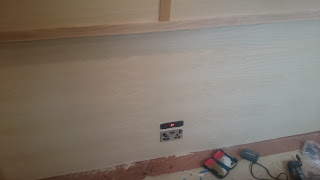 I've used the ferrules cause I know you are supposed to but I CAN'T see any benefit from doing it - I mean, the are just squeezed over the twisted multi-strand wire and then held by the screw clamp in the socket anyway... I really can't see any extra safety from  them but it's not an argument I'm going to have so have just done it "right".  The usb points, 12 socket and volt meter will come in handy to keep an eye on the batteries whilst watching TV of an evening to save walking to the meter cupboard at the back.  I did slip with my multi-tool and scratch the wall a bit but I think it will sand out ok...  *note to self- SLOW DOWN*

THAT said, we've had so many cups of tea and conversations with boaters/dog-walkers and random folk over the last few days, we're probably already at half speed lol.

THIS morning, the plan is to get another coat of varnish on throughout (well ignoring the roof lining in case it does get ripped out) and then have a chug down to fairies hill where we'll turn and then come back.  The plan is to use a quiet water point and hose down 1 side of the boat going down and then then other coming back - it's pretty filthy and whilst we know we won't get it painted before winter sets in, we might get another coat of primer on... possibly an undercoat for her to over-winter in.

In theory the terminal screw will twist and rub on the ferrule and not the strands of the flex which are inside and protected by the ferrule. That way it wont break and strands.

ah right... Well I've done it the proper way at least I suppose but boy the box of them was quite expensive AND it contains lots of tiny ones I can't think of a use for yet but being a Yorkshire man... I WILL do ;-)