Our sort of people...

It's been a busy week - mainly with work but also deliveries of things I ordered at "insomnia clock" on Sunday morning... I like that phrase. It's one of those that does exacctly what is says on the tin affairs.

Since starting the Duloxetine *other pointless anti-depressants are available* I've barely slept more than a few hours a day....  she warned me they make you sleepy (they do) and I can fall asleep within an hour of taking it... what I can't do however, is STAY asleep.  Instead, 3-maybe 4 hours (if I'm lucky) later I'm wide awake.  Saturday night/Sunday morning was the worst so far - I gave in trying around 2.30am and got up to make lists and do "stuff" (quietly).

I was browsing on https://www.limekilnchandlers.co.uk website and came across various things on our list so I ordered them, paying by paypal.  I put a note on asking if they might be able to do anything about the postage price (which their system had put at £40)...  - the website suggests calling before ordering to see if they can do it cheaper but at "insomnia clock" on Sunday morning, I doubted anyone would answer. 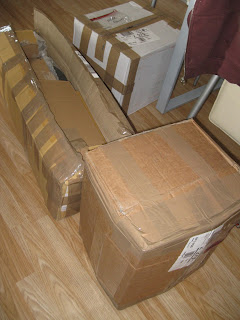 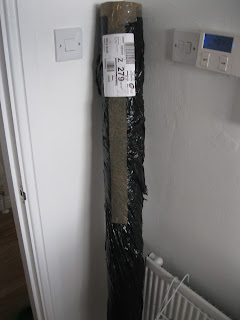 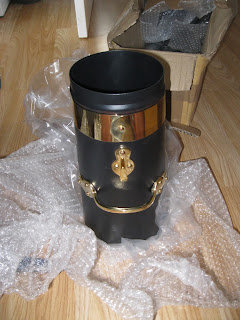 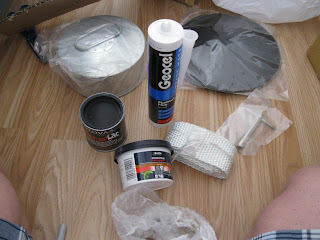 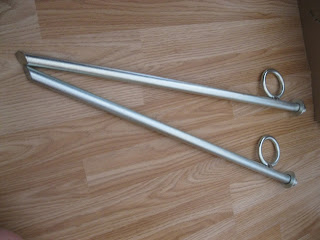 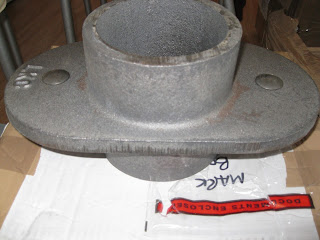 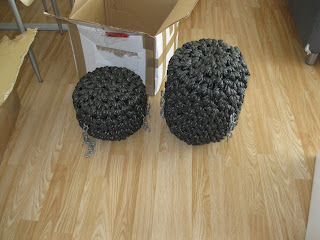 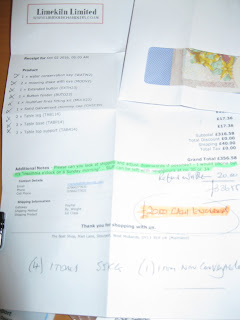 Imagine my pleasure when opening the parcel to find a copy of the order/my note highlighted along with an envelope with £20 in it!

THEY are our kind of people.  Whoever it was that did it, didn't HAVE to...especially in today's money grabbing society.  GOOD old boaters!

To continue "karma's journey" I  spent the money on a  bunch of flowers to send for Paul's the joiner's wife (she's having radiotherapy at the moment) as a 'thank you' for the out of hours efforts, Paul is putting in to finish the boat.

Writing of "money" - (I seem to do a lot of that),  I received an email from the builder yesterday with the final invoice ... it's a lot of money... an awful lot  and as the bank won't le me do on-line transfers for more than £10k at at time, I'll have to either go in to a branch to get them to do it OR space them out over the last week or so.

We DID have a lovely surprise on Wednesday though - a dear friend came to visit and left us a  cheque for £500 to pay for one of the glazed side hatches as a boat warming present.  It's a lot of money and whilst accepting it didn't feel right, the sentiment behind it was quite genuine and  humbling without  being belittling if you follow . Andy especially will appreciate the extra light it will let into the otherwise all porthole saloon - some of you may remember, I was against spending such a large sum on what is really just an overpriced 2ft square of glass... The "gift" guilt-ed me into paying for the other side to be done too though so Thank you Richard...  we REALLY do appreciate it.

STILL on the money front, I've had various conversations this week with the crane company - he's been up to Selby to do his risk assessment...   it's changed since he was last there so he'll need a bigger crane (again) and this has put the price up (again)... and if we want a "slinger" (this is a bloke in a hi-vis jacket who holds the rope) it'd cost ANOTHER £250.  Suffice to say, I will cling on to a rope for dear life instead!!!

ALL that said (well written) I called into the boat yard at Stanley Ferry on the way home from work tonight to see if they had any better ideas.  As it happens, they now have a planned "shared" lift coming up ... probably/possible/hopefully, the last week in October... i.e. a few days earlier than our revised plans.  IF the builder is able to get Ellis ready by then, we'll be able to save quite a lot of money.... I'm not holding my breath.

Tomorrow, we'll nip over again and see how things have moved along this week - I know they're sick of us turning up, but  if they communicated better *read replied to emails faster* I wouldn't feel quite so vulnerable.

It's all fine... we're nearly there and then the work can begin!