On Saturday we went over to see the boat and check on progress.  The final bulkheads are now in position and a few lights/switches in.  Paul was working away when we arrived and thanked us for the flowers I sent to his wife - She's having a rotten time with the radiotherapy and they had the desired effect so that was good.

There still looks to be lots to be done and we've hit a bit of  a snag with 1 of the glazed side hatches.  WHEN we drew the original plans, we hadn't taken into account the door to the bathroom from the lounge - ergo, half of the glazed panel cannot fold back on hinges on account of the door frame getting in the way.  The options to get around this were either having a solid 2ft "lift out panel" or a half lift out and half hinged one.  We've gone for the latter - ok so it'll be  a bit more of a faff but at least that way when if I break it on the floor, it'll only be half a broken window lol.

We also spotted a 230vac socket missing in the kitchen area ... half my fault, half theirs - it was on the plan but I HAD missed out the one under the gunwale for the washer so Paul moved it down there and neither of us spotted it missing - given the lining is now up and wires cut, we'll manage without OR at some point I may fit a pop up one into the work-top. 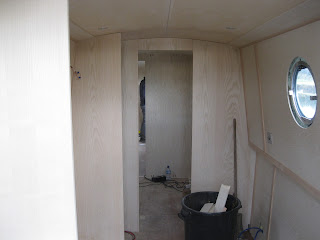 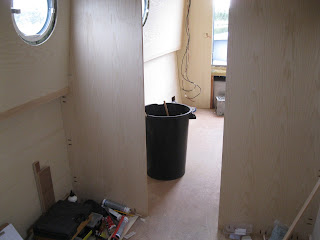 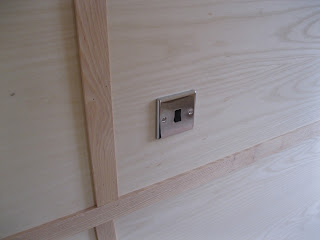 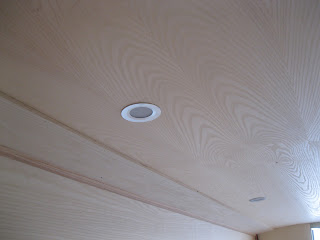 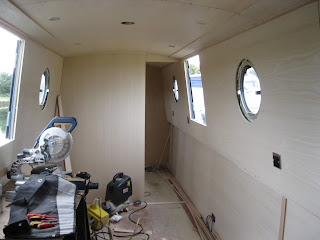 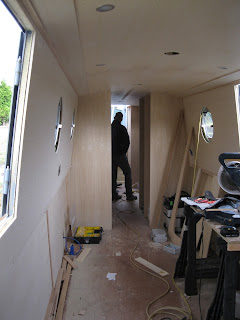 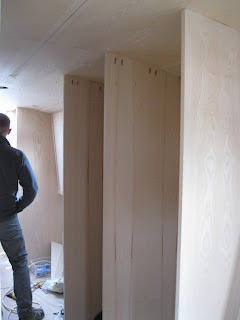 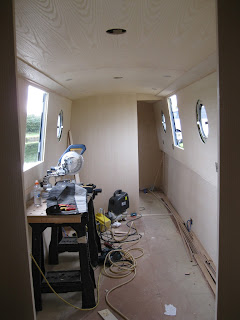 I discussed with Paul our crane dichotomy and he said he's confident he'll be able to have it ready for the 27th.  When Chris arrived, he was reluctant to agree yet.  When we came to leave, I had a chat with the 2nd in charge and explained the financial implications of us having to have our own contract crane and he said he'll give Paul a lift to ensure it's done on time.

With this conversation ringing in my head, this morning I booked the road transport - to be finalised when I speak with Ed from Stanley Marina tomorrow to confirm HE's been able to book his shared crane for the Thursday - it doesn't leave him much time as he's on holiday the day after but someone somewhere HAS to give.  I've resigned myself to the fact the boat might not be totally finished when we take her but with so much money on the table, if that's the case - then so be it.

I've now got the certificate of conformity from Chris so I can contact CRT to get it listed and sort out the licensing.  I'd planned to do that today when I got in from work but have just realised it's out of office hours now so WILL do it tomorrow.  It's not right of course but should "do" to get a number from them to make the insurance easier to sort out... we can correct the details in due course I'm sure.

Yesterday, we took a walk up to our mooring to see if our neighbours had moved up yet and although they haven't. we were able to introduce ourself to the woman the other side of us - She's called Claire and has a baby on the way... that might prove restrictive when I want to make sanding/sawing noises but I suppose I can always untie and float down towards the flood lock for the noisy bits.

Coming on lovely Mark not long now hope they manage to complete their contracted works for you in time. 16 days now!
Enjoying your posts.
Ade

Cheers Ade, I'm hoping once its on the water in "our" hands, I'll de-stress a bit and go back to enjoying the process - after all, there IS no REAL rush...