The hull has arrived...

It's been a busy week - after the funeral, I had to scoot up to Beamish to help the others erecting the mini vintage fair we were putting on for their 1950s weekend.

By the time I got there, they'd put up the Austin Cars and the Frogger stall so all that was left to do was erect the Whirl-a-ball (it's  bit lig pinball).  I'd already taken a photo of the road train leaving our premises: 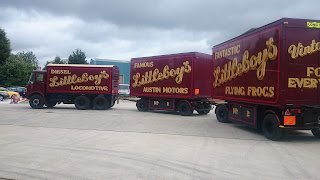 If you've seen it on the road - or worse still, been stuck behind it (max speed of the 1972 Atkinson is 30 mph) you'll appreciate both it's length and awkwardness.  We tend to follow behind it in another car in case something goes wrong... such as one of the air hoses coming off - thus slamming on the brakes on the trailers.... they're VERY good... !

We don't do this thing (running fun-fairs) for a living - it's a hobby (apparently)... or more of a trade-stand I suppose.  This time, it was a 4 day event...   Our stalls do look "nice" I suppose but to be honest, it's not really my cup of tea - running them that is... I prefer to restore them any day. 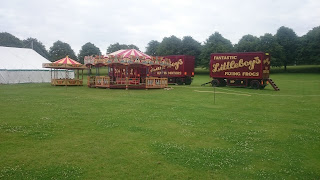 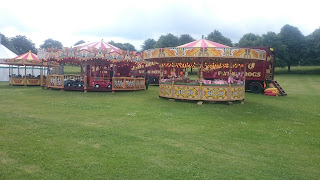 This time, Andy and I were running the Whirl-a-ball  - complete with 1950s costumes... Andy looked ok in his, but I looked a cross between a gangster and Freddie Kruger! 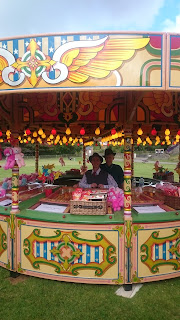 *sings, 1, 2 Freddie's coming for you*... which Gav spent most of his time singing from the Austin car ride he was running 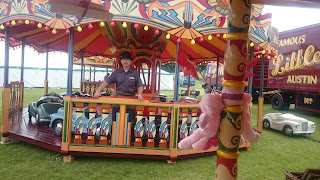 The Austin's is a lovely kids rid - 10 cars (2 with motors that weigh a ton) which are suitable for even the smallest child - so long as it can sit up, we'll run it slow enough for them to have a safe ride.  I don't  really like kids but when I stood in for Gav so he could have a break, I had to admit it was nice to see the pleasure in their faces and watch the parents proudly taking photos or videos. 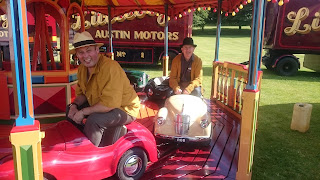 We REALLY do need to have a size limit though!!!

We pulled it all down late on Sunday night and on Monday morning, set off back to Wakefield with it... which took nearly 4 hours...

Thank heavens' that's it for another year.

In other - MORE important news, yesterday I got an email from the builder to say the hull has arrived and he'll be fitting windows, ballast and flooring shortly.... we've arranged to go over this coming Saturday to see it and I'll take some photos to update you then.

Also, over the course of last week, I managed to switch to a new 5 year fix mortgage deal... which should - all being well  see us through the rocky times ahead that BREXIT may cause.  It's not the lowest rate  but IS £75 a month lower than we've been paying for the last 2 years anyway... and of course I'll continue to pay the same amount to reduce balance interest is payable on.  Small change I know, but it all helps.

Great blog post, love the idea of running a fun fair used to work on them when i was a kid!

May I make a suggestion? Don't attach fairleads or similar fittings too strongly. If overloaded, it's better to rip of the fitting than distort or damage the hull.