The last time I used a sewing machine was about 30 years ago... I've a memory of me being a bit of a whiz, on a school mini business project - making xmas stocking decorations.

On reflection, I now feel that was a "false memory" - either that or I've dreamt it!

Either way, it's fair to say that master tailor I am not.   Talk about a faff.   Even threading the ruddy thing up took me about half an hour - the instructions may as well have been in Chinese.  Hmmf.  Anyway... when I DID eventually get the thing threaded up - within minutes I snapped a needle ... lord knows how but I did.  Luckily, Andy's mother is an organised sort and there was a new pack of 3 "in the box" - the box that contained other things I knew nothing of until I started this task.

For starters, there's a stitch un-picker thing that very easily gets jabbed in your finger -   THEN there's the "zipper foot"... I had NO idea what what was until I found a video, made by a charming American lady with lovely nails.    IF you've an urge to make some "box cushion covers", you could do worse than give her 8 minutes and 20 seconds of your time: 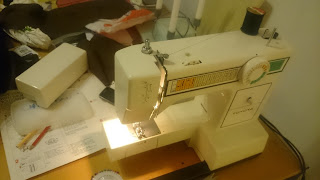 A vicious, evil machine with a mind of it's own!

Before I could get to the good stuff (as in the fabric we bought that was 6 quid a metre) I thought it wise to make cotton covers to go over the foam first.  In hindsight, that was a bit of a mistake as by the time I'd faffed around with them, I was well and truly sick of sewing. 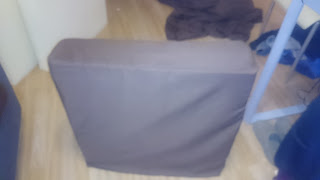 However, once I start a job, I tend to see it through - no matter HOW naff it ends up lol.

It was going ok until this stage: 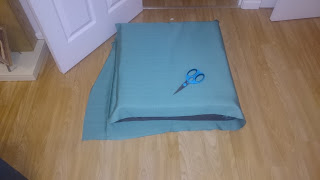 Alas it was down hill from here onwards... 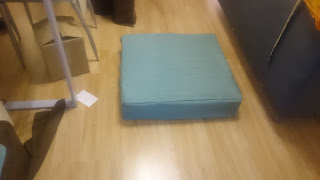 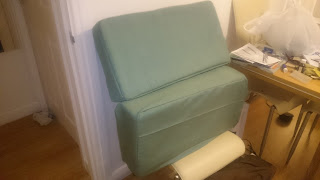 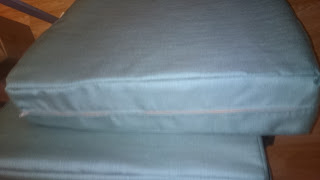 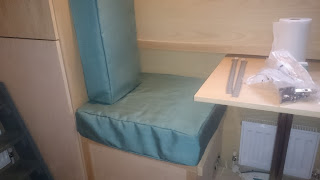 They will have to do for now but once MORE of the boat is complete, I'll buy something a bit more stretchy and have another go - using these as the under covers...  Annoyingly, by the time I'd done the last one (of the 8 required) I'd attained "acceptable" rather than "rough as hell"  "amateur"...

It's been a difficult week at work so I've not had time (or energy) to make much more progesss although I did cut a couple of hanging rails to fit above the calorifier and in the smaller wardrobe in the main bedroom.  Just cheap and cheerful but at least we can hang our coats out of sight now. 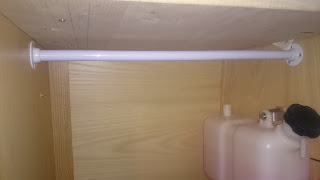 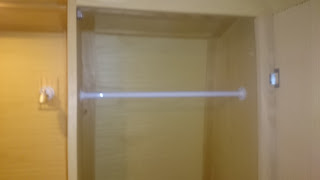 Did I mention btw, the other week I also made and fitted a wardrobe door too? 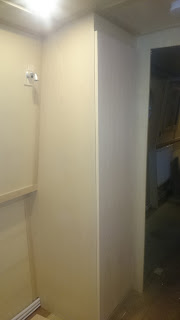 It lines up quite well really, and I'm pleased with it.  I've fitted a shelf above the hanging rail now for longer term storage ... no photo of that yet ...well there is but its in my phone and Andy's took it with him earlier to use the sat nav on it...

Next job, kitchen units in preparation for having the cooker and hob connected.

I've done a few covers, and it does take a bit of practice. The last YouTube I watched was helpful, and I put into practice, and that was to glue on a layer of polyester wadding (as used by quilters) on to the surfaces of the cushion you see, using spray on contact. This takes up the wrinkles in the material and makes it sit better. Also the covers have to be a tight fit on the cushion. Keep watching those YouTubes they are full of helpful information.