IF you are going to buy a "slim" washing machine for a boat, at least check that it will fit through the doors, down the steps and between any bulkheads!

2 of the aforementioned things were not a problem - alas, some ginger person who shall not be named, forgot all about the extra space the newly fitted toilet and wardrobe doors take up - it may only be 4 cms in total but yes... you guessed it - enough to require door removal .  Of course we didn't discover this requirement until AFTER we got the ruddy thing wedged in.

Hey ho.  In the end we got it into where it needs to be and I connected it up temporarily to test it out with the inverter.

I went for the highest spin I could afford find and at 1600 it should be ok.  Apparently you can control it with your phone... although I doubt there will be "an app" that loads/unloads and pegs it out!!!

I realise that is rather a sad thing to take a video of but it's a relief it would run off the inverter - AND given it's rated at 1600 watt, it's showing as using 52% of the available power 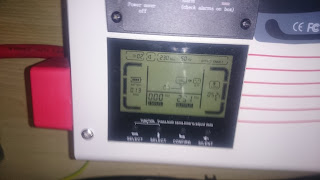 I've still been going to the boat each night after work but as this man flu has now moved to my chest have not done a lot.  Andy  has it worse - he had blood in his phlegm (however you spell that) this morning so went to the docs -coming home with a nebuliser, steroids and antibiotics.  Hopefully he'll perk up a bit now...

At work, I used some left over bits of plywood to make a few more temporary port-hole covers... people can be SO nosey - getting their faces right up to the glass to try and get a look inside - I wouldn't mind if they just asked for a look around.

Cutting circles is easy when you know how (and have the right tools). 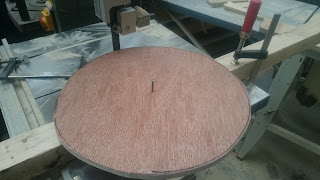 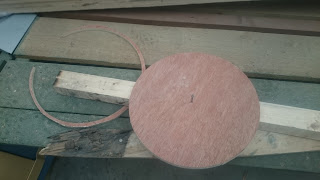 I'm not sure whether to just put a bit of foam over these and then staple some black leatherette on top or try and make the shutters as per my original plan... time will tell on that one.  I have s suspicion Andy will want the shutters making so we'll have to see how it pans out.

What else have I done?

er - I fitted the twin power sockets in the dinnettes and wired them in...along with drilling some holes for the hot air to escape from the fin rads beneath... I think I need to do some more as it's a VERY subtle heat coming up... 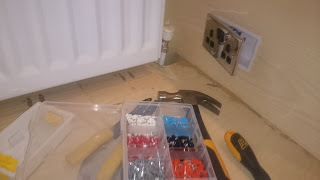 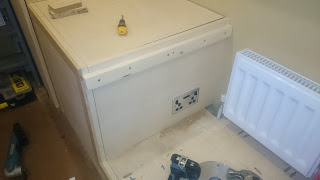 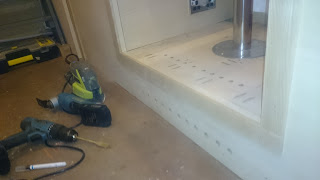 We're planning on cutting up the memory foam mattress to make the cushions for the dineeete tomorrow when I get back from the hospital - I'm seeing the consultant about the carpal tunnel in the morning but we intend going to the boat and spending Saturday night on board again.

Once the dinnette is padded, we'll sleep on it rather than the floor.  If it's a nice afternoon, we may have a chug off the mooring but not far - just far enough to be able to run the generator for a few hours without annoying anyone - I left the inverter on the other day and the batteries are down to about 70%.  IF I get chance, I'll fit the "smart gauge" too...