Having struggled on using those steps I made a few months ago (before I had chance to take measurements) I decided to construct another set.

We'd been climbing over the wood on the boat floor for weeks now and having had the "Christmas tidy up" it made sense to  make the steps rather than take the wood home and plonk it on the garage floor with the rest of the stuff that has been in the way.

I'd originally planned on making a set of those ones with cut outs on alternate sides - that idea was quickly dismissed as we've discovered I'm goofy (in water-skiing terms)... that is I lead from the opposite foot to most people .... WHICH would mean a high chance of me repeatedly going arse over tit stumbling and having an accident.

SO - "normal" steps have been made 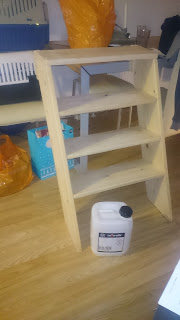 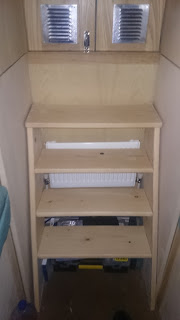 I've given them a few coats with the low sheen Morrells again - it's not slippery and maintains the appearance of unvarnished wood which we like.

It's a bit of a pain doing things that require cutting wood now though - Andy has decreed I make any cuts outside... which means getting muddy on the tow-path or end up dropping things in the canal if I try and do it on the rear counter...  *note to self - GET a SEA SEARCHER MAGNET ASAP*... there are loads of tools currently languishing in the canal by the side of the boat !

I've also gotten around to a couple of those little jobs that get over-looked once you get used to them... for example, the tv in the main bedroom was wonky and needed the bracket removing to get access to the nut on the rear to tighten it up.  Whilst doing that, I decided to put up a blackout blind (longer term we're going to have wooden venetians blinds but I couldn't be faffed with cutting them just yet) - the blackout roller blind did need cutting down but it's quick job compared to the other one. 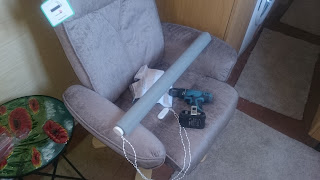 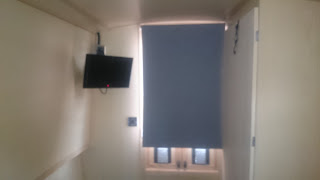 Over Christmas, we've had the pan set balanced on top of the microwave so after work today, I made a shelf and cupboard to "hide stuff away" in the spare space. 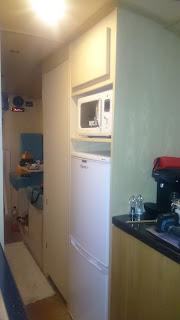 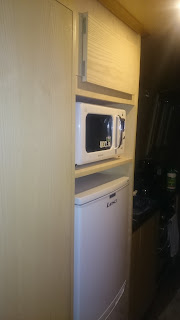 We've also brought the stove on board and have been trying it out in different positions in the lounge - at the moment, the favourite is port... it had been planned to be on the centre line but doing that does make passage through the boat a little difficult - not impossible but it increases the potential for falling against the flu and burning your hand. 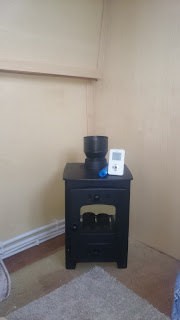 The heating is all well and good but during this latest cold spell, we've had to have it on most of the time and diesel use a side, it DOES quite hammer the batteries.  Yesterday they started at 100% (well according to the smart-gauge) and what with the fridge/freezer, the TV, lights and heating on, by morning we were down to 79% - I've used the engine to bring it back up to 90% followed by the genny and the charger set to 35amp to get it back to 100% again by the time I left tonight - as we're not going to be on-board until tomorrow, there'll only be the fridge and heating (which is set to come on at 5am) so we'll see how they fair tonight .

Once the fire is properly installed, the demand on the batteries will be much lower  - hopefully!

Another easy win is the shower gel dispenser - I've fixed it on with 3m sticky pads AND clear silicone... quite a lot of the latter actually and I'm confident it won't shift. 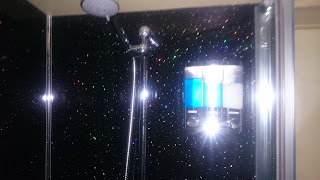 I've stamped my feet at work and I am NOT working tomorrow as requested - instead, I hope we'll have a chug up to town... perhaps having lunch at the Ruddy Duck - we've STILL not been on the river yet and it's time we just got on and did it ... the weather hasn't been bad so the levels/flow are ok.... the longer we leave it the harder it will be... we just need to man up and do it - after all, the anchor is attached and we have self-inflating life jackets.

MEANWHILE - Happy New year to all... Thanks for reading and taking the time to make comments - we really appreciate it.

HNY to you both.. the good 'ship' ellis is looking great & i've really enjoyed reading your blog
all the best
riggers

Happy New Year to you and Andy.
Just an observation. If you want to secure something permanently don't use silicone because it will eventually fail. It also fails as a long term waterproof sealer.
Cheers
Tom

Ah now I remember where I heard about builders adhesive - it was from you... alas, silicone was all I had... when it falls off, I'll stick it up with something stronger.