Well we finally dipped our toe  bow into the river... don't know what all the fuss was about - it was no trouble at all.

OK  - that's not quite true... the river itself was not a problem but "Fall Ing" lock was a barsteward with a horrendous wind attacking me as we ascended.

I'll go back to the beginning...

Our mooring is on the Aire & Calder Navigation at Stanley ferry - which means if we head out on the boat in one direction we can do a couple of locks and boring straight bits before heading out onto the river... THIS is what we've been doing occasionally since we finally got the boat.  On New Years eve I decided to try and talk Andy into "manning up" and us going the other way ... to the Ruddy Duck pub in Wakefield for lunch.

To most boaters, this is an easy hours/maybe 1 and a bit chug.  To us however, it was an adventure - necessitating the connection of the anchor AND the donning life Life-jackets.

It might seem bonkers, but although we've hired boats for a few years, as of yet (well then) we'd never been on a river.  We've kept putting it off - using excuses that there's far too much to do on board to justify excursions.  The wind was a building a bit when we'd finished filling up with water and we NEARLY used it as an excuse not to go. A bit of arm behind the back  gentle persuasion later and we were off.

Having discussed it before hand, once we got out of sight of our boating neighbours, we slowed a bit and both put on the self inflating life jackets I bought a few months back - they're a bit uncomfortable but as I'd checked the water temperature earlier (2.5 degrees) we agreed in the event of one of us going overboard, we'd need them.

We agreed on a "horn blast" code which on the river meant something's gone wrong with the engine so sling the anchor in or in  a lock, something's going wrong drop all paddles immediately.

With that in our heads off we chugged, taking a few photos just in case it was to be our last journey lol. 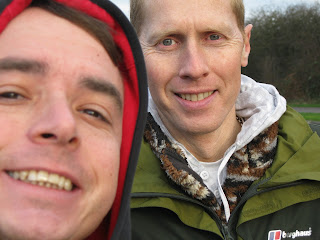 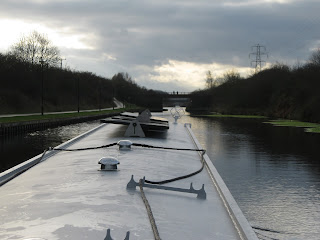 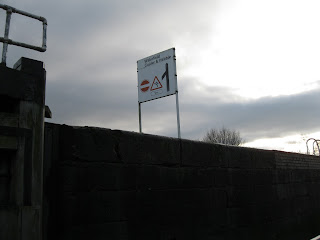 Talk about paranoid ...  I expected to feel a big tug towards the weir on the boat so we shot out of the safety of the canal at decent speed - when no pull was evident, we slowed down and began to enjoy the chug upstream.  It was nice to be able to put a bit of power on and it was pleasing to be able to maintain a good cruising speed against the flow with plenty of power in reserve. 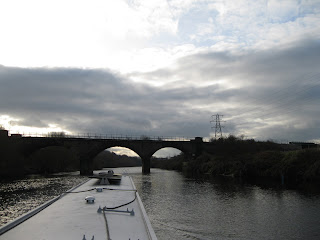 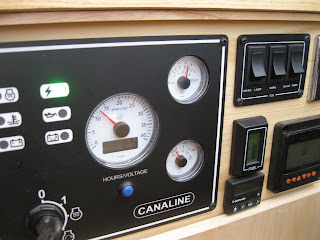 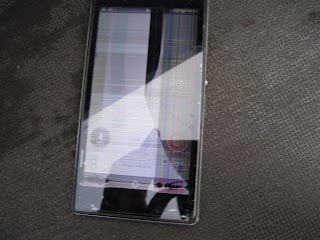 It's a little hard to see from the cracked screen on my sony, but it fluctuated between 4 and 5mph at 1300 rpm upstream with the wind against us.

By now we were enjoying the change of view - although that said, it's NOT the prettiest of run outs...  We did see a couple of herons fishing though. 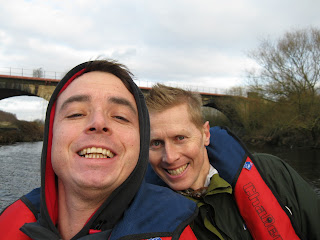 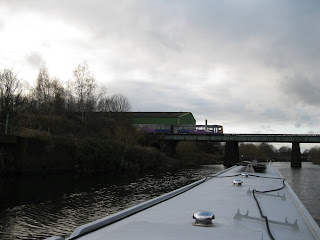 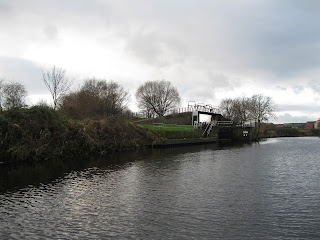 As we approached the lock to leave the river, it dawned on us that we HAVE been in this lock before... only last time it was down a load of scaffolding when CRT had an open day last February. 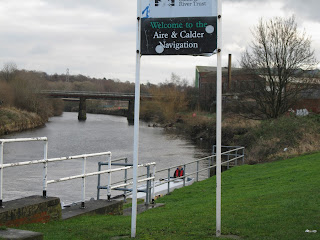 Andy was busying taking photos when he realised that unlike the locks the other way, this direction required the use of a windlass so had to come back and collect one.

Usually when we're going up in wide locks, Andy opens the paddles on say the left hand side and the water bouncing off the other side then holds the boat hard against the left with no need for a rope.

In this lock however, THAT didn't work - instead I was all over the place. In future I'll throw a  centre line over a bollard and keep it tight in instead. 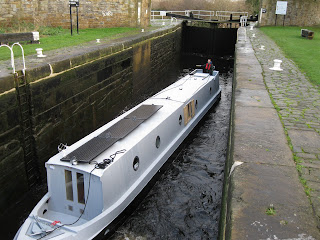 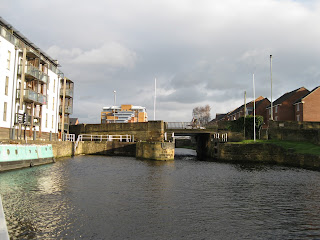 and we soon tied up outside the pub where we had lunch and a couple of glasses of wine. 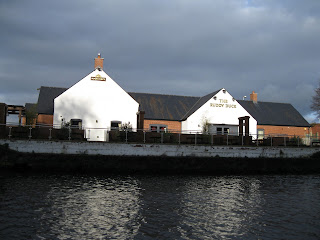 The last time we saw the pub from THIS angle was back in the summer when we met up with Doug and James on "Chance" http://narrowboatellis.blogspot.co.uk/2016/06/a-chance-encounter-and-swarm-of-bees.html

We had planned to spend the night in town but decided against it given the potential for New Years Eve revellers...  suffice to say though, after the wine, the return journey was MUCH less stressful - we still wore our life-jackets though... just in case.

That's it for jollies for a while now though as we really need to get back to progressing the boat.  I DID however fit the fair-leads for the twin centre lines to go through ...  snapping a couple of drill bits in the process, shearing a couple of "self drilling-self tapping" hex head screws too - I ALSO dropped 2 adjustable spanners into the canal in the process.  TIME to get that magnet ordered and go fishing for my tool kit!

Well done, Just think what the river will be like in the summers sun

(not really anon)I've done lots of hire-boating but I can well imagine it feels different in your own (very expensive) boat. The 1st time I went on a river it was the Calder at Brighouse, pretty tame, eh? but then after going down Fall Ing and heading towards Castleford our engine overheated and packed in. I knew from the map that round the corner in Castleford was a weir, and, like you, imagined being drawn towards it by current, and panicked a wee bit. I reached the river bank and shouted at one of my friends to jump off and hold her in. She was not amused. SO GLAD you didn't have need of the self-inflating life jackets. Heather

Although many locks behave as you indicate some have a different effect and there is enough of a flow to push the boat away from the nearside wall rather than into it. Only experience will tell you which is which although the greater majority are just fine. Also a few change the effect as the lock fills and just as you think you are OK then the boat drifts away! By that time however it is less fierce and sufficiently well up for the steerer to hop off with the centre line. A good precaution anyway. In the end it is all down to how the lock designers decided the water should flow into the lock. Watch for the few that let the water in all along the lock or even from the bottom. Definitely ones for a high I-Soy score!