Before we undertake the 'fire-fitting' project this weekend, I've called in on route home tonight and fitted another 12v socket and 5v usb charger.... THIS time, in the rear cabin opposite the control panel.

This location was chosen so as to be able to keep phones plugged in and charging whilst chugging along and within reach.  It'll also be handy when using the dinette table as a computer work-station. 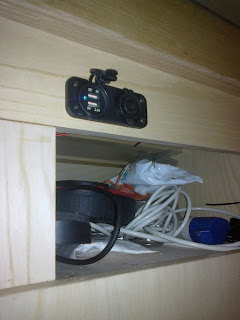 please try and ignore the clutter that seems to have made itself at home  be temporarily in my cubby hole!

It will also come in handy as a place to plug in a little flexible USB powered LED that Andy's mum gave us on our last visit to them...  they picked a couple up in IKEA and they're perfect for subtle background lighting OR for reading. 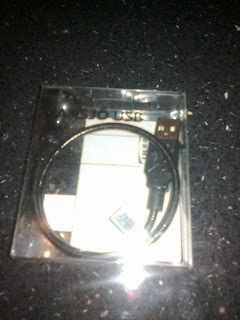 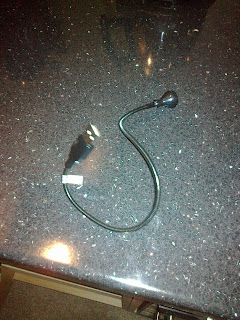 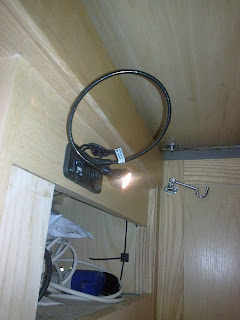 They draw beggar all power and when it's dark, offer a nice localised alternative to having main cabin lights on...  in fact, for the money (I think they were either 2 or 4 quid each) they're smashing little lights.  We've since been and bought a few more so that we can have a couple in the lounge at floor level. 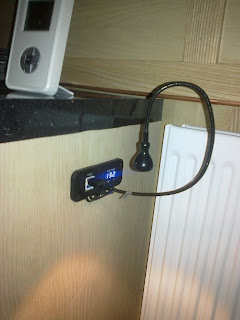 IF I'd worked out how to turn the flash off on my phone it would have helped of course!

I've not had much time to do anything else on the boat but I did finally get around to ordering the toilet tank, pipe work, connectors and a charcoal filter...  These all arrived yesterday. 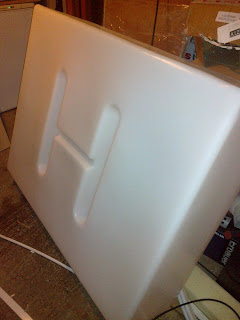 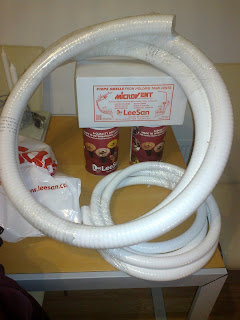 Well I say ALL - I forgot to order the tank fitting kit for some reason... when I phoned up today to
complain  enquire where it was, I was told everything I ordered WAS sent...  and as it also transpired I'd NOT paid for it either, I had no where to go.

The woman was very nice however and accepting I'm a moron, she very kindly agreed to send it out (for the 107quid) but NOT charge carriage as it appeared a genuine mistake - people can be so nice... of course had she known I'm a ginner, it may have been a different story!