Experimenting with "heating fuels" and another sad loss

It's been a very busy week at work - we're having to go back down to Margate again on Sunday afternoon until "whenever the job's done" to pull down the speedway we repaired back in July... that ruddy thing seems to be cursed as whenever work is planned on it, someone dies.

Back in July in was my best friends mum... THIS time it was Les of NB Valerie.   http://boatlife.blogspot.co.uk  I've been a follower on his blog for many, many years and whilst having never met him, have exchanged a few messages on Canalworld forums.  He'd put up a brave, realistic and well humoured fight against the bastard cancer... supported by his wife Jaq, between them they have been an inspiration to many others I'm sure and judging by the reference's and tributes paid in many of the blogs I read, he'll be sadly missed.  Condolence is a poor word but my thoughts are with his "princess" at this time  - Les had done as much as he could to teach her how to manage the boat without him but I'm sure should the situation arise, there'll be a queue of boaters wanting to help.

As you'll remember (if you read my most recent posting)  - LAST weekend I finally fitted the stove.

It's been a steep learning curve "playing" with it this week after work...   in fact, once again tonight, I'm sitting here on the boat in my pants with the windows open as it's not gone quite according to plan.

I was brought up with open coal fires in a draughty house...  a multi-fuel stove in a well insulated boat is VERY different beast it seems!  Each night this week, I'd set the heating for 1 hour before I was due home from work (to take the chill off the boat) and as soon as I arrived I turned it off and lit the fire.   Having very soon worked out getting it up to heat with logs then putting on coal (this week has been a trial for "Blaze")... NOT for any reason other than the petrol station I stopped at on Monday night only sold that type!

It's not very good - perhaps it is a damp bag but it takes ages to get going and sits there sulking for ages if you reduce the bottom air flow.  On the plus side, it does last a long time - just not chucking out a LOT of heat.  I did manage to keep "a couple" of embers going for 20 hours but NOT enough to enable re-lighting without the use of a fire-lighter and kindling.

The wood (just off cuts from work - some of which is 100 year old bits of racing track - others 60 year old ghost train floor) is burning lovely and DOESN'T blacken the glass... unlike the ruddy "Blaze" has done.

Tomorrow, after work, I'm going to look for some other kind of smokeless to try out...  Andy is also nagging me to make some kind of a log/coal store to sit by the fire... HOWEVER, having used up all the heat-proof board I bought, that will have to wait.

Assuming Margate goes ok, NEXT weekend will be toilet tank fitting time... I'm NOT looking forward to that but once I get started I'm sure it will go smoother than the stove fitting... won't it?

Oh btw - I Did manage another shutter this week 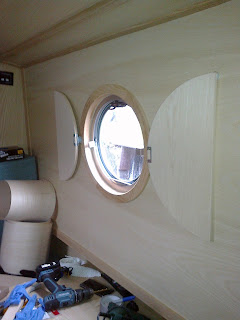 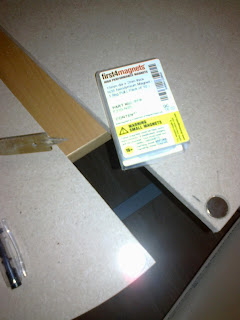 I've 'sunk' little magnets behind the veneer to hold them open  - it's meant screwing washers to the side (a temporary measure as I'm going to cut to diamonds at work and paint them in the same colour we end up using for the internal parts...)