What a week it's been!  I am too old for this kind of thing - the kind of thing I'm referring to being the pulling down of fairground rides in the middle of winter.

After the weekend on the boat, around lunchtime on Sunday I got in the car and drove down to Margate - it could have been worse but still took over 5 hours driving without a break.  I hate that road... SO tedious.

The plan was to meet up with the lads at work in the hotel bar around 8  and have a pint or 2 before an early night in preparation for dismantling and packing away 2 rides over the course of the week.

THAT didn't happen... mainly because everyone else set of an hour AFTER I did and their journies ended up taking around 8 hours thanks to a combination of road works, road closures and accidents.

MY evening wasn't much better though... 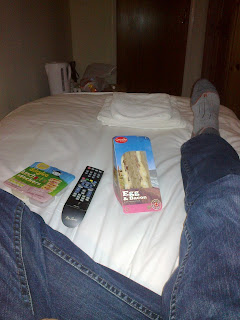 I had dinner in my cell  budget single room... it was grim!

On Monday we began dismantling the smaller ride first - the Austin cars... you might recall they're the ones we took to Beamish in the summer.  We've got them on Hire to Dreamland in Margate (or rather we did) but they're doing some ground works in February to install new drains so they wanted us to move them.

Once that was done, we also had to take down the Speedway we repaired  last year - it needs a proper service and repainting.  Due to the miserable conditions, I didn't take many photos... well that and the fact I was sulking quite a bit as the boss had been on the phone and made a comment along the lines of "is that all you've done?" - not REALLY the way to motivate 4 middle-aged men who were aching from head to toe and freezing to their bones in the drizzle.   I managed to bite my tongue... JUST.    I am SO close to walking away and leaving them all to it. 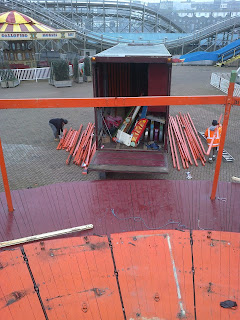 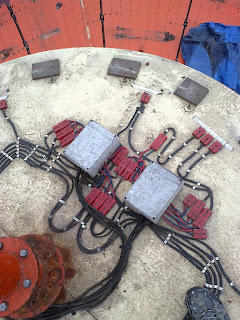 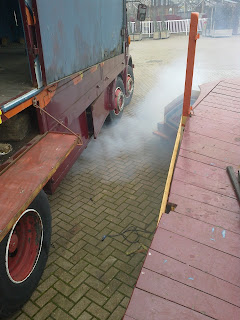 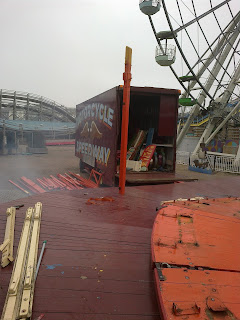 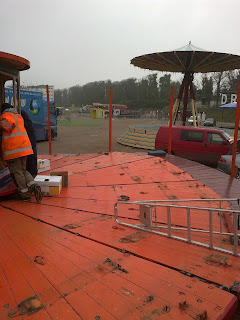 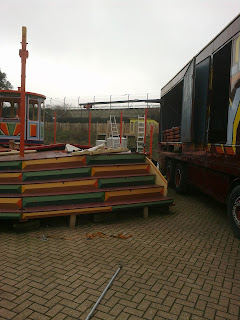 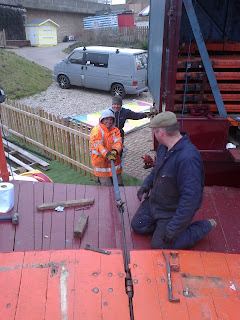 The tilt (that's the name for the "canvas cover" that goes over the ride was rather heavy so Gav and I managed to cadge a lift with a passing tele-handler...  it's a good job we've not heard of "elf and Safety"... 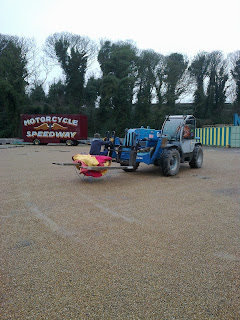 We travelled back last night and went to work as normal this morning... all a bit fed up to be honest.

I've decided to stand my ground and NOT work this weekend... instead, the plan is to fit the toilet tank and macerater toilet on the boat...  Tonight when I finished work, I called in to light the fire  and then filled with water and turned to bring the right side of the gunwale to the bank side in preparation... given the winds forecast for the weekend, it seemed a logical plan.

great pics of your Margate job.
I follow a v friendly blog* written by a 'continous cruiser' and have learned they spend a lot of time/effort filling water tank, fuel tank, emptying toilet, getting rid of rubbish. Not like living in a house, is it? (*nbLillyanne)
Heather pedalboats