Do Not feed the ducks...

Well not on your home mooring... CERTAINLY not if you intend to live on it.

I know this now...  I didn't know this a few weeks ago when Andy bought a big bag of bird seed and began feeding the swans, ducks and moor hens from the side hatch.    As a result of course, we're being terrorised by a couple of evil quackers that are frequently 'demanding food with menaces'. 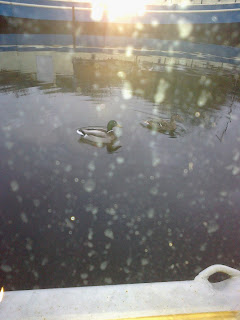 Seriously though, if I ignore them... for more than about 2 mins, she begins making an almighty noise and he begins trying to drill his way through the hull with his flat beak!

The swans are more direct when the window is open though, happily putting their heads through to have a look around and demand seed.   It'll be interesting how the cats react when they come on board!

Tonight was no exception - I called in on the way home from work to light the fire and charge the batteries... the solar has been keeping up with the fridge-freezer whilst we've not been on board until today when it dropped to 75% according to the smartgauge.  I'm not totally convinced of it's accuracy but it's better than just "guessing" their state of charge.  I ran the engine until they reached 90% and then switched to the generator whilst I did a few jobs.  It seems wasteful running the engine above 90% knowing the charging current has tailed off... the generator/charger will keep the oil-changes down.

Due to work being so all consuming at the moment, I've not done a lot this week on the boat  - mainly testing out the new loo (don't worry - I didn't take a video of the ACTUAL test ;-) ) - suffice to say I was quite amazed at how well it coped... especially as at one point  it  looked like  I needed to beat it with a big stick!

I HAVE tidied up the wiring/piping in the wardrobe with retaining ties so it's not quite so messy now.
I've also raked out the initial attempt at sealing the flue into the roof collar as a bit or tar was running down the outside of the flue INSIDE the boat if you follow... this hasn't worked as I noticed a little mark again tonight.

With this in mind, I've set the heating to come on tomorrow afternoon so when I decamp to the boat on my way home from work, it''ll be nice and warm inside whilst I have another go with fire rope and heat-proof silicone on the roof.

AS for the weekend - Andy's brother is planning a visit on Sunday we think so we're going to "play" on the boat rather than do anything... I might measure up how much flooring we need as a contact of mine has some Ash hardwood samples for us to look at - we'd considered bamboo or solid oak boards but if he can get ash, that might be preferable

MEANWHILE - tonight I need to catch up with "Unforgotten" on the tellybox ... I do like Nicola Walker.

Sounds like you need a double skin chimney for out side. That would get rid of your tar problem. I think ours is only sealed with rope and nothing else. Not seen a trace of tar inside or outside the boat.