As promised, on Friday night I arrived at the boat after work (with my weekend bag) - *read 2 pairs of pants and socks...* planning to rake out the seal between the flue and roof collar.

I thought I'd set the heating to come on so that at least I'd have a warm boat to go into once the job was done...  fat fingers struck (striked?) again - in that I'd NOT set it to come on.    Undeterred however, I stuck to the plan and climbed on the roof and began raking it all out (again)...

This is the stuff that's appearing on the inside 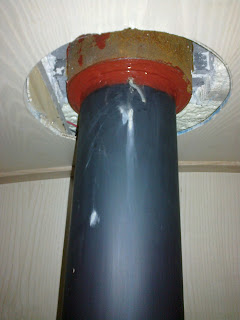 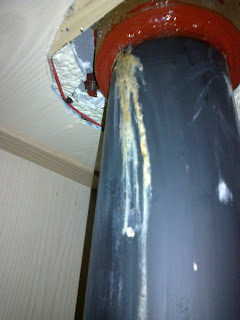 IT looks worse in the photos than it was until I tried removing it with kitchen roll... It still shouldn't be there though as surely if tar can run down the inside then fumes/the deadly co gas can blow back down too?

Another cafuffle of a job - I used a tent peg to remove the now "set" fire cement I'd initially jammed between the flue and the collar.  Once removed, I  began with a layer of heat proof silicone and then rammed fire-rope in... lots of it.  I carried on filling with the silicone and then another length of fire rope and topping off with a final layer of heatproof silicone... a bit like making a lasagne I suppose.

Just as I was finishing it, a chap a couple of boats back came home from work and on enquiring what I was up to, pointed out I was wasting my time and that if I left it about 6 months or so to bed in,  all would be fine... in the meantime,  he suggested wrapping kitchen roll around the top of the flue and changing it daily.

I'm  NOT going to do this - I'll clean it up each day by all means but risking kitchen roll on a very hot flue doesn't sit comfortably with me.

ANYWAY -  he must have a point as it's back again this morning!

JOB wise on the boat, we've done nothing this weekend... On Saturday we went off for a chug - mainly to charge batteries.  THIS time, we switched roles leaving Andy to steer and me do locks.   It went well enough but the wind got up on our return journey so we decided  rather than go back to our mooring we'd moor for the night the other side of Stanley Ferry... so that we could do a water fill and rubbish disposal run on route back Sunday morning.

In hindsight, this wasn't such a good idea - we "picked" a spot against the metal piling and thought  it'd be ok.  How wrong we were.... the wind increased and proceeded to slam us into the side time and time again all night...  At 2am I was outside in my undies and raincoat trying to tighten the ropes enough to stop the constant noise.  To no avail so I sat up watching rubbish tv all night unable to sleep - by 4.30am even Andy (who could sleep on a washing line) had given up and between us (this time fully dressed) we bow-hauled the boat further along into a more sheltered area and the noise finally abated.

Next time we'll do it sooner!

By morning proper, we moved the boat to the service point and carried out the planned chores - I must admit to being proud of my mooring in the strong wind... AND at being able to cast off again on my own.

Whilst the tank was filling, Andy's brother called to say they were bout 40 mins away so we stoked the fire up and went home to meet them.

On returning to the boat with them, we'd planned on a little chug out - AS the weather was now Windy AND wet, we got as far as the pub for lunch hoping it would improve whilst we ate... it didn't so we turned and went back home.

Other than keeping the fire in and doing a bit of charging I've not got much planned for this week on board - we're taking the ride down at work  so it's going to be full on.

do you have fenders to soften the knocks when you're moored? Hire boats tend not to have them but on one holiday I had the experience of knock-knock-knock all night and made my own temporary ones with rope and plastic pop bottles. some boat owners use old tyres. Tar: it's good to have neighbours, and I hope he's right. Heather

Yeah we do have fenders (well a few left that I didn't trash on xmas day) but I couldn't get the darn thing to "stay" where it was needed... On the home mooring, we've got tyres (4 of them - low profile pirellis if it matters) tied to ropes on the mooring rings which work a treat...