Don't worry - the two are NOT related!

It's typical isn't it? - Friday was a lovely dry (if windy) day that'd have been perfect for sawing wood on the tow-path... Saturday on the other hand was grim at best - ruddy awful for most of the time.

AS such, it rather put paid to my original plan to do some more boxing in of the pipework.

Instead however, I decided to fit come recessed handles I'd ordered from our Chinese friends (at less than half the price of the identical things from Ironmongery direct).    I can't for the life of me find a photo of them but they're about 50mm in diameter that sit flush with the front of the door...of course even though they're now fitted, HABIT means we are still opening doors using the top and bottom corners!  These are the things....  http://www.ebay.co.uk/itm/112127760933?_trksid=p2057872.m2749.l2649&var=411738915767&ssPageName=STRK%3AMEBIDX%3AITvery good value for money

Having taken a good look at the doors it occurred to me it was no wonder they were looking grubby....I remembered that I never got around to varnishing them properly... SO - I made a note to do them on the next dry day... mainly because they'd need to go outside for a proper sanding.

As the weather was still manky, in a bid to progress with the "gas" I finally got around to making  list of the the various adaptors I think I'll need to connect it all up... spending the best part of 100 quid before the bubble tester and regulator.  With this in mind, Andy decided that whilst I THINK I am capable of doing it, he would be happier with a proper man on the job (the cheek) so I was ordered encouraged to find a gas-safe registered chappy with the appropriate "tick" in the boat box!  - he's coming at the weekend to quote... I know when to concede defeat.

THAT said, I decided to sort out the wiring and switches for the ignitions  - 230v for the hob and 12v for the oven.  That meant a trip to Halfords for some more fuses and B & Q for a couple of single patress boxs and spurs.

Whilst buying fuses, I also got sufficient for the various 12v car sockets/usb feeds that have been popping up around the boat (ahem - which up until now I've ignored
) 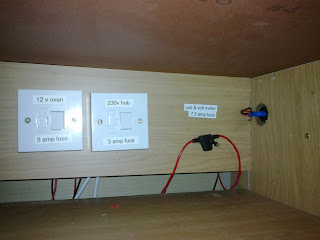 This is in the back of one of the kitchen cupboards - ignore the slightly wonky socket... my back is bad at the moment so it was a bit of a struggle.

I've gone around the other ones and connected in-line fuses with a 10 amp mini fuse in each.

Feeling rather pleased with my "electrickery" connections I finally got around to looking at the ballast.

Soon the gas will be connected and cooking will be more civilized... although I must admit, on Friday night I again, cooked dinner on the fire - 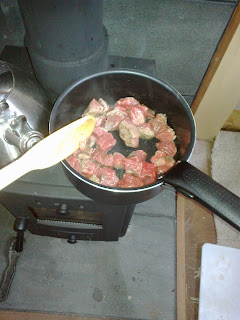 this time a stew with dumplings and various vegetables... and I suppose using FREE energy given the fire was on to heat the boat anyway.  On a morning now, I'm able to get out of bed to a warm boat, chuck a few sticks on and a log and within 15 mins, have a cup of tea from water boiled on the fire...

So about this ballast...LIKE most boats, Ellis sits lower to the rear thanks to the engine /fuel tank and calorifier.  The builder had ballasted it accordingly but didn't take into account the extra weight the dinettes and 3 or 4 bags of coal/3 jerry cans of diesel sitting in the rear lockers.  With this in mind, I took my multi-tool to the floor in a bid to remove some of the blocks.

WHAT an awful job that was.  Having built the cupboards and dinette seats on top of the floor, it meant I could only cut a small section under the rear hatch. 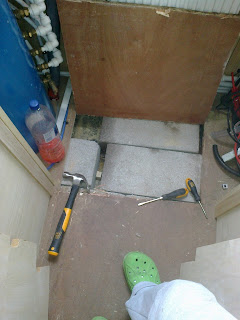 Access to the blocks was difficult to say the least... in the end we managed to take out the 3 you can see here, followed by 1 each side "under the floor".  It's only an estimate but I should think they weigh somewhere between 20-25kg each and for now they are in the gas locker.  The effect has been to allow the rear (skeg I think it's called) to lift about an inch - it "looks" less severe now but could still do with a few more blocks taking out to lift it further. 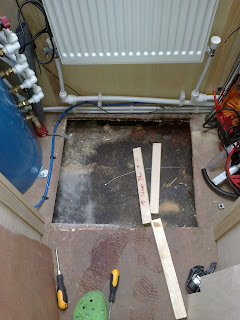 Given that we can't reach any more from this section, it'll mean ANOTHER hole being cut a further forwards to gain access...it'll have to wait until the weekend though as it's too physical a job to do after a hard days work - work which we're not talking about presently as grinding us all down.

With the 5 blocks in the bow gas locker, the boat IS sitting much nicer at the front which leaves me with a bit of a dilemma .  Ideally, I'd like to keep the weight in there but they blocks are a bit bulky.  I intend taking up some floor in the front bedroom to see if there is any space to accommodate the blocks but I very much doubt it ... I DO recall seeing an advert somewhere for some steel ballast that purports to be heavier and smaller than the blocks.  This might either sit in the locker better, or be able to fit on top of the blocks under the floor...  Another job for the weekend.

Oh -before I go (the bath is nearly run now and it's been a very long day) on Sunday morning, about 7 am I was opening the shutters and spotted a ruddy squirrel helping itself to Andy's "squirrel proof" bird feeders.

Unfortunately, my old Nokia (think "Fisher-pricer my first phone") doesn't take very good videos but if you DO  have good eyes, you can JUST about make out the little git  cutie, having his breakfast.


Of course I made the appropriate noises pretending to try scare him off but if the truth be known, I like squirrels so will just buy MORE nuts to even things out!

If your ballast was installed like ours, then I knocked up a timber 'T' which I then used to drag the ballast across the baseplate to the hole.

That sounds (well reads) like a good idea... I'll try that at the weekend when I make my next hole - I can't use the existing one any more are the bears from port to starboard prevent me reaching the next compartment if you follow.