I can't believe tomorrow is Friday already...  this week has flown.

We've finally dismantled the racing track ride at work and have now dragged the Caterpillar off the shelving to restore.

It's a total wreck.

Realistically there's not a snowballs chance in hell it'll be done in the allotted 8 weeks - it'll take that long to get the bottom spider re-made and painted, let alone the cars, canopy's and gratings. 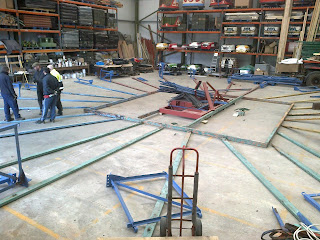 Within days we're going to falling over ourselves again.

ANYWAY - Back on the boat, although I've called in each night on the way home from work, I've not had to run the engine since Sunday to top the batteries up... this is because the Solar is now keeping up with the fridge/freezer AND the nightly electric kettle boil for my tea whilst I get the fire going.  Tonight, even with storm Doris doing her worst, the panels were still inputting just under 5amps at 4pm.

I DID however have a bit of a smoke bomb thanks to the tip cat (if that's the correct term for the hat thing on top of the chimney outside) acting like a funnel in the wind  - which in the end blew my newly lit fire out.  I re-angled it and then lit it again with much better results.

Earlier in the week, I cut some of the ash board at work (where there is more space to manoeuvre) and last night HAD planned on making a start at boxing in the pipework in the lounge.  It might have been an idea to measure the height rather than "guess" as I'd cut it too big, meaning the boxing was higher than the mains power sockets DOH!...

Having learned my lesson, today I cut a couple of sections for the bathroom to the correct dimensions and began the boxing in. 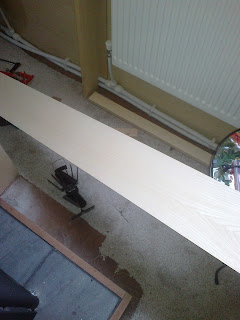 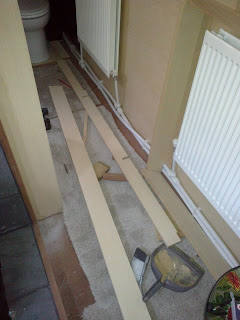 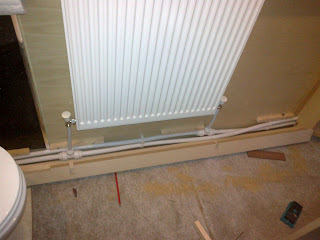 I HAD planned to screw the section in to place but decided we'd just end up with screw holes full of dust in no time...  Instead, I  plugged in the glue gun and applied a reasonable sized blob to each of the 4 battens I 'd screwed to the wall earlier...  THAT way, there'll be no obvious "fixings" on display but it will still be possible to remove and re-attach the boxing without causing any damage. 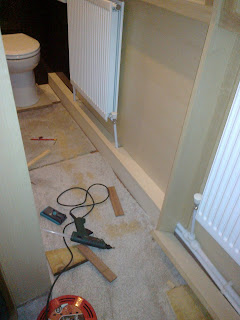 Ignoring the mess on the floor, I think the end result is ok.  At the weekend, I'll try and do some more and get this varnished.