A matter of drainage...

After a week from hell at work, I stood my ground again and refused to go in on Saturday...  The ride is still only half taken down (even after today's effort) but everyone is worn out and as we don't yet have the steel for the next one, we'll not fall any further behind!

SO - on Friday night after work, I went straight to the boat and had a bit of a tidy up - when I'm calling in during the week and doing "stuff" I tend to leave both tools and detritus everywhere.

You may recall, we still haven't got the gas connected up and I planned to work out how many of what kind of connectors will be needed to do it.

It appears the builder when requested to fit a single length of pipe from the locker to the oven, opted for 3/8ths rather than 10 mm.  Which turns out to be a pain as finding the fittings is proving very difficult.  NOT helped by the fact, the blooming hob is 1/2inch!😒

I've abandoned it again for now and will come back to it soon.

ANYWAY - Drainage.  FOR whatever reason, when the boat builders were assembling Ellis' hull, they put a drain at the FRONT of each of the rear lockers...(I think it must have been the YTS).... as such, due to the angle the boat sits in the water they don't do their namesake.  Instead, approximately an inch of water builds up and eventually I get around to mopping it out.  I've managed to ignore this until I began keeping bags of coal in them... and of course now I end up with a right old mess. 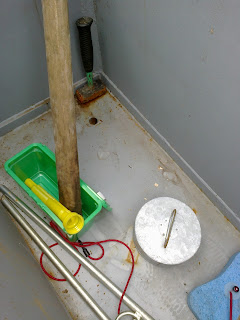 Having mopped out one of them (note the sponge on a bungy cord I bought at Crick last year) I set to and drilled a new hole at the back where the water had been pooling...  well not exactly at the deepest point I admit but THAT was directly over the webasto and I figured if it went wrong, I might break it...

SO, a 20mm hole was cut through and I then "wedged" a small section of 15mm plastic pipe through the hole and held it in place with some epoxy putty I bought for emergency use. 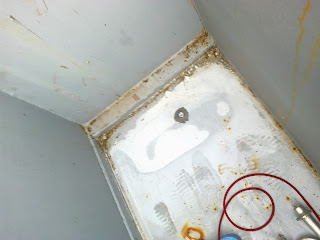 It looks a bit rough now, but once it's had a few coats of paint will blend in well (I hope).

My original plan HAD been to cut into the existing pipe in the engine bay and fit some kind of "T" to keep the exiting hole connected.  On closer inspection in the engine bay, I discovered the steel pipe was a bit big to use any of the bits and bobs left over so  I had a quick design review.  The outcome being and elbow (increasing/reducing) connecting a bit of 22mm pipe with another elbow on the other end slotted over the lip and into the existing counter drain. 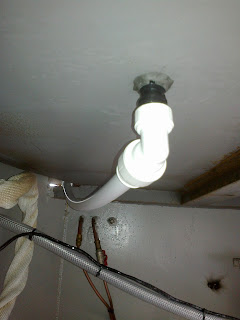 I also reinforced the piping with some more epoxy putty and some self amalgamating tape (I'm tending to use this on EVERY water connection on the boat... just as a back up).

AS yet it's not rained so I don't know if it works... I had thought about tipping a load of water in to see but got distracted by a sheep dog that suddenely appeared on the back of the boat - it was Daisy, Mick's dog who wanted a doggy treat... which (even despite NOT having a dog) I seem to buy whenever I go shopping...  to give to various dogs that come to say hello.

Writing of feeding the wildlife - Andy bought some bird feeders the other day - along with a nesting box which he's put opposite the side hatch... it's a perfect position to sit down in the boat and watch what's going on.

Alas SO far, all he's attracted is a flying rat but I'm sure "proper" birds will come... 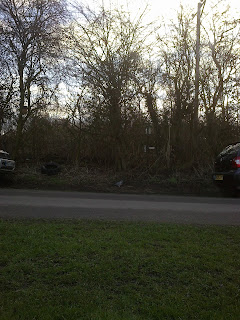 On Sunday morning, once I'd stoked up the fire - I decided to have a go at breakfast on it rather than the camping stove.  It may look a bit precarious ... (and I wouldnt do it if the boat was in motion) but it was perfectly easy to fry some bacon and boil the kettle . 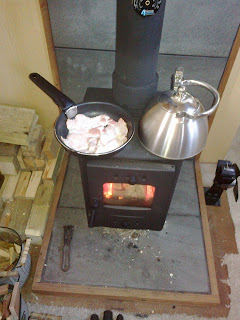 I'm going to HAVE to get organised and sort out the hard wood flooring asap - using off cuts of carpet is driving us both mad.  BEFORE then however I REALLY do need to get the gas connected.  Perhaps it's time to look for a "proper" man to do it