It's Thursday night and we're worn out -having had the week from hell trying to get the ride we've been working on (for what seems like forever) since the end of May to "test state" and out of the door.

Today, the adips chap has been for a good look around and in principle has "passed" the working car.  This means it's time to dismantle the thing so we can get on with the Caterpillar and refurbishment of the Speedway we brought back from Margate the other week.

To be honest, it all feels like a bit of an anti-climax.... having spent months of our lives trying to get this thing done as best we could (from a pile of scrap in a field) to be taking it down with only 1 operational car (and even THAT isn't all there) is a bit pants.

Such is life I suppose...  I've been digging around looking for old photos of the thing - in reality, aside from the car bodies, axles and chassis, just about everything else had been re-made. 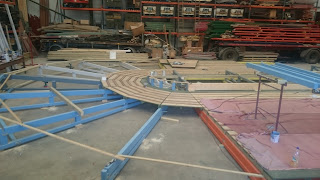 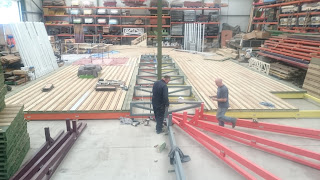 The track is a tilted into saucer shape (like the original Brooklands I suppose hence the name) and the power is delivered to the cars via pick ups under their floor.  A bit like a dodgem track - the difference being that bother positive AND negative are dlivered from the floor.

This is achieved by having strips of metal on the floor, separated by  wood and 4 pick ups on the car spaced at the corners and centre of an equilateral triangle... supposedly this avoids the risk of being stuck on dead spots (wood) on the track.

We had to re-make ALL the track using 1 section of "straight and 3 cheese sections dragged from under a hedge as templates...  in hind-sight, it appears this wasn't the best idea as the 'templates' turned out to be a bit ropey.

To get the power to the motors, we've attached steel to the top surface and bus-bars under each section which are joined together with thick wires.   As it's DC it's been handy having read my boat bible as I could calculate the voltage drop for each section etc.  USING my boating brain, I've doubled the thickness of wire "just to be on the safe side" and it's more than capable. 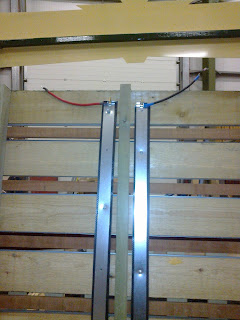 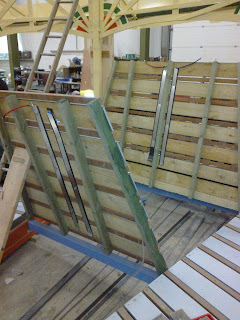 One of the chaps at work spotted a potential danger however of NOT having the top of the busbars insulated... in that someone could drop something onto the track which half fell through the holes and then touched opposing piece of track and either give them a shock or blow a fuse- the latter being preferable... generally. SO we used damp-proof membrane to create the insulation.

Once the 3 pieces of track have been connected together, they are then attached (via a big fuse) to the "big bus-bars" running down the centre of the track. 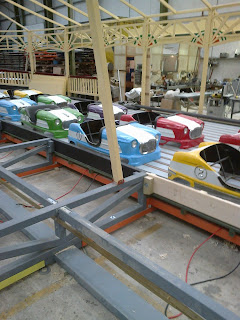 the corners get a bit congested though... 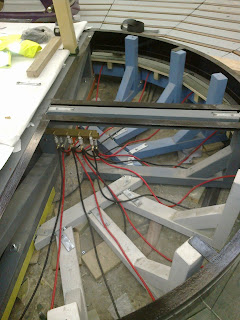 TODAY during a test, a cro-bar was accidentally left on the track (by Andy as it happens but we're not pointing the finger of blame) and it a) welded itself to the track and b) blew the MAIN fuse.

The power is supplied now by a 3phase feed going into a transformer which outputs 110vdc.  This is "turned down" in chunks to give 5 speed settings.

As I mentioned earlier, there are 4 pick ups on each car - here you can see 3 that are being attached - the 4ths goes in the middle... 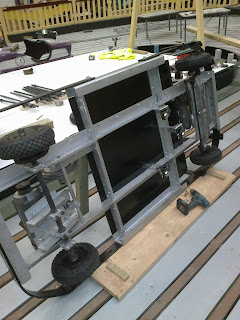 It's a noisy ride with even just 1 car going around... by the time all 11 are up and running it'll be deafening

I SAID IT WILL BE DEAFENING 😁.

Alas, tomorrow we continue taking it to bits and will "assemble" the remaining cars in the coming weeks - along side re-constructing the caterpillar.

We're all very tired, fed up and not enjoying it...

On the plus side, when this run of orders is completed, I'm going to begin working 4 day weeks and take on a conversion project... turning 2 apartments into 1 house.  Grade 1 listed which is a bit of a pain but it'll be different.

BOAT wise, tomorrow night we'll head straight from work and I plan to make some shelves for my electric cupboard (mainly to hold tools and the like) and make a start on working out what gas connectors I need to buy.  I've also got a new fuel tank "washer" to fit as the original one seems to have been damaged - I've currently got a bit of plastic held down by chain over the fuel filler cap... not pretty but it's been doing the trick (I hope)

How can that be safe with 100V DC on metal plates for you to walk on / fall onto? Surely the electrical safety regulations must have something to say about it? 100v on a building site is not really 100, it's 50 - 0 - 50 with centre tapped ground. This looks far more dangerous ... just curious.

Essentially, it's not - GREAT care is required... the buyer will have to put up signs warning folk etc. It's ok to walk on in rubber soled shoes but I admit, I wouldn't walk over it in flip flops - just in case my toes were hanging over.... HOWEVER, because it's "Heritage" it gets passed. It's not TOO different to modern dodgem tracks with both + and minus on the plates and also includes diodes/rectifiers in to ensure they don't blow themselves up.

I'm sure Andy left the cro bar on purpose, to test the safety systems. He's just being modest.
My 'boys' are dealing with 2 enquiries for pedalboats from existing customers and I wish they weren't, to be honest. After years of getting by with few orders, now they are pensioners and not in the best health, people want boats. I'm worried they'll spend cash starting the boats and then not be able to complete. Your energy and techy know-how is SO impressive. Heather

Cheers Heather - alas my energy and know how are pretty much running out now ... AND I heard today that once we finish the caterpillar (in around 8 weeks) We'll be finishing the orton and spooner waltzer/ark refurb. WHATEVER happens, I AM taking 2 weeks off work in June to go to Skipton on Ellis!