Well so much for the "winter blast" - OK it was a little windy here and there but nothing like as cold as had been forecast all week... I feel cheated!

I wouldn't care, but I made sure the diesel tank was full, the batteries well charged and water tank full in anticipation of a mini ice-age.  Oh well.  At least being on the boat from Friday night until Sunday evening meant we made a bit of progress  here and there... we'd have made more had we not kept stopping work (I have to cut things outside now as it's been decreed no more cutting/sanding can be done inside) and chatting to passers by.... trouble is though, I'm not very good at remembering faces so it's always a surprise when someone continues a conversation started on another day  - I play along and hope I've not exaggerated my general fabulous-ness 😇

You'll remember the plan had been to have a go at making a shutter to cover the portholes.   I'd measured the external dimension of the liners the other day and bought some 12mm mdf.  I thought about trying to source Ash or Poplar 45cm diameter circular disks but had a change of heart when I was given a quote from our timber supplier at work.

SO - instead, I ordered some iron on ash veneer (either Amazon or Ebay - I forget) and set to covering them. 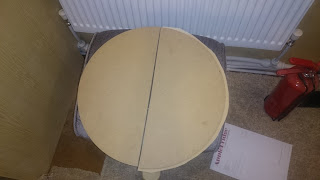 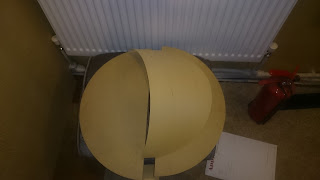 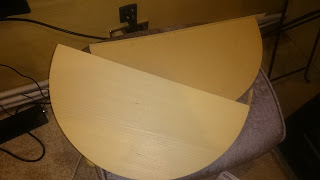 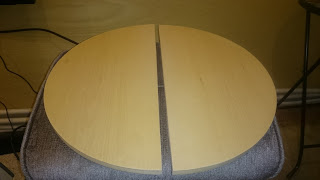 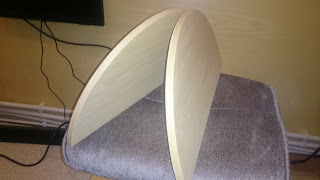 I'm getting better at obtaining a decent finish now via a combination of applying a wooden block after application and then gentle sanding of edges... they bond together quite well and once it's varnished with the Morrels low sheen lacquer, it will look fine.

Fitting them was easy enough - I used cranked hinges again although I must admit, whilst they do the job, the ones I have are not as robust as they could be...  I think i need to find "tougher ones" or experiment with using 2 each side rather than one - they FIT to both the cabin side AND cover fine but "flex" in the hinge itself. 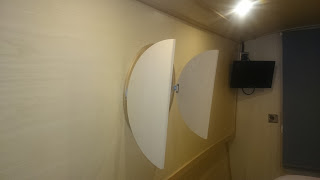 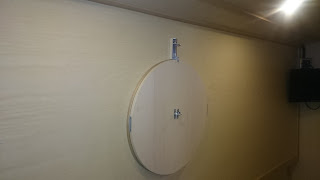 This prototype is in the main bedroom so won't often be opened anyway and once I get another cabinet closer, I'll put the reverse on the side of the cabin to hold them open when required.  I have to admit it was a bit of a cockup   mistake fitting it though as  when closed it serves no purpose as without the angled barrel bolt at the top, they open up anyway...  In future models, I've decided rather than fitting a spacer behind the bolt, I'll drill a little hole into the perimeter of the shutter to keep them closed.

ALSO - I've found a box of mini magnets which I will sink into the mdf BEHIND the laminate before screwing a small washer to the cabin side to keep them open... ALL in good time.

Another little job that's been done this weekend was fitting a mains power point to the end of the kitchen bulkhead - the wiring had been missed off the plan so I took a spur off the washer one under the counter - it means the Tassimo can sit on that side and plug in over the end when required. 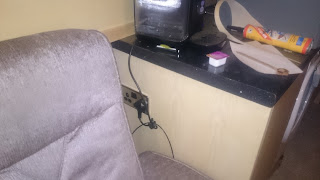 On the opposite side, it seemed a good idea to fit another usb (12 to 5v) socket and volt meter... so I can keep one eye on the batteries whilst watching TV - YES I know there is already one behind my chair but the older I get, the less I like straining my neck! 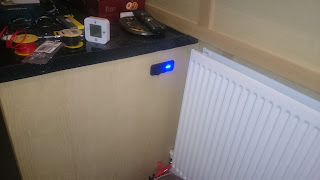 I'm in trouble though - cutting holes in using my multi-tool created a lot of dust...  well, it was a) raining outside and b) I could hardly take the bulkheads out anyway could I?

The final achievement of the weekend, was the installation of a kitchen bin under the sink - Andy found this one somewhere on the interweb and it's quite a reasonable size - with 2 containers... 1 of which will be used for recycling stuff and the other for stuff we can't chuck on the fire... (once we get around to fitting the blooming thing) 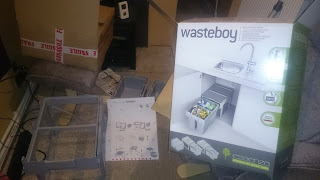 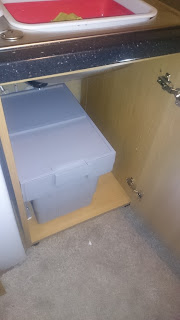 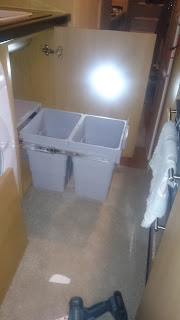 The little lights I've stuck to the cupboard doors are only ikea movement sensitive leds but they do the job of putting light just where you need it.

We can't go to the boat tomorrow but hopefully during the week I'll get the nerve up to begin building the hearth/fire-surround...  The webasto works very well but it really does hammer the batteries - despite purporting not to.

WORK however is rather hectic as we're now trying to get this ride completed by the end of the month - it's meaning working weekends and longer days (unpaid) and I'm afraid that leaves me too exhausted to do much during the week...  I was asked to do a blog posting on the fairground restoration side of life - at some point I'll  post a photo stream of this rides progress but for now, here's how it's looking: 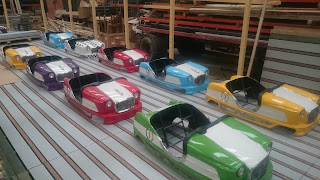 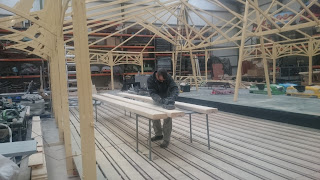 "not very good at remembering faces " there's a name for that nowadays, Prosopagnosia. There's someone famous with it, but of course I can't recall who! I have Forgetagnosia.
Fairground: in our yard we have lots of unfinished fibreglass pedalboats. I suspect they will never be finished as our workforce of 2 are both pensioners now. Good to see your work- I'm very impressed. Heather