I've said all along that I don't like gas... it's dangerous and volatile stuff - hence my reluctance to do the connections myself!

SO on Saturday morning, a "proper man" came along and connected everything up. 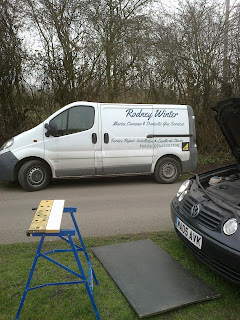 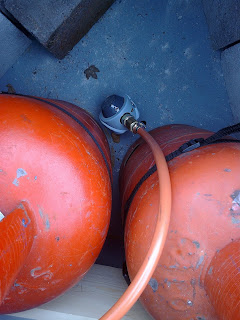 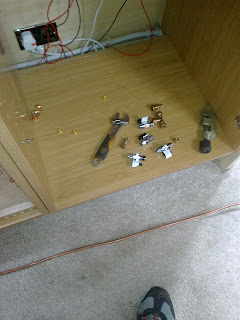 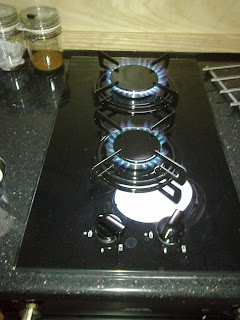 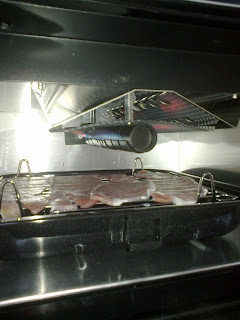 As originally planned, we had a bubble tester in the gas locker - I'm glad we did because when I tested it last night... it bubbled!😠. 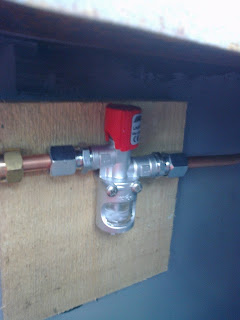 Having HAD the gas on for 24 hours and cooking a rather good (even if I do say so myself) Sunday lunch  -  I was a bit worried the bilges would now be full of gas.    With that in mind, I obviously turned it off at the bottle and removed the floor sections that we'd taken up last weekend to remove ballast - with the door and windows open and the floor up, I'm reasonably confident that gas will have blown away... at least I hope so.

This morning, I sent the chap a text message to say we had a leak and what I'd done to trouble shoot it's location (turning off  the individual isolation taps).  I asked if he'd like me to nip up everything "up stream" of them or would he prefer to call back sometime to take a look - Given I've not booked the BSS man yet, there wasn't really any panic.  He replied immediately saying NOT to touch it and he'd call over as soon as he could.

You could have knocked me down with a feather when he phoned about half 3 to see if he could come over...and to his credit he arrived about 5 and quickly found the tiniest leak - apparently so small it wouldn't have shown on the drop tester thingy (or whatever it's called - I think it's a manometer?)...  it would certainly have been within the acceptable tolerance in a house.  He, (like me) however agreed NO leak is acceptable on a boat.

Anyway - he quickly traced it to the little "t" junction from the main pipe to the appliances and it's now sorted.   I'm very pleased about that.

AS for cooking in a Thetford Prima Midi oven - THAT will take a bit of getting used to.  To start with it only comes with 1 shelf (I have now ordered another one)... the bottom of it is basically cold - I know this because on Saturday night we tried a quick oven pizza and chips and after 40 mins on the bottom, the chips were only just defrosted!

When it came to the chicken on Sunday - it'd been in for nearly an hour before taking it's cardigan off!

Patience was key though and in the end, it all turned out ok - INCLUDING Yorkshire puddings... NOT bad for the first effort in a rubbish oven. 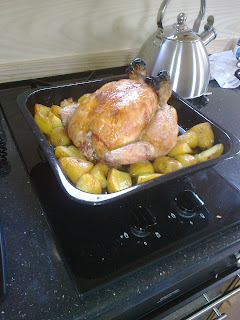 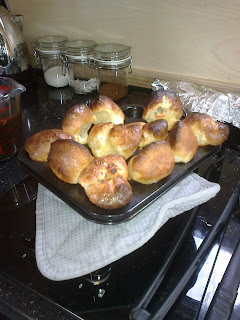 In other news, my trip to the hospital on Friday went ok - the facet joint injections (6 in all) were bearable but as yet not much has happened...  I can go back in a few months for some more apparently - yippee.

Meanwhile, I take as much gabapentin and oxycodone as I feel I need to... hmmf,

Your turn to cook Sunday lunch for all your devoted blog readers soon then :-) things seem to be coming together well. Well done, Caroline

Handy hint on Sunday roasts especially chicken in a 'zoned' oven, cook it for 20 mins upside down before cooking for the usual time. That gets the bottom of the legs going. Your Yorkshires look cracking,can't wait to try out the oven on Oleanna. Pip NB Lillyanne

Blimey.. good job you got the bubble tester! Do you think 2 hobs will be enough for when you have 'guests'? Though the novelty of backup cooking on the stove might be of interest to them

dont forget though how clumsy I am... the 3 second rule takes on a whole new meaning when I'm cooking ;-)

"zoned" is a kind alternative to "crappy" :-) - Thanks for the tip on upside down chickens... it must work as Joan (a woman on a boat about 200 yards away) suggested the same thing when we were chatting the other evening.

I tend to only use 1 pan at a time when cooking anyway - ie, the veg each gets it's own "turn" before being blanched in cold water before a final "blast" in the microwave before serving... that comes from working in a pub kitchen a long time ago and it works very well! - assuming the batteries are charged enough for the microwave :-)

Fab looking yorkshires! We have a 3 stack steamer on the boat - means we can cook all the veges using one pot with water and the slowest vege on the bottom and add layers depending on required cooking time. Saves gas, saves time (and we don't have a microwave so cannot do as you do).
Good news about the gasman being so responsive!
Cheers, Marilyn (nb Waka Huia but still in NZ at the moment)