It's a rare day when I'm not at work by this time (currently 7am)... I've had a lay in and will be off to hospital for the injections into my back later.  I've no idea what that will entail but I'm a brave ginger soldier so whatever they do... HAS to be nicer than a morning at work!

THIS week - despite work being a total pig, I've done a couple of jobs on the boat on an evening... yesterday was a new low work wise though as we had a "Quest TV" film crew in doing a bit about rescuing scrap items for a new series.  Luckily for me, I'm working on the wiring on the cars from the last ride... faffing around with pick-ups and diodes so managed to avoid being interviewed - they were more interested in the current caterpillar project.  It did mean a pretty frustrating day not having the radio on or being able to hammer/drill/saw/grind - or even whistle!  I think it was the first time in many, many years I've had to endure a whole day with nothing to distract me from the voices in my head ;-)

Anyway, back on the boat, having already tried with a supposedly "decent" bilge alarm (which didn't work) I bought a couple of budget models that run on 9v batteries (think smoke alarms) to trial in the cabin (dry bilge) and engine (also dry unless something goes a bit wrong)

Having already taken the floor up at the cabin's lowest point, I figured that was the best place to fit the sensor as should any pipe or pump spring a leak, it will accumulate there quite quickly.... without an alarm, the first we'd know about it would be when it came up through the floor. 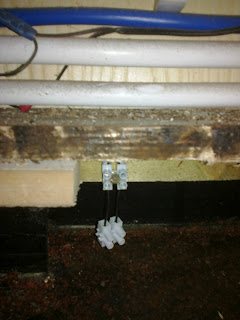 They come with a metre or so of wire which I extended using speaker wire - it said "any" wire would do so as I've not yet fitted the 2nd car stereo, I stole purloined a bit from the speaker box.  Using a couple of choc blocks to secure it to the bearer and another to stop the wires being able to touch and trigger false alarms when the boat is moving.

I printed a little label, and stuck it under the battery holder with the date the battery went in. 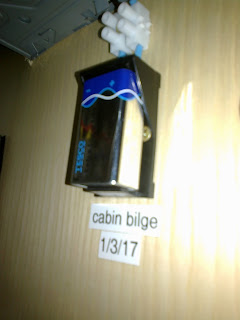 I'm going to do the same with the engine bilge but as I need more wire for the sensor, that will have to wait. 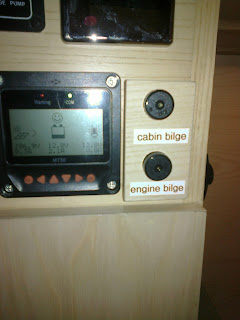 As you can hear - it works with a drop of water.

At some point, I might fit a little led against each alarm so as to easily identify which one (hopefully neither) ever goes off...  but given the engine bilge is easily accessible, it might be simpler just to open the flap and look rather than faff around more.

ONCE I've fitted the engine one, I'll ensure I test it each week when doing the smoke and carbon monoxide alarms to ensure the battery hasn't failed on us.

I've also prettified (for want of a better word) the lounge porthole shutters this week.  Having "cut" my own mdf circles last time for the shutters, I discovered pre-cut ones on ebay for about a tenner for 5.

I've cut them in half, and painted them with cuprinol before glueing them to the shutters.  I think they improve the appearance... and can easily be repainted when we fancy a change of colour. 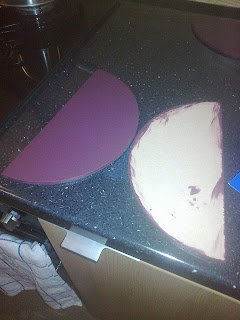 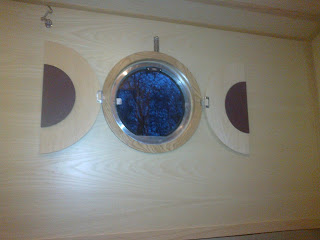 I STILL need to find some sturdier hinges but can't rely on mail order for that as I need to feel them...

Right, I need to go fill in the medical questionnaire to take with me today.  When I finish at the hospital, I presume I'll need to rest a while and hopefully I'll be ok to work on Monday - I'm NOT going in tomorrow despite pressure from the boss...  if he can waste us a days work with a film crew, I can take time to recover!

THAT said, all being well, the gas man  is coming tomorrow so we may have an inaugural Sunday roast on the boat.

That bilge alarm is a good idea. Might have to fit a couple of those.