Sorry I've been away for a while - at the moment there just aren't enough hours in the day... or rather there are, (is?) but when I'm not working I'm pretty much sleeping ... at least that's how it feels.

Last week when I called in on route home from work each evening, my jobs list sort of got ignored and instead of making steady progress, I drank lots of tea and chatted with old Mick.  After his initial shock of us shifting up the cut a few yards and then finding out we weren't exactly a "nuclear family", he's really mellowed and now we have a laugh with each other taking the  mickey  with light-hearted teasing...

We do have things in common though as early last week, we both decided to investigate 12v immersion heaters to use up the dump load from the solar charger once the batteries were full - given both our boats are usually showing 100% on the smart-gauge by lunchtime, it seems SUCH a waste.

I'll short cut to the conclusion - it's too much of a faff!  The work-a-round is to leave the inverter on power-save mode and set a timer to turn the 1kw 230v water heater on around noon for an hour - the theory being that whilst it WILL hammer the batteries, it should give the panels time to replenish a lot of the used power before the sun goes down...  we'll see.  I'm dragging my heals a little as he can afford a new set of batteries better than we can 😉

As well as drinking lots of tea, I DID manage to fit the screwfix water filter (for drinking water)...  Rather then spending 250+ on the microbicidal seagull one as planned,  we bought a 60 quid one that improves that taste rather than killing germs... working on the principle that as it's a new stainless steel water tank, all we need to do is chuck in a few chlorine tablets every few weeks to keep it  germ free and let the filter take away any unpleasant taste ... I really hope we don't end up having to fit the expensive one.

Anyway - it was a simple to fit affair.  Drill a hole in the sink top and then screw on the "self piercing" bracket thingy around the water pipe that CLAIMED to be suitable for plastic pipes...  hmmm. The instructions claimed I needed to screw it in fully and leave it there!

Doing it that way resulted in NO flow whatsoever - applying ginger logic, I decided to undo it and then drill a little hole where the pierced needle thing was and rely on the rubber washer to make a good seal against the pipe. 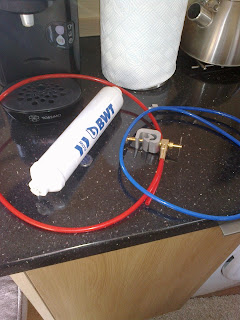 The problem actually was that the water pump is only 1.7bar (I think ) and the minimum operating pressure is claimed to be 2bar...  I should have read that before buying it.  No matter the little hole and re-assembly did the trick. 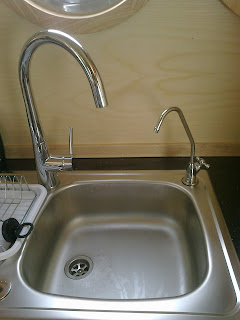 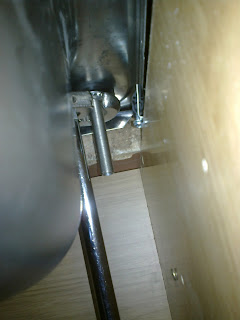 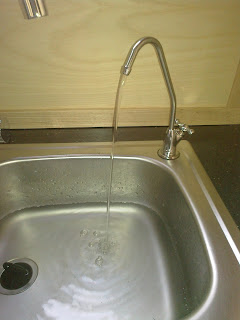 It's not the fastest flow I'll grant you but it's enough for a glass of water or dilute orange.

I can't remember if I mentioned, but now that the gas is working, we needed to get a heatproof shield to go behind the little hob - I'd got a quote for black heatproof glass but by the time we'd have the other side done and also a couple of little circles to finish off the top of the fire flue, the quote had risen to nearly 500 quid... suffice to say we agreed to make a stainless steel one.

A really helpful chap called me and we agreed 100 quid cash for these in brushed steel... I called in and paid him last week - as yet no sign of the stuff... hmmm. I'll chase him up tomorrow!

Is your water "town" water? Do you usually filter it in the house? In Australia, we would drink town water without filtering, but some people do. Would only filter it for taste if it is bad, but then you can get used to anything. Being on a boat, from experience, the piping that the water goes through must be for drinking water, otherwise there is a taste. Always use your own dedicated hose for putting water into the tank and don't be tempted to use the one already attached to the tap if there is one.

Yes it's technically perfectly drinkable but being stored in the tank, I expect the chlorine put in by the water company will become less effective the longer it's in there - hence the plan to chuck in tablets once in a while and use the filter to remove the "fresh chlorine" taste of them... to be honest though, since October, we've been drinking it straight from the tap (in small amounts I admit) and no sign of any sickness anyway. AS for hoses - whilst we should be using a potable grade one, we're using an x hose that lives in a bucket in the gas locker. *note to self - give that a flush with bleach too*...