Boxing in pipes and visitors...

Well not the boxing in of visitors but you know what I mean.

After our near poseidon panic, Saturday improved rapidly and once we'd calmed down, I did a bit more boxing in - pending the arrival of Andy's parents to see the boat  visit us.

I had originally planned not to have any screws showing but have since decided at some point, I'll have to remove it to get at the plumbing or to run some cables so have done an 'honest' job of it, instead. 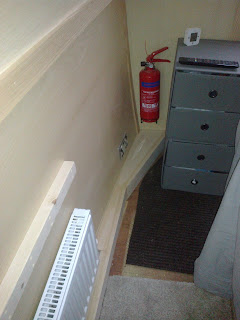 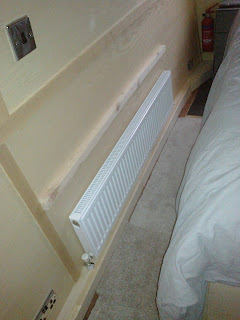 Another quick job I finally got around to was attaching an outdoor waterproof speaker to the rear radio - up until now when outside or cruising I've had to rely on either having the radio blaring INSIDE or chomping away through AA batteries on the portable... with the additional risk of knocking aforementioned into the canal at some point.

I've used a telephone curly cable so it can be placed on the bank side for a balmy summer day in the middle of nowhere...  (I can dream)... 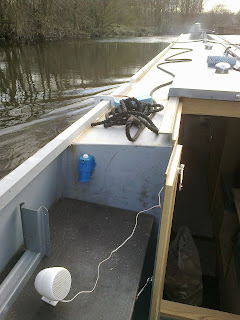 When his parents arrived, we went off for a chug - the river was up after the night's rain so we had no choice but to go the other way - it's a bit of a boring route but it was nice to have a few glasses of wine and give them a go on the tiller.

Andy is still not drinking so once I'd had a couple, he took over skippering and I pressed the buttons on the lock -  here's a couple of snaps of him and his mum "treading water" in the lock whilst waiting for it to fill. 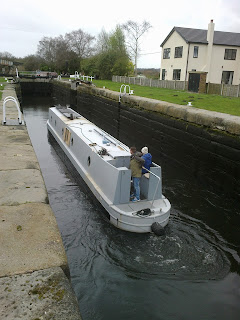 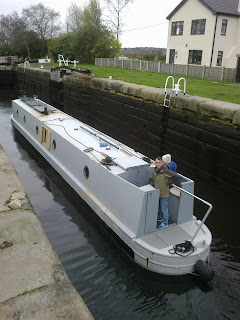 We're really hoping for a warm and dry weekend so we can get some rust rubbed down and slap some primer on - we're both sick of the rusty bits now....  NOT helped by me drilling/cutting holes in the roof and leaving forgetting how quickly the swarf would oxidise!

btw- before I forget, we've had another "big" visitor across from us lately - The Freda Carless http://www.nationalhistoricships.org.uk/register/2790/freda-carless 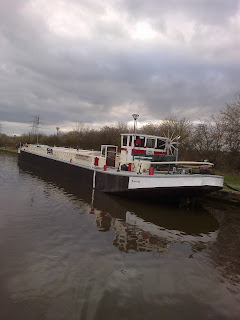 She was enormous but made a lovely chugging sound when departing.

Tomorrow night we've got "Rocky Horror" booked at the Theatre... alas we BOTH miss-read - it's actually a screening of the film 'sing-a-long style... it's going to be grim!!!