Back to Base, Teenagers and 'blood -boiling' lockies...

You'll remember that i don't LIKE to moan ?  -  hmmmm... well, I challenge Anyone who encounters the younger lockie on Newley locks NOT to let him under their skin.

KNOWING we had to arrive in at the top of Newley Locks by 10am for the 2 hour down window, we left Apperley bridge bright and early and teamed up with another boat to share swing bridges etc.  Upon arrival (9.30) the OLD (sorry about the use of that word but its easier to differentiate between the GOOD one and the hostile/passive-aggressive.opinionated,know-it-all cretin younger one) proper lockie, came up and said he'd get us down asap.  There was a young chap behind us in his little grp sailing thingy that our travelling companions had given a tow to the locks - poor young lad had rather naively moored his boat between the two flights and gone off to a scout camp... only to come back to find (or not I suppose) his outboard motor and leisure batteries gone.  The police had just been to see him and had the other boat not given him a tow, we'd have done so 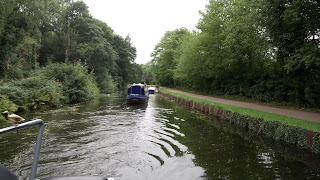 he was told that he'd have to wait until the end of the locking down period for another boat to turn up rather than wasting water letting him down on his own... he was relaxed about this though and he got a book out and began reading.

Once we began our decent, the nice lockie went on ahead to prep the next locks whilst the younger one stayed to help out.  Well I say help, he's clearly wasted on the canal network - what with his higher intelligence and superb interpersonal (not) skills, he should be working either as a brain surgeon or international mediator.!   I  HOPE you're picking up the sarcasm here -  Trouble was, that it was Andy's day to play skipper and my turn on the towpath...  now, having been trapped at the top of Bingley for 24 hours cause "rules is rules" - when faced with THIS chap, it was always going to be confrontational journey.  Now OK, I might have commented on how frustrating it's been this summer what with all the emergency stoppages just about everywhere we've tried to travel...however, his reply should have been at worst, slightly apologetic, perhaps even agreeing... instead, Mr.  hostile/passive-aggressive.opinionated,know-it-all cretin younger lockie, decided to launch into a rant at me about how boaters waste water!!! Unfortunately, having got a phone FULL of photos of broken paddles, leaking gates and badly maintained lock gates, I was not overly enamored at being blamed for wasting water by USING our boat for navigational purposes, whilst paying nearly twice a leisure license AND having to jump through extra hoops for the privilege.

When faced with idiots like him confrontational folks, my preferred course of action is to walk away before I say anything TOO offence.  I tried this but he then adopted a new approach to wind me up by talking loudly at the chap on the boat to try and get his message across to me through a 3rd party.

By the time we'd gotten to the bottom of the flights I was boiling angry and Andy very graciously agreed to swap roles for the remainder of the day to prevent further abrasion.

Luckily, the couple on the other boat were really good natured - and we enjoyed the rest of our journey in the Granary Wharf... that was until they got a bit of metal and rope jammed in their prop near the pontoons and then became grounded because the water levels were low.  Ginger to the rescue and after about an hours buggering around, we managed to free them and get the boat floating again... a short while later, the lady (I didn't get her name but she was brilliantly funny) knocked on the boat roof with a little bottle of gin as a thank you - not required but appreciated non the less. 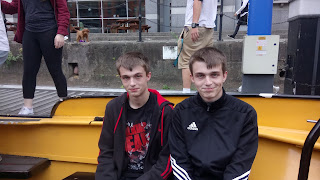 You can see the excitement was nearly too much for them!

Whilst the kids have been with us, we've been teaching them basic life skills... such as washing up, tidying up their own clothes and making their beds daily - it's been quite a challenge.  Another thing we had to address was shower length.  Now I DO remember being a teenager - having just discovered my own 'home-entertainment section' and the resultant time it used to take for me to have a shower - OBVIOUSLY the supply of hot water on the boat does not really facilitate this kind of  behavior - ergo, we had to have an awkward chat about shower duration.

I tried to do it tactfully, but apparently (and I take issue with this) I'm NOT the most tactful of people!  Anyway - I think I got the message across and touch wood, we never ran out of water.

UNLIKE Coke!  We couldn't believe HOW much coke *other carbonated soft drinks are available* they get through each day - at least 2*2 litre bottles - sometimes 3 and whilst we HAD stocked up before their arrival (by getting a couple of bottles each time we went out in Skipton) we soon ran out.  This led to another "life lesson" -  we went shopping and bought a couple of days worth and made THEM carry it back to the boat whilst we frittered our shopping bags on less important stuff such as fruit and veg etc.  There was a bit of moaning about having to carry it SO far back to the boat but oddly enough, they soon switched to diluted orange juice... for fear of having to repeat their mule impression.

We got back to base on Friday morning and I nipped home to pick up stove spares I'd ordred the other month - namely a new rear liner and replacement glass door.  The liner had cracked and whilst I know it was safe to use, wanted a new one.  Same for the door - whlst not cracked yet, it WAS scratched quite badly by some ginger idiot who took a stainless steel scouring thing to it last year over enthusiastic cleaning. 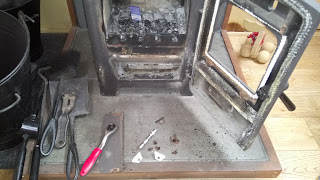 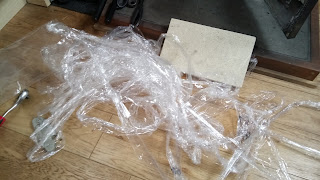 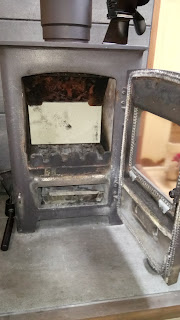 Once fitted, I gave the whole thing a bit of tlc and even swept the chimney too.  Roll on winter as we're ready for you now.

BEFORE then however, we've a few short trips to fit in - the first being a birthday chug. 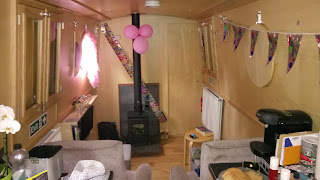 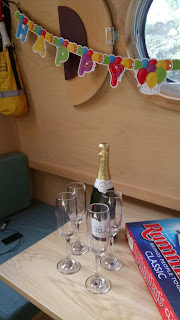 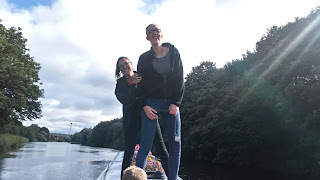 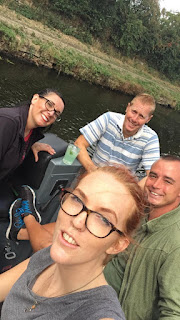 and Hebble to Mirfield... we HAD planned on it being a Leeds weekend but thanks to Lock 1 now being closed until further notice, we had to knock that idea on the head.  No matter, our guests had fun and even got to tolerate enjoy Rummikub.

When we got back to base last night, everyone was in an exuberant mood - (yes even me) AND Brynn  was more than happy to join in too! 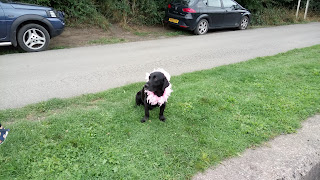 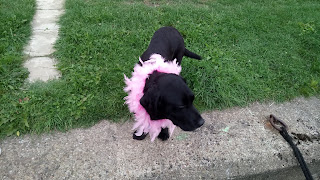 He carried it off well don't you think?

Today - we're heading into Dry dock for a week to have the bottom blacked... whilst we're out of the water, we're going to do chores - including cutting down the solar panel brackets so we'll fit through Standedge tunnel OK... it's not like I can ever be bothered to tilt them anyway so I'm going to make them static.