More Closures but we're on our way back to Wakefield ....

I try very hard NOT to be a moaner and ranter... VERY hard  - ok so I don't always succeed but since living on a boat, my mindset is generally quite upbeat and positive... as a result of the people we meet on a daily basis... be them boaters or dog walkers - Cyclists and fishermen are excluded from this "positive group" - ESPECIALLY those who think ringing their bell (the cyclists not the fishermen) gives them right of way!

Anyway - We've been holed up in Skipton for about a week - basically awaiting the arrival of Andy's Nephews who have come to stay for  a holiday with us.  We HAD planned for them to catch the last leg of the return from Manchester on the Rochdale but those of you paying attention will remember they closed that on us due to miss-management/gates leaking lack of dredging the water shortage.

As it happens, we've enjoyed being in Skipton - it's a lovely place to be stuck... plenty to do and see and even a few rain showers .... one day even being cold enough for me to light the fire again! 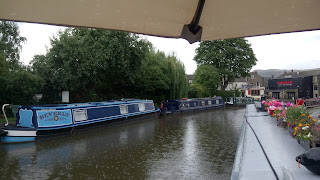 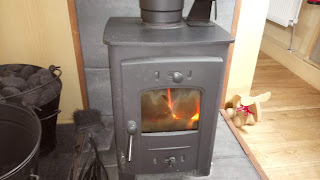 We've had fliers on the side of the boat for people to collect (not that we can really DO much in the way of short trips for the foreseeable ) but at least it might get some more interest in Next years trips - writing of which, we've now got 4 "new" bookings in the diary for 2019 and 2/3 that we've moved from this Autumns thwarted trip to Wolverhampton.

On Saturday, Andy's sister and husband turned up (fresh from a week in Wales with her parents) and once we'd had lunch, they went home and we began one of those treasure hunts/quizes around the town with the kids.  BEING old school, we printed them out and followed clues.  NOT very well I might add as a combination of the town being heaving AND our teenage orienteering  missing out vital bits of information when reading the clues out - ergo it too a long time and we went around in circles a bit of it.  Still, it was a good way of having a structured wander around the area and into places we might otherwise not have visited.  If you look closely this dog on the Springs branch is having a lay in the stream... quite happy to cool off from the heat. 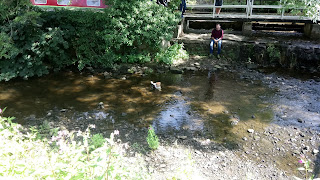 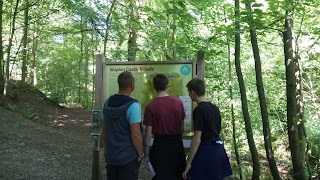 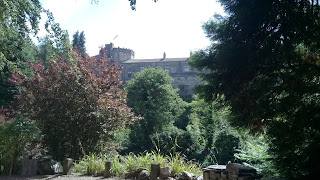 We would've have liked to spend another couple of days in the town with the kids but on checking my CRT emails, I spotted that they are planning now to close another section of the canal - from the top of Bingley 5 rise right to Lock 1 where Granary Wharf meets the river Aire in the centre of Leeds.

I also spotted that BEFORE this is due to happen (on Friday 17th) the hours of operation of Bingley had been reduced to 10-12 down and 1-3 up...

With this in mind, we left Skipton on Saturday night and traveled as far as Silsden before the rain wore us down - ironic that we're having to make a dash to get off the canal before it closes when it's raining cats and dogs!

Hey ho.  After a reasonable night in Silsden, we departed about 7.30 with a view to arriving at Biingley for the allotted opening hours.

HOWEVER, what the website DIDN'T say was that "someone at CRT" had decreed only 4 lockings down and 3 lockings up per day - ergo, when we got there ON TIME we were already TOO late as yesterdays arrivals had filled the slots in the queue ahead of us.  I got a bit of a sulk on and Tweeted CRT that perhaps they ought to put the FULL story on the website - especially as hirers were turning up losing a whole day of their already expensive holiday going no where.

Anyway - as mooring space was at a premium for the waiting boats, we invited a Pennine cruiser to breast up against us for the night - knowing at least we'd be first in the queue.  I won't lie - I was NOT good humored about having to kill 24 hours and STILL use just as much water to acheive our transit goal - there being no valid reason in my mind, why CRT couldnt' have run water down from the CLOSED pounds above Gargrave - I mean what use is it having water up there when there are no boats? - they might just as well empty the buggers and give the boats down stream a chance of moving and mooring. 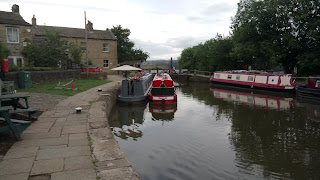 So - this morning (Monday 13th) we finally descended the 5 and 3 with the hire boat in the photo.  We've ended up doing more than we'd normally do in a bid to get off the L & L asap - especially given that when we arrived at Dobson's lock we had an hour delay whilst more of that expanding foam grouting was being done - we already knew about that though and it gave us chance to do a couple of loads of washing, all have showers and leave with a full tank.

Tomorrow, we have to get up before god bright and early to get to Newlay locks which are now ALSO on restrictions... 10-12 down and 1-3 up... there better not be a queue there or my twitter finger will go onto overdrive.

With this as your debut year, things can only get better ;)
Rog and Jane
nb Paneke

sadly you are experiencing what we all felt was happening with CRT the lack of maintenance and care for boat users, hence why so many of have left the canals. Lack of correct information and closures all around the system these days due to Breaches and lack of maintenence are just the start, Its so sad to see whats happening on our wonderful waterways system!

Love reading your blog. You are so entertaining lol. Hope you get home safely. Look forward to seeing you in Wakefield.
Sue, Boheme xx