Engine Bay painted... back on wet water and a final Wine-Wednesday...

So - On Friday morning, the bloke who owns/runs the boatyard came up to me and said "we'll get you back in the water this afternoon so you're not trapped for the bank holiday weekend" - to which I explained I planned on painting the engine bay out on Saturday whilst it's out of the water... assuming a week's dry dock would be just that - ie, 7 days.  It turned out HIS week (even though they work weekends) is Monday to Friday...  which didn't sit well if I'm honest - it's one thing paying a lot more for THEM to black it than us DIYing it, but by only being out for 48 hours after it's been blacked didn't seem long for it to cure.  He then went on to say we COULD stay in another couple of days if we wished but it'd be an extra 50 quid a day....  it was already VERY expensive so I declined - stating that given it was already costing  us about 80 quid an hour for "actual work done"  so we'd come out when he wanted.   In the end, it turned into Sunday morning about 11 (in the pouring rain) for no extra cost.

I'd ran out of excuses time, so if I were to get 2 coats of white paint on the engine bay, I'd have to pull my finger out and get on with it.

It's not until I'd taken everything out of there, I realized HOW much stuff gets stored - at least we could just leave it on the roof of the boat rather than have to put it somewhere else ... given the dry dock is in a locked compound. 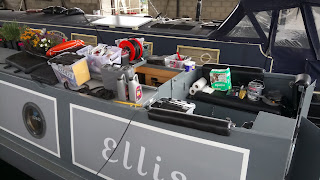 I had planned on using white Hammerite smooth but when I called into screw fix to get a big tin, they only had BLACK in the size required ... instead, I got Johnsons Trade stuff which as far as I can tell is the same anyway... and a few quid cheaper.

Once the space was cleared out, it was clear to see how much surface rust had appeared - so armed with a wire brush, hoover and tin of rust-killer I dislocated every joint in my body climbed in and got to work.  I'm currently at least 2 stone too fat to be in such places and even though Andy is a good 2 stone lighter than I, he refused on the grounds of it being a 'dark blue' job.  Ergo, MUGGINS had to do it.... 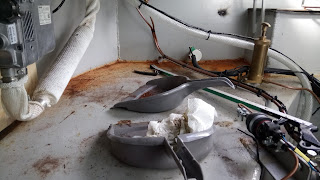 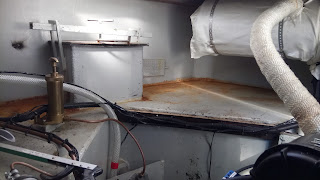 I left the rust killer to do it's thing (if in fact it does anything at all other than turn black) and then before bed, began the first coat.

Of course me being a stupid ginger  being me, I'd ended up painting bits I'd later need to stand on to reach other bits... to say it is a pants job is an understatement. In hindsight, I'd have been better off paying THEM to paint the engine hole and doing the blacking myself.  Hey ho.  I know now! 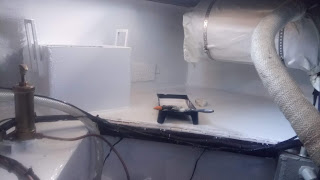 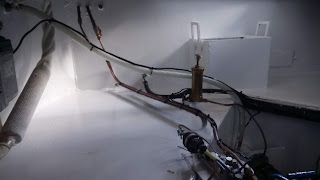 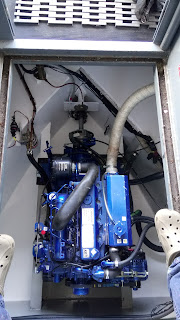 Whilst I was doing it, rather than BLACKING down the weedhatch, I decided to "WHITE" it instead - the logic being anything that helps reflect some light down to the prop will be helpful when it comes to de-fouling it next time... time will tell whether that was a good idea or not.

Once that was done, I turned my attention to the fenders front and rear...  re-fitting them, I painted the chains with black Hammerite and although we HAD planned on buying a new tipcat for the front to replace the 'squished' button, I had a money- saving  brainwave and turned it the other way around... it looks a bit odd but once it's been up against a couple of lock gates, it will normalize I'm sure... and more importantly, it'll defer the cost to the next financial year. 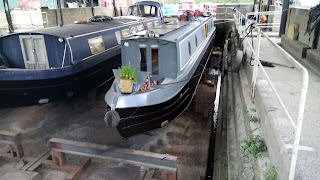 On Saturday morning, I applied the second coat to the engine bay and then dug out (by accident I admit - having spotted it in a plastic box on the roof) a new LED front light to replace the halogen one.  Once I'd started fitting it, I remembered WHY I'd not already done it... it was a bit of a pain as securing it to the solar panel bracket (still NOT cut down ahem) meant it required some kind of spacing washer set up to enable it to tilt both up and down.

After much rutting around a box of "useful things that Andy' simply can't get his head around" I cobbled together some plastic spacers  - no idea WHERE I'd gotten them from but I have to admit to feeling smug that I'd had the hoarding instinct fore-sight to think they might come in useful ONE DAY.

Sunday morning arrived and despite being ready about 7.30 am to go back in, it wasn't until about 11 the chap came and began filling the dock.  The power and vibrations felt through the boat as the water rushed in was a bit un nerving...  I had visions as the level rose of the supports falling over and the boat crashing down. 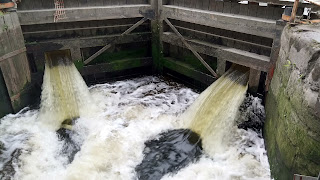 The rain was pouring down and again I drew the short straw - Andy taking the car to the first lock and me chugging in the miserable rain.

It's good to be bobbing about again - AND good to be able to have the fire on.

Now we're back on the home mooring for a few days, we're doing jobs and have signed up for a 3 month gym membership - given our trip to Wolverhampton has been thwarted, we may as well get some of the blubber off in preparation for next year.

We've had a couple of visits and will be t-total for a while, whilst (bad English sorry) we get fit - However, last night was our final Wine-Wednesday with Sallie... she's got a new job up in North Yorkshire so she and Lee (the husband) are moving.  He couldn't make it  but Sheree deputized well.... although I'm sure Lee wouldn't  have been sexually harassing the new barman in the same way as Sheree was! - although you never know these days... ;-) 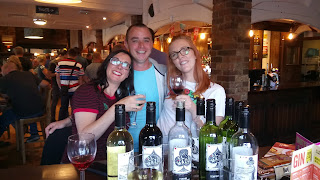 I took this photo relatively early on... ahem...  we have no idea how much we got through but it WAS, ONE last blast.  On the plus side, it WAS quite early when we left (I got an Uber receipt through on my phone for the girls' taxi home) at 21.02... I DO like Uber... it's good to know you can put someone in a taxi and KNOW they've gotten home ok.

It was quite an emotional end to the evening - We shall miss meeting up with our pals but KNOW the move will be a good one for them and we'll try and catch up with them as often as our joint schedules allow.  Sallie is one of those people who puts her heart and soul into whatever she does - the new place she's going to is very lucky to have her... her old place is going to have one hell of a hole to fill - I believe it's called Karma !

Speaking (writing) of new jobs, Sallie isn't the only one moving on to pastures new - Sheree is also moving on.  She is at least staying in the same town so hopefully we'll be able to catch up with her too.

Meanwhile - THIS morning, we're on the visitor moorings (having taken the boat to the pub last night) and when the mist clears (in our heads not outside) we'll fill up with water, turn and head back to the mooring in time for an early afternoon gym session ... well I say GYM session - today it might just consist of a gentle swim, splodge in the spas and chat with some other members - who knows, perhaps we'll take a few fliers with us.

Lovely to catch up with you both. the engine bay looks spiffing! Mine is very clean, having had it painted in 2016 and I keep it that way. I've had five engineers down the engine hole over the last 18 months for various things and all of them have commented on how nice and clean it was. It is well worth the time and effort, so good on you.

Thanks for changing the comments page so I can finally leave a comment!! Take care of each other and keep posting.

Good job painting the engine bay, and painting it white. We have had boats for many years, and DH always has the bilge area painted white. You can see any engine oil leaks and other leaks, which is his main reason, and also keep it clean easily. Much better for working on the engine. We have always had great complementary comments on the engine room when selling the boats.

Hey Jaq - lovely to hear from you. I found a tick in a box somewhere and that seems to have done it ... although I now can't reply individually... small price I suppose lol.

I've still got a couple of areas to paint underneath the pulleys at the back but I'll do them when I change the oil next time.