I love this time of year... it's still warm during the day but evenings and mornings have that distinctly autumnal nip in the air.  THIS means of course, we can have the fire ticking over of an evening (leaving it to burn out ) and set the webasto to come on about 6 am to take the chill off getting out of bed.

We've been back on the home mooring for a few days doing chores here and there AND going to the gym daily.  Given we're unable to undertake our planned Autumn cruise to Wolverhampton, we've taken a 3 month membership at the local Nuffield Heatlh  Gym - we could have go to a cheaper one but Andy was insistent on having a pool... a pool that as of 6 visits so far, he's NOT been in!!!

No matter.  We're forcing ourselves to do an hours plodding away in the cardio suite each day before a relaxing splodge in the spas... THUS far I've only shifted 4 lbs of blubber but it's going in the right direction.  Once we get back in the habit, we'll increase our times and get on with the job in hand.  As miserable as it is, at least we can use THEIR showers each day and save both engine hours (heating the water) or diesel in the webasto.... not to mention reduce the number of times we have to fill the water tank on the  boat.

Yesterday, rather than driving the car from the mooring to the gym (circa 10-15 mins through town traffic) we took the boat - it takes around an hour and half but we can moor about 100 metres away from it so it's handy enough. 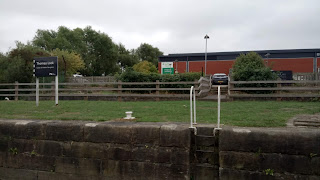 The only thing that took the edge of a nice chug, were 2 idiot fishermen who'd plonked themselves on the river lock landing...  refusing to take the hint the boat's horn made until the last minute... NEXT time, I'll just crash in to their landing nets and trample on whatever I need to to get off with the centre line and tie the boat up. 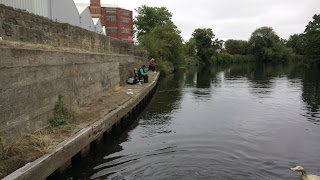 Speaking (well writing) of fishermen - they are NOT in my good books at the moment - well not all fishermen per say - JUST those who abandon masses of fishing line... which in turn gets wrapped around wildlife.

WHY am I ranting about this? - well, on Sunday afternoon, a random cygnet appeared at the back of the boat and we could see one of it's wings was swollen and submerged about 4 inches under water...  combined with that, it's legs were both quivering  - we fed the poor thing and phoned the RSPCA to see what we should do. 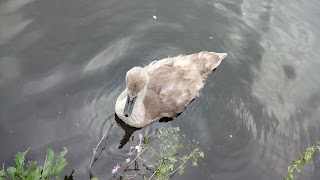 They called me back about an hour later to ask it's whereabouts and inquire if I knew what "Angel Wing" was...  After she described it to me, I confirmed I didn't think it was that...  the lady then said initially she'd come on Tuesday so I could point her in the direction it had gone.  I explained I was still watching it - (the poor thing had paddled about 200 metres up the cut towards the river)  at which point she said in that case, she'd come straight out -  apparently people report things and quite often the birds move on... thus wasting lots of their time.

Anyway - long story short, upon arrival she confirmed we'd need to try and catch the creature.  I jogged back to the boat to get some bread to entice it... which worked to a point but every time she tried to hook it/net it, it managed to evade capture.  It took about half an hours buggering about but with another boating holding the landing net, the RSPCA woman using the neck hook and me grabbing it's neck/head we got it out and carefully secured in a giant piping bag. 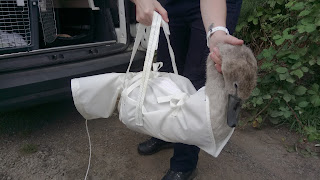 Sadly, an hour or so later she telephoned me to say that once she'd taken it to the vet to have a proper look at, the wing was dead  - fishing line was wrapped round both it and a leg and both were too badly damaged... as such, they put it to sleep.

A sad end to a well intentioned rescue but at least it didn't die a long, slow and painful death.
Ergo, at the moment, FISHERMEN are on not in our good books...and we've half a mind to tie some of them with their line and leave them under a bush somewhere to suffer to see how THEY like it!

In other news,  we've spotted that the section of the Leeds and Liverpool between lock 1 (into Granary Wharf) AND the bottom of Bingley is now open again ... still on restricted operational hours for Newley locks... this bodes well for our final cruise (with guests) of this season, which runs from Leeds to Skipton (and back) in the middle of October... hopefully coinciding with Oktoberfest again.

Before then however we've a couple of shorter "on and off the river" cruises mid and late September which we're looking forward to.  With luck, the weather will play nicely and NOT send the Calder into Flood ... although, given how things have gone this first year for us, we're not holding our breath.

Meanwhile, I'll leave you with a photo I took this morning from our favourite local mooring - (us spending a couple more days away from Stanley Ferry) up near Broad cut. 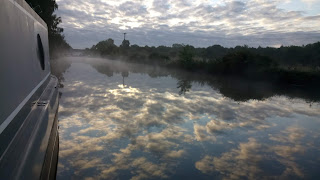