Out and about again.

We've been pottering around our home mooring for too long now so are relieved to have guests with us as I type.  Of course, as you might expect after the longest, hottest, driest and lovely summer we've had, Autumn is here with some horrid storms.

Before we left "home" - a rare sight could be seen mowing the lawn grassy verge...Even better, he was powering the mower by the generator rather than off the invertor on the boat. 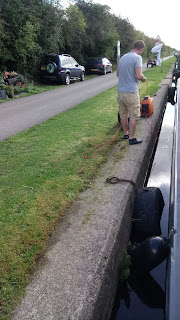 Yesterday, we left the mooring and by the time we'd gone onto the river, the winds were really battering us and what with the waves, it really felt like we were at sea - what with the pitching and  rolling.

On arrival at Fall Ings Lock, as well as the usual assortment of miscreants that loiter there, on this occasion there was a chap - having a wash and doing his laundry in the lock. Andy applied the "head down and pretend he's not there" approach, whilst I engaged in boaty type conversations.  Luckily, thinking quickly enough to say we had guests on board when he asked to have a look around.

We're so lucky to be in reasonable shape mental health wise but it's a very fine line for some people...

Having spent a night on Barnsley Road visitor moorings in  Wakefield, we awaited the arrival of our guests for what seemed like an age -  it'd been quite a while since we had longer term travelling companions and we were both looking forward to playing "hosts" again... as usual, the excitement of meeting new people was twinged with the nervousness that we'd not get along.

When they arrived a little after midday, it only took a matter of seconds to suss them out and feel comfortable we WERE going to get along...  you just know with some people.  They are  our 3rd set (or whatever the collective noun is) of Aussie travelers.   Up for anything and as easy going as you could ask for - WHICH turns out is good given Storm Alan and the remains of Helene were about to clobber us again.

Talk about windy... once on route, we crabbed our way up the river with the rain battering in our faces - well I say OUR,  Neil and Jenny were unpacking and I was loading up the washer (we offered to do a load for them as they've been in the uk a few weeks already) and filling it with hot water manually through the drawer.... I might have taken a long time to do this so as to stay out of the weather....

The rain did ease (if not the wind) and we ended up moored for the night, just before the Dewsbury arm on the Calder and Hebble.  This morning, after a surprisingly quiet night  we're going to head off shortly before the weather deteriorates yet further - it's forecast an Awful afternoon so hopefully we'll get hunkered down somewhere around Mirfield before then.

In other news, even though we're away from the gym for a few days now, PRIOR to departure we've been going once-sometimes twice a day and I'm pleased to report this mornings readings as 13 stone 11 and a bit...  IT's bloody slow over 40 though - I remember when I could just look at a Ryveta and lose some flab. 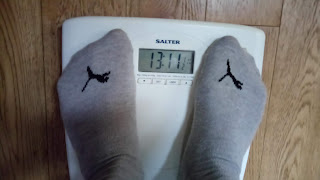 Oh how things have changed... it's a miserable slog now.  Hey ho.

Hope the weather gets better for your trip.