Don't worry - for those dreading catching a glimpse of another of my nipples (that sounds like I have loads) there are NO bathing photos in this post.

So then,  as you'll recall on Wednesday (19th) an Australian couple joined us for a short  trip, going  to Cooper Bridge and back from Wakefield.  Jenny and Neil were 6 weeks into their UK trip and after various whistle-stop tours, had scheduled in a relaxing boating break.

Hmm - typically after weeks of relatively nice, calm weather - all that was about to end abruptly.

The first day of our trip took us from the visitor moorings in Wakefield, up the river Calder and on through broad cut  towards the Dewsbury arm.

I shan't lie - for the first hour or so the wind and rain was awful - at times we were even crabbing our way up stream on the river...  Oddly enough though, by the time we stopped for the night, it was earilery calm.

The following morning, once again we seemed to be stuck in our little bubble of lovely autumn weather... 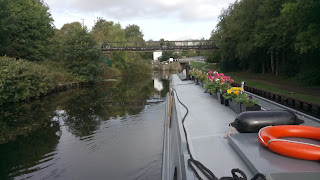 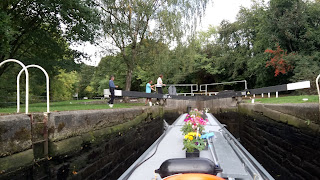 Jenny and Neil had very quickly become comfortable crew members and our journey, whilst a little chilly was really lovely - at least for a while.  By about noon the sky had darkened and the wind and rain had returned..

As is the norm under such conditions, I tend to end up skippering on the back of the boat alone whilst the lazy buggers below crew stay out of sight and play board games/drink gin.  To be honest, I don't REALLY mind.... although I do like to pretend not to ;-)  By about 1.30, we'd reached the flood lock at Cooper Bridge and tied up on the visitor moorings for a spot of lunch.
- a simple lunch of pea and gammon soup with bread that I'd produced during some impressive multi-tasking earlier. (IF I have a fault, it's my modesty.) 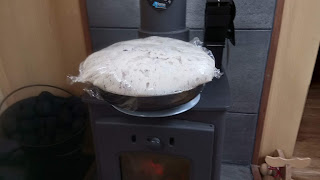 After lunch, with no sign of the rain abating, we headed back on to the river... turned and then began to retrace our steps - once again with muggins  the just the Captain on the bridge lol  - Actually that's not totally fair ... Andy was on the towpath with a brolly and heading back to set the lock ready for us to chug straight into.

Our original plan HAD been to moor up in Mirfield on the bollards opposite where the OLD supermarket had been  - the visitor moorings already being full of boats ... boats, that could have tied up a bit closer together to fit a few more in.  On arrival however, we noticed the towpath was closed so if we DID stop there, we'd end up trapped.

Instead, we chugged a little further on and stopped outside Mirfield Boat builders.  The weather was deteriorating yet further so we battened down the hatches (literally), made the fire up and spent the evening playing games and nattering over a drink or two.  Jenny and Neil have been good for us as what with them NOT being very committed drinkers, we too cut back.

It didn't seem TOO bad - well not until about 1.30 am when the wind went up another level and as the flood gates had obviously been closed , the water level dropped a bit - thereby clonking the base-plate on to the bank sides every 20 seconds or so occasionally.  Add to that the worry I'd banged in 2 pins rather than set springs, it did mean for a rather restless night

Of course, I could have had  a wander around in my pants in the dark but given how wet and windy it was, I decided that IF I had to go out it would only be to recover one end of the boat from the other side of the bank and ideally that might not happen anyway.

It didn't - instead however,  I got the emergency navigation closure  email from CRT we'd been dreading which effectively meant we were "stuck" in Mirfield until river levels dropped.

Annoyingly, when we went for a walk the next day, we spotted the NEXT flood gate downstream on the river was open  but although the river was in the amber, the section remained officially closed... not a risk we're prepared to take with guests on board.

Mifrield is nice enough to spend a few hours in but in the wind and rain thoughts soon lead to comfort food.  At the request of our guests, a walk to "Alan's Fish and Chips" was in order where we all ordered chip butties (with fish on the side)... Apparently, they don't have them in Oz. 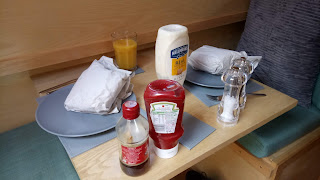 We kept checking the CRT notices in the hope they'd open the navigation again - if it had been done by 3pm, we'd have been able to go a bit faster than normal and get closed enough to Wakefield for an early start the following morning.  That would have meant our visitors could get on the train they'd planned.

It wasn't to be.  Instead, we did a reconnaissance mission to Mirfield station and tried to work out the best plan to get them to Leeds in time for their pre-booked train to Crew the next day.

Talk about insult to injury, WHAT was happening on Saturday 22nd? - RMT strike action affecting LOTS of trains.  After a bit of buggering about on various websites we formulated a couple of plans  - and (factoring some plan c's) all was well.

We said our goodbyes at about 9.30 on Saturday morning and spent the rest of the day mooching around Mirfield awaiting an email from CRT.

By about tea-time, we had a wander to the river and noticed the level was WELL back into the green so we set off downstream.

Once through Shepley Bridge lock and the next flood lock, we came across a trip boat coming up the river who indicated for us to pull close enough to speak.  They warned us that the NEXT river lock was closed and no landing was available.   hmmm - Andy decided to do his Indiana Jones impression and lassoed the bollard from the roof whilst I kept the power on - There IS a lock landing but CRT seem to have decided to abandon it AND to remove the 2nd set of gates that WOULD make the flood LOCK just that... instead, it being turned into a flood GATE that can't be used as a lock if you follow - perhaps the photo below will make it easier to understand. 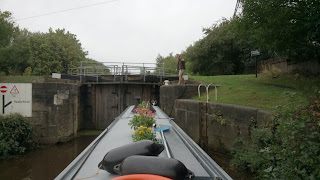 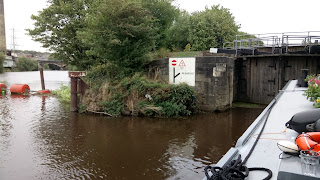 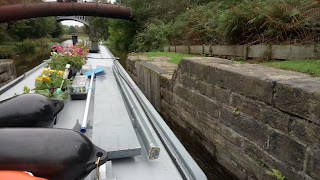 Because the river was now back in green but the pound behind the flood lock  gate was low - DUE to it leaking out of the lock at the OTHER end of the pound. it meant we had to effectively top up about half a mile - maybe a bit more of pound, before we could get through.

WHY they are doing this to former WORKING flood gates is beyond me.  Well actually, I suppose it's CHEAPER and easier for them to do this than maintain something that has worked perfectly well for years... choosing instead a cheaper option perhaps and to "CLOSE" Navigation's until it suits THEM (or until Monday morning as it turned out).

WE continued our way back towards town and encountered  another FORMER flood LOCK that is now a Flood GATE at Thornes.... 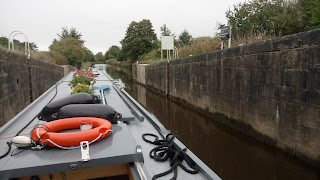 The thing is, the river was back in the green - and had been for about 5 hours at least by the time we got here... We met a few boats who had the same frustration and grumbles as us .  It's perfectly acceptable to close the gates when a risk of flooding approaches but by the same token they need to be on the ball and re-open them ASAP to allow navigation once it's dropped.

By the time we got back to our mooring, our backs were aching and we agreed a "bath treat was in order" - Looking last minute online, I found a good deal at the Cedar Court Hotel using a website called "Amoma"-  a very good room only deal with a superior room with (most importantly) a bath.

We called in to Sainsburys on route and bought  some Sandwiches for tea, then spent the evening watching telly - interspersed with soaks in the bath. 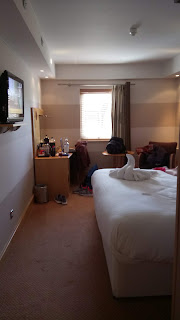 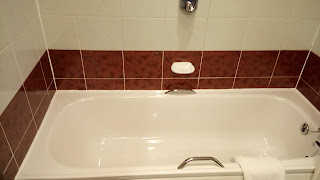 Glad to see you offered them "Australian Gravy" with their chips ! (Tomato Ketchup)