The thing about boating is, that whilst lots of little things 'need' doing... when you're boating you tend to put them off  - especially if it's a nice day with the lure of a chug.

Alas, as we're tied to base until the mooring (paid up) expires at the end of the month, we've had to fight the urge to 'play' and instead, knuckle down to some of the things we've been avoiding.

Nothing TOO onerous I'll grant you and half the time ONCE you've started to do them, you find yourself asking WHY you put off doing them so long.  NO MATTER.... First on my list was to get the chimney swept again - it'd been a fair few months since I last did it but I began to notice when topping the fire up, the resultant smoke - rather than be sucked  up the flue, would billow out of the opened door. 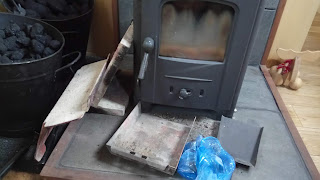 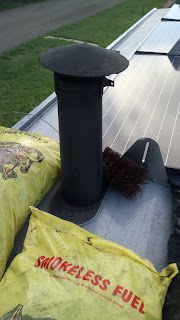 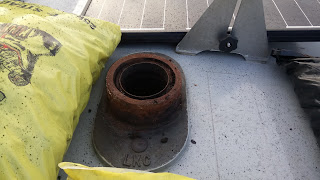 UNLIKE on previous occasions when I remembered to cover the roof with some sheeting, this time I figured it might not be too bad so risked it and made a little bit of a mess instead.  It wasn't too bad and looking out this morning, the rain last night should have washed it away.

Once that was done, I made a note to get some chain to fasten around the witches hat and solar panel bracket - THIS being a result of noticing a fellow boaters chimney blowing off in the wind and into the cut the other week in Windy Granary Wharf... he spent ages fishing around with a magnet trying to get it back - I decided a bit of chain to STOP it blowing into the canal, might be a better method... of course I'm YET to do it but it's in the back of my brain now so hopefully next time I wander in to a hardware store it'll trigger a reminder I'll forget all about it ;-)

Another job I kept meaning to do was replace the little foam rubber things (again) that the porthole glasses sit on - they seem to wear out quite quickly for some reason.  I have to admit to being appauled at how grubby the inside of the frames were so a job for another day is to run a cotton bud around them to clean them properly... none of the drain holes had anything in them so at least there is no danger of water building up and flooding in. 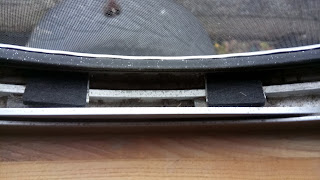 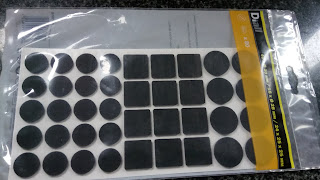 Writing of water flooding in - you may remember a few weeks ago (eek it's probably months now) I fastened a couple of bits of beading to the outside of the glazed side shutters, in a bid to reduce the amount of water that leakes through the bottom if it's raining outside... the idea being to be able to leave the external shutters open on miserable days for a bit more light.

It worked to a point but not when the wind was blowing lots of rain directly at them.  An extra modification was required... 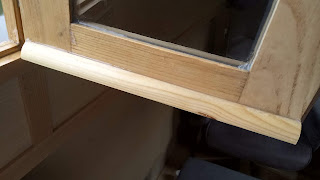 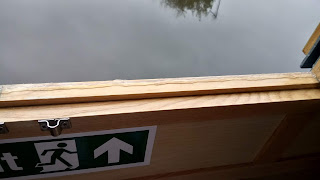 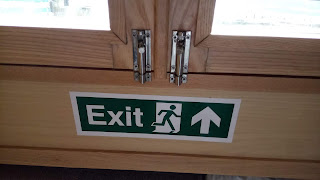 This modification came in the form of bead of clear silicone (only because I already had a tube open from doing the side of the worktop near the sink) and  once it'd had dried, it allowed for a tight seal against the wooden beading when the shutters were closed on to it - the theory (and it's still a theory because it's not rained properly since I did it) being that it will deflect the water to run off into the canal.  I'm considering this a prototype as because I did this from inside the boat (rather than outside), the line is a bit wobbly.  IF it work,s  I'll carefully remove the silicone and repeat it from outside using Sikaflex instead - Sikaflex being FAR better for just about any boating application than silicone is.

I''ll report back in due course.

My next job was outside - Having replaced the centre lines the other week (courtesy of Peninne Cruisers in Skipton) I HAD planned to use the old ones to make side fenders... it occured to me that apart from the bits frayed by the fair-leads, they were in better condition than the current mooring lines.  SO, plan b was to cut off the duff bits, splice a new eye on them and turn them into mooring lines - mooring lines that would be a) longer (the centre lines were 15ms to start with) and b) better condition.

Once I'd run them through the washing machine I set to and (armed with yet another you-tube video) began to make the eyes. 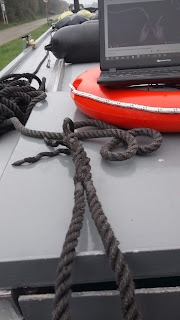 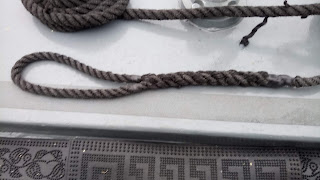 Rather than just 3-4 tucks, I went the whole hog and did 6 "just to make sure" - and, I have to admit to being rather pleased with the result.  I cheated I suppose by using self amalgamating rubber tape to tidy the ends up, rather than melting the ends to stop them fraying.

Once I'd done both ropes, I then bunged the old mooring lines through the washer and set to to attempt to make side fenders from them. 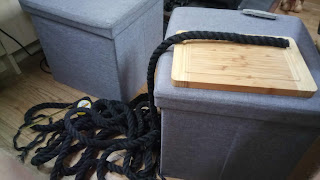 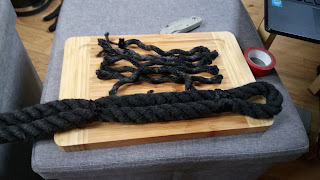 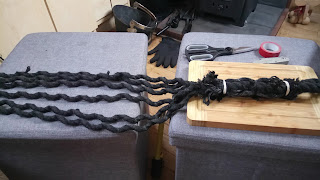 I was following one of the VERY few tutorials available on you-tube - this one in fact.

OBVIOUSLY I chose to ignore the fancy bits where he stitched around the eye... LIFE IS TOO SHORT! - anyway, what seemed like 100's of attempts  I had to give in.  You see, it all goes wrong 7 mins and 6 seconds into the video where he begins the "wall knot" thingy for the bottom...  it appears you need 5 hand to do this... 4 to form the knot and 1 to keep pausing the video... trust me.

Thinking outside the box for a moment, I figured that if I could get beyond the "wall knot" stumbling block, I might be able to make the rest of it up...  with that in mind, I searched for "wall knots" on google and found a 3 and 4 strand knot...  but NO 6 strand one.  Once again, thinking laterally, I decided to turn my 6 strands into 3 by doubling them up and to be fair WAS able to replicated the aforementioned, Tortuous knot, quite well.

Hopefully at some point in the future, we'll come across a chap (or chappess) somewhere MAKING them and I'll ask for a lesson.

You do know you can slow down (or speed up) YouTube videos don’t you? If you tap the three dots in the top tight hand corner then at the bottom of the drop down menu that appears is the option for ‘playback speed’. Hope that helps, I’ve had to use it lots not being so young and bright any more.
Kath (nb Herbie)

Thanks Julia, I'm usually quite good at things like that but it totally has me defeated. To the point, where I've chucked the old rope on the fire in a sulk.

When I stop sulking, I'll investigate learning how to do it - Properly! :0)