If you've looked at our original 2018 cruise schedule on the website, you MIGHT have spotted we're NOT where we had intended to be right now - ergo, instead of the trip to Wolverhampton, we did an 8 night Leeds/Skipton/Leeds jaunt followed by a 2 night Leeds to Wakefield.

The latter began on Saturday morning when we were joined by a lovely couple (from Wakefield as it happens) who are in discussions about buying a boat in a couple of years when they can retire.

I'm a bit annoyed that I didn't think to take any photos really - we just got along nattering so well, I didn't pick up my phone for the duration of their stay.    We left Leeds about half 10/11 o'clock on a bright but bitterly freezing day.  The first day this year I've actually worn long trousers - that's how cold it was.   The canal below knostrop lock was quite busy with rowers so we had a slightly slower than usual cruise but thoroughly enjoyed both that and the company.

We overnight-ed in Castleford on the visitor moorings and on another bright but even colder Sunday morning, began the final leg to Wakefield.   The plan was to go past Stanley Ferry, into town and then turn on the river after Thornes Cut before heading back to our mooring for the night - we HAD however, forgotten about the clocks going back, so rather than end up on the river in the dark, we turned a bit earlier at the bottom of Thornes Lock (near the gym) and shortened the day by about an hour.

After breakfast on Monday morning, Andy gave our guests a lift home and I began to work through a list of jobs - ranging from laundry to applying silicone to the recent attempts at deflecting the rain from the bottom of the side hatch windows.

We've discovered CRT have already let our mooring from 2nd December when we officially leave so we've been sorting out the storage boxes etc.  We've also filled the roof up with coal from the local chap, topped up diesel tanks and generally prepared for NOT having a car - the plan being to flog it in a couple of  weeks - once we've made a birthday visit to my folks for my mums birthday... from then on it will boat yards for diesel and coal as we chug around and the occasional hire car when needed.

The plan is to make a slow journey towards Skipton where we'll spend Christmas and maybe new year - probably going as far as  Foulridge before we turn and then try to get on to the Huddersfield Narrow in January to "try" Standedge Tunnel.  After that, we WERE going to head to Sheffield but looking at the CONSIDERABLE winter stoppage lists, that might not be possible until late February ...we'll have to see how that all pans out.

2019 is already looking good bookings wise though - we've got 7 new ones (one of which is a repeat guest from this year) PLUS 3 bookings we had to carry forward due to the problems with Marple locks and Water shortages... luckily, every one affected was really good about it and we really appreciate that.

I've called in at the paint suppliers this morning to get 2.5 litres each of both greys - mainly for touch up purposes next year ... it seemed prudent to get it now rather than wait until the current tins run out.   When the temperature warms up (at the weekend  like it's supposed to)  I'm need to touch up a few more battle scars before winter gets here properly.    My phone reminded me on the 27th, that it was the 2nd anniversary of getting the boat - we'd forgotten all about it...  it feels like forever ago and I cant imagine not living on it now. 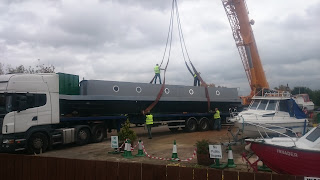