Now back when we were ordering the boat, the builder pointed out that navigation lights were a waste of time in his opinion because, due to the height of the boat, there is no way of FITTING them to apply with "proper" regulations pertaining to vessels of the length of the boat.

Believe it or not, at that time, I was so stressed about the whole boat building/buying business AND work etc. that I caved in and said "ok don't bother with the wires then" - looking back, his suggestion might have been more of a result of the wiring loom having already gone in rather than the legality of said lighting.

Anyway - fast forward 2 years of NOT going out (well at least not on rivers) in the dark, the other day it dawned on me that for the sake of a bit of buggering about, some battery powered thingys would actually DO the job - in as far as having SOME form of coloured lighting on the appropriate side of the boat.... and thus make short journies at night time on the river (say from Leeds Lock down to Clarence Dock) acceptable - and more importantly a bit safer should we encounter traffic coming the other way.  It also occurred that it might make it a little safer should fog descend during a journey although given the relatively low output from the lights, that might just be wishful thinking.

Initially, I thought about getting some magnetic LEDS in the appropriate colours - on searching I found their price to be a bloody rip off prohibitive (remember we're now TIME rich and CASH POOR) - (Donations welcome)  SO  I ended up buying a "set" from a chandlers on Ebay and they cost about 16 quid inc.  delivery... well I say delivery, "click and collect" from Argos but at least it meant not bothering the tenant again.

Attaching said lighting to the side of the boat when required, meant I needed to make some little hookey on bracket thingys... and having a bit of 25mm squared wood lying around came in handy. 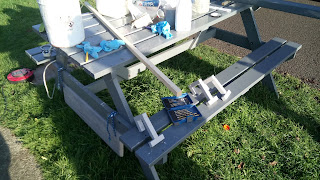 3 homemade brackets which I then painted to match the boat.  OK they're NOT the neatest of things, but on this occasion I've gone for 'function over form'   - and they work just fine.

The lights clip into them and will live inside the boat when not required... 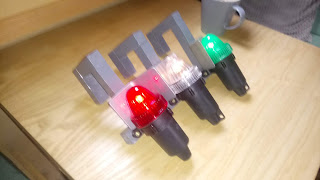 Whilst outside buggering about - AND as the sun was shining for a change of late, I decided to sand down and repair a chip in one of the dinette tables... it'd been bugging me (a little bit) for months.

Unfortunately, the only birch veneer I had left was the edging strip for the doors and although it is a little bit thing, it's tidied it up OK. 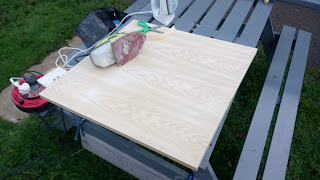 I've given it 4 coats of varnish and now need another dry day to do the other side before we leave  - hopefully.

WHILST out and about, a neighboring boater came asking for help in the form of a jump start for an old car that'd not ran for a while...a car that wasn't actually needed at the time we were doing jobs but later in the week.

As such, I  was a bit short with her and initially left Andy to it - it turned out that both my sets of jump leads, were not up to the job.  SO that only left one thing... and that was to "try out" my emergency planning jump starting thing I bought a while back - it' purports to be able to jump start a 6.5 litre petrol or 3.0 litre diesel engine.  The CCA are rated at 800 which for a thing of it's size seemed unlikely... it also has a built in torch (with disco modes???) AND a couple of USB charging points AND a laptop output.

Amazingly, it actually worked perfectly... and on the screen still showed 98% state of charge.

I know most folk keep a pair of jump leads on their boats in case they need to jump start themselves off their leisure batteries (truth be known I've ANOTHER decent set "somewhere" on the boat) but this really is handy to have and HAD I had it when we came across a flat (batteried) hire boat the other month in Saltaire, we could have helped them along on their holiday... looking back now, I'd obviously picked up one of the NAFF sets of jump leads when I tried to help them.

For a change, my ocd plan for the worst approach foresight has paid off.

Jump leads are now in the bin... I WANTED to keep the wire for emergency use but Andy put his foot down with a firm hand and insisted they were disposed of...  so I put them in my secret store of things that might come in useful  the bin as instructed.