Last night on the Home-Mooring...Spring Cleaning (early) and shank's pony.

It's been a pretty cruddy last week on our mooring weather wise - the occasional dry spell but not a lot of light for the solar panels, way more wind (outside) than we'd like and lots of rain too.

This has meant that a lot of the jobs we'd left until last minute are not going to get done before we chug off into the light blue yonder.  It's not the end of the world but it would have been nice to get them done - procrastination being to blame once more.

No matter - we will no doubt get some bright dry and not TOO cold days in the not too distant future - we hope.

ONE thing that I did get around to  during a brief dry spell - Not that it needed to be dry to be done , was to take the front and rear fenders off the boat, take them to a local garage jet wash and give them a good clean. 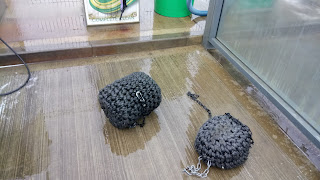 I had planned to do them when we had the boat blacked earlier in the year - alas, I never quite worked out where the power supply for their jet-washer was.  Anyway, it's done now and they're back on the boat - sans green slime... well most of it's gone compared to before.

With this being the last week in Wakey, my old banger went up for sale on Ebay - listed HONESTLY (unlike a lot of the rubbish that gets posted) with faults and all.

The chap was supposed to come and collect it yesterday but asked if he could pay the balance via paypal - and me smelling a rat, suggested he could come the today instead if that was easier... we'll see how that pans out later.  Worse case, we park it up and deal with it in the new year when we pass back through... Assuming it DOES go, it'll be shank's pony for us for the foreseeable - we're actually looking forward to having to THINK about what we buy when shopping as 9 times out of 10, we buy way more than we need.  THAT said, we HAVE stocked up on soft drinks, washing liquid and coal.

Writing of washing liquid,  we've now successfully switched the 'black water' tank from green/blue to bio-washing liquid.  It took a few empties and rinses to get rid of the traces of the blue - which presumably killed off the biological action of the laundry liquid but it has certainly reduced the pong  emanating from the exterior vent.... and (using Aldi's Alamat at  under 2 quid a litre, it's a LOT cheaper than before - not to mention better.  Add to that a spray bottle of diluted stuff in the bathroom (sorry- HEAD) to give a couple of squirts to stubborn bits, it's all good.

In preparation for our departure I'm going to do the next service and change oil/filters.  Including the pre-filter since I've got a whole load of them now.

We switched to not using anything in the holding tank years ago and get no smells at all. The bowl is wiped around with a tiny dot of disinfectant, nothing else.