And we're off...with a Wine Wednesday on a Saturday!

Well, the chap DID come and collect the car as planned so we're now car-less.  Funds of which have been distributed between our nephews/nieces thanks to Christmas, so we're now back to square one financially - but WITHOUT wheels lol.

Friday night saw us taking the boat down to the visitor moorings (outside the pub) where we met up with a few boaty friends to say our goodbyes over a bottle (or 3) of bubbly stuff and a last supper.  Oddly (for us given our dry November) we didn't' drink TOO much and although we were the last ones in the pub (again)...Still managed to get up and set off - in the rain on Saturday morning... BEFORE it was even light!

It's a good job we did leave early though, as what with all the rain that was coming down, by the time we'd gotten to  Woodnook lock the river was already getting a bit fruity... by the time we'd turned off the Calder and on to the Aire (to head upstream) the flow was considerably greater - NO major worry as Ellis's engine is powerful enough to make good progress, it just meant we'd gobble up a bit more fuel.

Once at Lemonroyd, the level had increased a bit further 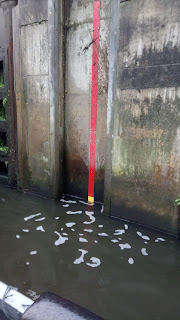 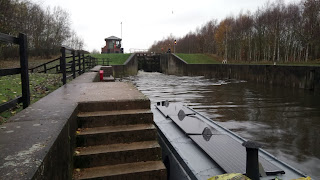 One thing we did notice thought is how differently the boat handles with the roof full of coal though - you'd think because it's sitting lower in the water (presumably) it would be more stable but that's not the case... then again, I suppose with weight on the roof, the centre of gravity is altered. 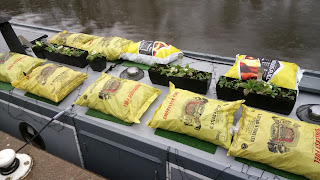 By the time we'd gone past knostrop lock, the river had risen even more and a decision had to be taken whether to abandon a planned pump out at Leeds Sanitary station (and save half an hour of time on the river) OR do it as planned - given the pumpout at Stanley has been broken for ages, we really DID need to get it done.  Once completed, we powered on up the river and through Leeds lock - hoping to get in to Clarence dock... that wasn't to be as the visitor moorings were full.  SO - back on to the river and a mad dash up the Granary Wharf - the flow by now quite considerable.  We were quite relieved to get safely tied up along side and away from the by now fast rising river.

Of course - it then meant we were trapped in Leeds for a few days but with full water (and empty toilet) it's not a problem.

Settling down for the night, I got a message to see if we'd arrived in Leeds yet from our old "Wine - Wednesday " friends who were passing through on route back from seeing 'Dracula' in Bradford.  An impromptu bangers and mash for tea followed by a few drinks followed before they had to dash to catch buses home - Trains HAD been planned but YET again, Strike action messed things up. 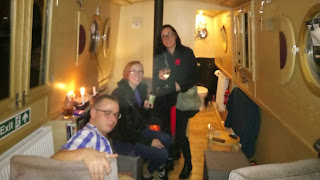 Sorry ladies, my phone doesn't seem to like taking "flash required' photos these days... either that, or my greasy fat fingers had smudged the lense.

Poor photography a side, it WAS lovely of them to call in  - we've really missed them since one of them moved away to Harrogate and the other changed jobs.

Hopefully, we'll catch up again in Skipton over the Christmas period when I believe a hotel stay is planned.

The river is still up so we're holed up in Granary Wharf and unable to nip back to Clarence dock (where we'd hoped to connect to shoreline to give the batteries a bit of winter TLC) but as luck would have it, I spotted an Xmas tree lights plugged into one of the power bollards here so figured if ONE was turned on, the others might be too....  fast forward to a 16amp cable plugged in to test and Bingo - shore line.

Given it's not technically turned on for OUR benefit, we're not taking too much of a liberty and restricting our use to daylight hours (to get the batteries full) and unplugging over night in case someone trips over the cable and ends up in the water.

If challenged, we will of course unplug it but to be honest, I'd think the locals would much prefer us to 'purloin' a few amps of their power rather than run a carbon producing diesel engine for hours on end to achieve the same charging result - that said, due to the hospital silence, we're so quiet when running anyway AND our engine doesn't smoke, they'd probably not notice in the first place.

Today we've been for a free trial pass at the Anytime Fitness centre in Bridgewater Place - just to see if it's worth joining for when we're in the area...  between you and I, it's a bit over priced for the facilities offered... still, an hour plodding away on the cross trainer followed by a shower using their facilities does mean our  water tank stays fuller a bit longer. 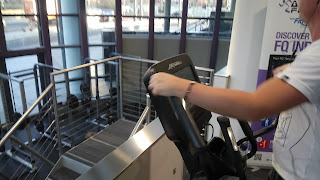 Perhaps we'll try another gym before we depart for Skipton next week.

I meant to ask in your last blog how much washing liquid do you need to put in the black water tank? We are very intrigued it sounds so much better than the other nasty stuff and would like to give it a try.

It's been a bit of a trial and error thing... I think we're there now with about half a litre of the cheapest bio I can find (currently Whizz from pound-stretcher) for the initial priming... mixed in the loo bowl with about 2 litres of hot water and left to fester for half an hour before flushing away - followed by a cap full every other day AND a diluted mix in a spray bottle near the loo for follow up sprays around the bowl - it seems to be working ok now although it did take a few fill,empty and rinses to get rid of the previous attempts with blue/green.

Good luck with it - I think it's worth persevering with, as at worst, it's only costing a couple of quid a month rather than the cost of elsan.

Brilliant! We’re going to give it a go.