Christmas Day - with no TV signal, no "big dinner" and fog... PERFECT!

Well it's the big day - apparently...

It annoys me more and more each year...  I wish it didn't but it creeps under your skin - CAUSED by... the Media and shops.  I've never been good at being TOLD what to do... preferring to plow my own furrow so to speak and have always maintained the mantra  of 'just because I'm the minority, doesn't mean I'm wrong - and also, I'd rather be walking the right direction on my own than heading over a cliff with the crowd'... That's probably a paraphrase from somewhere but you get my drift.

Anyway - if it matters to you and you're reading this we wish you well - but no MORE well than we would if we bumped into you in need on  say the 11th March!

Right - Xmas moan out of the way, an update on the batteries.

Sods law has dictated that having gone to the boat yard before they closed for the holiday and bought 4 new batteries 'just in case', SINCE then, the present ones have behaved perfectly well - I half expected that to be the case but given we've guests arriving tomorrow for a Boxing day, Christmas dinner, it was a gamble we couldn't really take.  SO - for as long as required, they'll have to live at the bottom of the bed - occasionally being moved from one side to the other to adjust the ballast as the black-water tank level varies. 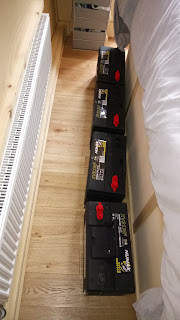 I'll do a quick calculation of self discharge rates and periodically give them a blast on the battery charger so that when they ARE needed, they'll not be half flat already.

Ignoring my ignoration of the festive season, Andy and I decided to have NB Ellis's Xmas "do" around Skipton Town on Friday night...  the atmosphere was really good actually.  Everywhere we went into was heaving and had a good vibe...  folk all over the place were hugging and kissing each other - mainly the men as it happens... I've never had SO many man hugs from  random strangers - presumably, after 13 pints, most of them think  they must know you and go straight in for the hug...  no offence was taken and I had to admit, I was pleased to know that some of the lovely checked shirts I've been hanging on to for 20 years (that I can no longer fit into) ARE still in fashion somewhere ;-) .  We had to admit though, that WE felt a bit lonely - with everyone else apparently KNOWING everyone else...  I suppose that's the nomadic life for you sometimes.  Back in the day of "proper employment" I'd be able to go out in the town I lived in and know 100's of people (mainly as a result of working for the towns' largest employer) and being strangers even in a friendly town, it did feel a bit lonely - the beer DID help though!!!

We did of course drink far too much ourselves and the morning after/whole day, was awful.  We did manage to stagger out for some day light - something which has been lacking for a while.  ALL these years I've been visiting Skipton and I'd never had a proper wander around the woods - it turns out they're quite nice. 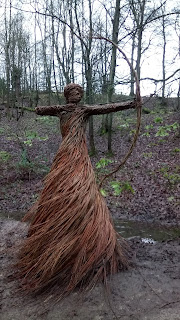 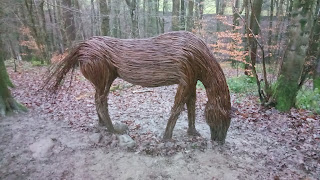 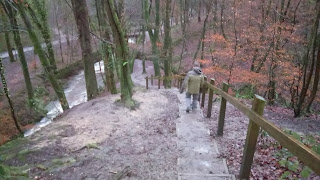 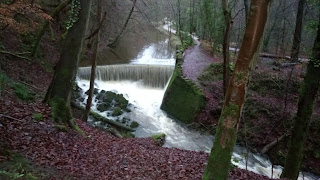 Certainly no shortage of water in the woods .

It was a bit muddy in parts underfoot but the trees did provide a little shelter from the rain that kept trying to wash our hangover's away so muddy boots were a small price to pay.

Back to the aforementioned "loneliness" for a moment, we have bumped in to a boating couple we met earlier in the year and keep  bumping into them as they dog walk - we're planning to partake of a libation with them at some point before we depart the town in the New Year.

Writing of departing - Prior to our arrival, the canal UPstream had been "closed" until further notice... well, that further notice has come and it's now re-opened again...SO, we can go back to (plan d I think it was) to head up as far as Foulridge tunnel (the other side) before we retrace our steps back to Leeds - we have to be through Kirkstall locks by early Feb as a month long stoppage is planned whilst CRT replace some gates ...

We are enjoying being here but I'm getting itchy feet again and am looking forward to chugging off in the new year.

ONE thing we do find difficult about being in Skipton is the TV / Radio signals...  our Ariel, whilst usually ok, just refuses to pick up Radio 2 or any BBC channels on the telly box.  Christmas days usually consist of eating,drinking and watching whatever tripe is broadcast... TODAY however, it looks like it's going to be NETFLIX  to the rescue - in fairness, these days thanks to "THREE'S"  free data allowance for Netflix (called 'go binge') we tend to work our way through box sets rather than watch broadcast telly anyway.

It's foggy this morning which is a bit pants... I'm really missing sunlight this year... I'll drag Andy out for a walk at some point - probably after we've eaten our "non-Xmas" lunch, which this year consists of Spare ribs, Peking duck pancakes, pizza and chips.

Righty ho - it's half nine now so I'll start up the engine and give the batteries a bit of a boost - they were on 90 % last night when we turned the lap
top off - This morning,  they were at 70% which is about normal for a night running the fridge/freezer with the fire on.

Merry Christmas if it matters to you -we'll see you on the other side.

PS   THESE are actually quite nice... 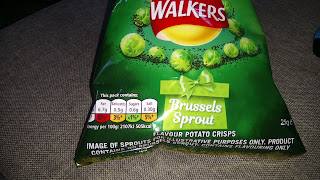 Nice 1 Mark and Andy have a great 2019, enjoyed following another year on here.
Cheers
Ade

Wishing you both a wonderful new year! I am looking forward to reading posts of your continuing adventures.

Hi Ade and Jaq - dunnon what I've done but I seem to have lost the ability to reply individually to comments now... grrr.

Anyway - all the best to you both... sorry you're leaving the cut Jaq.... you'll be missed x