Don't fret - this isn't a "to whom it may concern" moment... we're still trapped in Leeds by the river in flood  - well I say trapped, we're trapped from going on and off the river to the service point NOT the other way (which is the way we are intending to go anyway) but it adds to the drama!

So - it's been raining on and off since we arrived here and as such apart from a brief few hours, the flood gates into Clarence(Leeds) Dock have been closed.  Trying to fill time NOT boating and NOT spending money is quite challenging - especially when it's raining.  We don't mind walking in the rain particularly, but NOT when it's windy as well... water proofs only go SO far when the rain is horizontal.

I forget which day it was, but the decision was made - Jointly I think, that we'd go and have a look around the Royal Armories Museum.

We did hang around briefly for the river taxi but decided that it might not be running as the boards were already well into the yellow and fast approaching red.  Having arrived at the museum, I have to say it' feels a lot bigger on the inside than it appears externally.

Rather than take the lift to the top, we continued with our health kick change of lifestyle, and walked up the stairs. 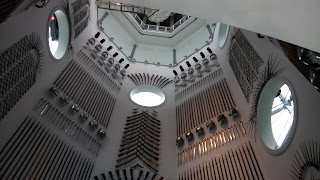 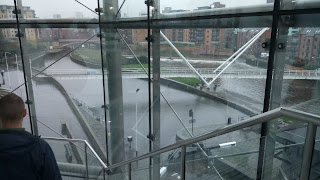 We've often seen this from the outside but hadn't realized the centre of the column was also filled with 1000 different ways to kill someone.

The displays in the museum are very well laid out and IF you were actually interested in that kind of thing, you could easily spend days exploring  and learning a lot about weapon history since God was a lad.    I can imagine the museum is a wonderful resource for schools doing projects on whatever period in history.  Alas, for us it was wasted and whilst we could appreciate the collections, had that awful feeling in the pit of our stomachs in regards the horror of it all.

For me, the best view in the place is that out of the windows over looking the docks. 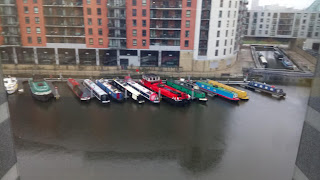 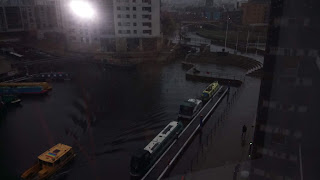 I caught (albeit it  bad one) photo of what I think was the last river taxi to run since the river got angry ... the flood lock was closed by the time we left anyway and we've not seen one running since.

As well as a visit to the Armories, we've also tried out another Gym in the city centre - This time, the Nuffield.  It's in "The Light" and was offering a free trial day.  Given it's possible we might take a winter mooring in Leeds for a couple of months on our return from Skipton, it seemed logical to try out the local fitness centres.  It's not bad actually - the changing rooms are a bit tired but they do have a reasonably sized swimming pool that wasn't dirty  and supply towels.  If we do stay here for a while, it's certainly worth the money.  It all depends on trips booked etc. and we still want to get up to Slaithwaite before too long.

We've got passage booked through Forge/Newlay Locks 9 am Tuesday morning which will mean a night moored up near Kirkstall - we normally try to avoid mooring in that area as urban myth suggests it's not the safest of places of an evening... it's not like we're going to leave the boat there though so for one night, we'll take our chances - it's that or setting off in the pitch black on Tuesday morning to arrive at the locks by the allotted time.

We've been spoiled here though - what with the power bollard being "on" we've been able to keep the batteries fully charged without running the engine much - hot water has come from the webasto.  Writing of hot water, the other day, I had another of my (infrequent) Eureka moments... WHEN I was filling the washing machine - pouring 2 x  5 litres of hot water into the drawer, it dawned on me to buy a "shampoo spray" head... the sort that plugs on to the tap and give the washer a head start that way... DUH! 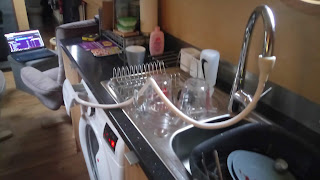 WHAT an improvement... NO spills on the floor when the drawer 'burps' and far easier than having to store two large empty water containers...WHY it didn't occur to me 2 years ago, is anyone's guess!

I love your ideas! I’m getting a shampoo hose thingy when we next come across a pound shop brilliant.

Cheers for the vote of confidence Barbara - measure your tap though... I didn't and ended up having to take a Stanley knife to the inside of the pushy on bit if you follow... as a result, it needs monitoring whilst on so as not to spray up the wall !!!

We had a look around Leeds Armories when we were there a few years back. Lots of our friends had said how great it was, we just saw death and destruction as you did. The view from the windows was far far more interesting and kept drawing us away from the displays.
How ever being moored alongside for the night we were amused by the suits of armour whose stance looked like they were all having a pee.
Enjoy Skipton