And we're off again but not for long ...Stoppage stopping Christmas?...

The trip thus far as been quite nice - mainly bright days, chatty folks along the way and us taking turns being skipper.

We left Leeds Monday afternoon as we were booked in for Forge & Newley locks  9am Tuesday morning...

Having already decided to Moor outside Kirkstall Brewery Halls of residence we sort of expected a bit of noise - we hadn't quite bargained for a combination of Christmas parties & football on top of the already exuberant youth contained within... Ergo, it was about 3am before things quietened down.  Not the end of the world but it did feel a long night.

We got our own back though at 7am when we started up and headed up to Kirkstall lock! - our revenge was short-lived though as we naively thought that it was only Forge/Newlay that were locked... hence we ended up sitting in Kirkstall lock until 9 am when CRT came to unlock it. 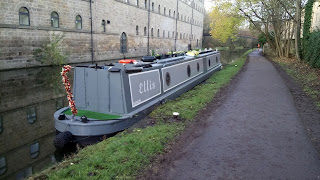 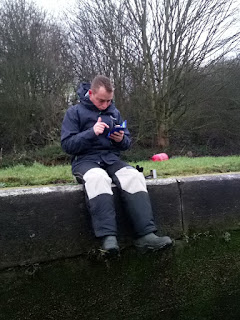 No matter - once on our way, we were soon through the staircases. No shortage of water on here despite the closure up stream (Gargrave to Wigan shut again until the end of the year). 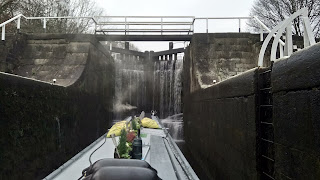 On route to Rodley ( where we'd planned on spending a night)we had a feeling we were being watched... 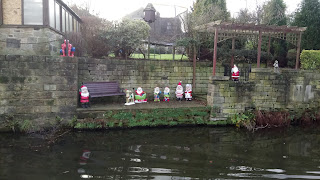 - alas, the visitor moorings near the pub were full so we chugged on to Apperley bridge.  As usual, plenty of space there opposite the marina and we had a wander up the hill to get some groceries from Sainsburys... The Homebase next door to it having  changed over since our last visit to a B & M (or Home Bargains... I get the 2 muddled up). 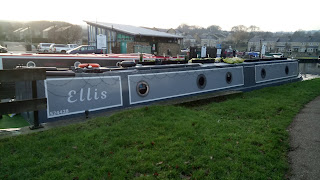 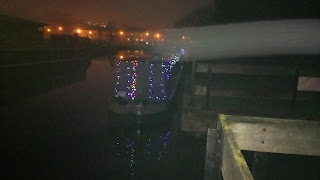 You'll note the lights have now been extended onto the Swan's neck - I think that's about the limit now as someone is getting sick of having to remove and recharge the batteries every other day...  and it's STILL ages off Christmas!

Before we could leave Apperley, I had to head down the weedhatch as I had picked something up the previous day and not mentioned it... it turns out, that if you ignore it on your skippering day, it does not become the next skipper's problem -  Hmmf!

Having added a kettle of boiling water before I began, it took the edge off the coldness I suppose.. NOT a lot though - and in hindsight, buggering around taking a photo won't have helped either lol. 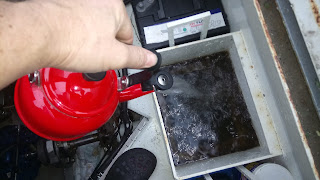 I removed a plastic bag and about a metre of electrical wire that was well tangled up.  It felt better after that and we resumed our journey.

Approaching Dobsons locks, we came across a gaggle (no idea what the collective noun is) of CRT volunteers who were having a tidy up.  Dobson's lock and area is quite neat and tidy and they do a good job.  As I was working the lock I looked back and spotted Andy chatting to a bloke who it turns out follows my babbling on Twitter - not for what I post but because he's local and knows the canals I think... nice bloke and Andy enjoyed the natter. 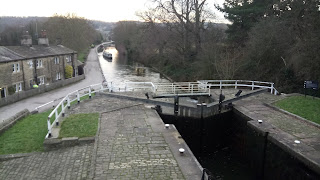 A cold but pleasant hour or so's chugging and we arrived in Shipley - unusually (for us) no one else was on the visitor moorings at Gallows bridge so we tied up and took the opportunity to nip into Aldi for some heavy stuff - being able to wheel the trolley right back to the boat made a lovely change. 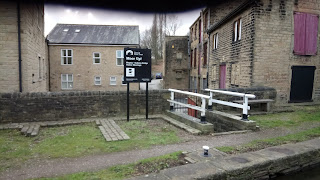 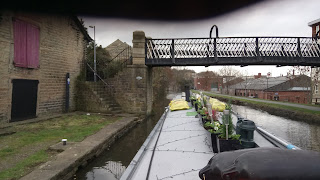 Once I'd returned the trolley, we pressed on through Shipley and Saltiare - and met our first boats in days travelling the other way.  I went to help them through the lock to find one of the boaters was a seasonal crt chappy  that we'd encountered earlier in the year... 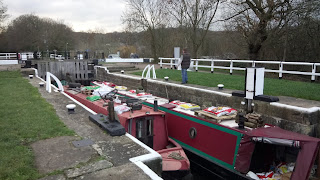 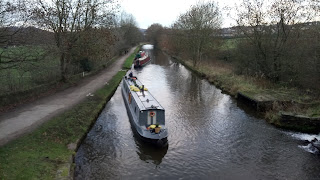 We chatted a bit, and he told me he'd just given up his mooring a little further up due to a large price increase and uncertainty as to whether or not he'll be taken back on next year by Crt - "cuts" being rumored...

We ended the day (having gone up Dowley Gap staircase) just outside the Fisherman's pub. 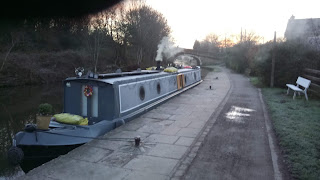 Next morning, I'd sort of let the fire die down and as such when we awoke to minus 2, it was chillier than usual inside too... 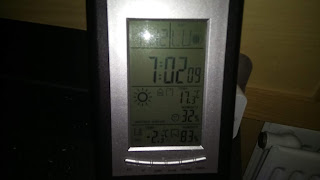 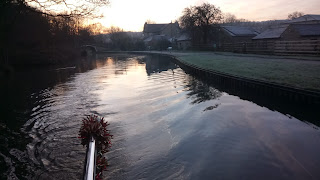 I soon had the fire back in to life and we were off - having booked Bingley for 9 am... of course we were there early again but we were up and through in no time - being the only boat booked for the day, I made sure to leave the lockie some beer... having run out of wine SO fast!!! 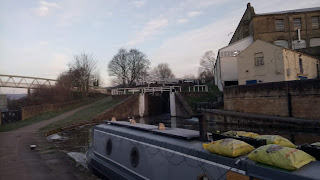 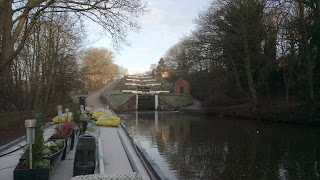 Spending the morning mostly in the shade of lock gates, the frost on the boat still hadn't melted by lunchtime so I decided it was time for some mulled wine  - medicinal purposes of course.  Andy isn't keen on it so even better. 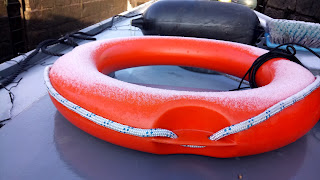 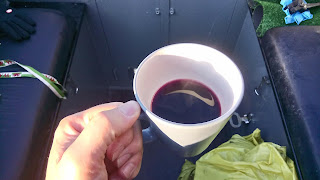 Passing Silsden, we observed most (if not all) of their hire fleet were tied up for the winter... we counted 25 boats in total but there might be some out on hire I suppose... 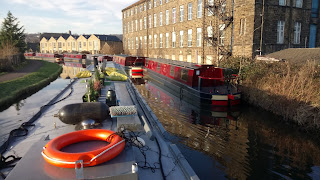 We'd half planned to spend a night there but looking at the weather forecast, decided to push on a bit further so as to be able to get tied up on rings/bollards rather than pins in preparation for the on coming storm.

Luckily, once through Kildwick Swingbridge, no-one was on the bollards beyond so that's where we've ended up. 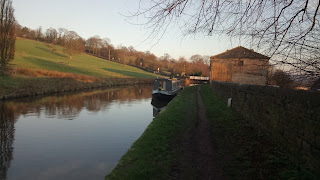 Having now taken a walk into Skipton, we've discovered a problem..  a car has hit a Farnhill Bridge and although Crt have removed the debris from the canal, "someone" somewhere has decided it's unsafe to pass under "in case" a bit more falls out....  Having taken a good look AND I suppose done our own risk assessment, we both feel it VERY unlikely any masonry could actually fall UNLESS it was hit by a car again - ergo, it's NO more unsafe NOW than it was BEFORE the original car hit the bridge if you follow..

Alas, CRT have put a big HEAVY hopper under it and blocked off the canal.  They've basically CREATED a stoppage themselves and we're miffed to say the least.  SOME folk would be tempted to move the boat and pass under... we're not rule breakers (generally) so tomorrow I am going to get on the phone and plead to CRT to let me speak with someone on the ground, in the hope they will move the hopper and allow us to bow-haul if necessary Ellis through ....  we've got friends and family and customers all hopping to meet up with us in Skipton over the Christmas period - some travelling a long way and it'll be a poor end to the year if we're stuck here... worse still, is that we've already gone passed the last winding hole and will have to reverse a while before being able to get back to Bingley for water/refuse disposal.  We're OK for coal (for now) but HAD planned on topping up with Diesel and taking on a bit more from Pennine  Cruisers when we get into Skipton. 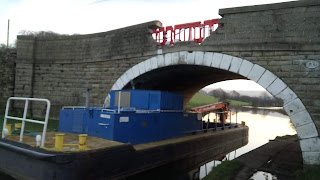 In other news - remember my old banger I sold the day before we left? - well it got a parking ticked in Southampton on 4th December which the tenant kindly took a photo of and sent to me.......  I've gone online - it being impossible to SPEAK with a person on their "payment line" (ParkingEYE) and launched an appeal...  I mean, this isn't going to be a pain to sort out is it? grrrrr