An Elf is for Life - not just for Christmas...

We're still in shock  here - for the first time, living on a boat without access (easily) to a car has been pants...

On hearing of Joyce's death, instinctively I wanted to get in the car and go to my father...I suppose that's why I crashed out of Dry January so spectacularly in the early hours of Tuesday morning...  Gin on this occasion should not have been the drink of choice but Andy's parents had visited at the weekend and we'd bought some in for them.

It's been a rough couple of days - we hired a car yesterday morning... Andy driving as I had WAY too much gin still floating around my system... and set off to meet dad at the hospital - he'd gone back to (with his sister Ali who was taking her husband for a blood test) to see if he could collect the MCCD thingy...  until 4 am yesterday morning I had not even heard of such a thing.  Anyway - he couldn't get it because they hadn't decided on the cause of death yet.

On speaking with Ali, given our eta, we changed our route and met them back at the parental home.

It was awful - Cliff was/remains, a crumpled and crushed frail super hero ... I can't find the words to describe the situation.... I know many folk have already endured this and as such, feel it inappropriate to wallow in my own self pity... suffice to say, whilst neither of us could do/say/act anyway to help each other, it was some kind of comfort... AND something mum would have appreciated us both trying.

Oddly, I'm finding myself referring to Joyce as mum at the moment... I think because saying her name feels harder than "mum",  Strange.

I know this is personal stuff, but this is my blog after all -  Anyway - Cliff got out the address book and I started making calls to people who she'd want to know....  that was awful too - barely making it through the calls before i crumbled and blubbed..  folk are kind and tolerant though and I did have some nice conversations with people I've not spoken to for 30 years - one old dear remembered me by the fact at a "village dance/disco" many , many years ago, I'd noticed she wasn't dancing and invited her to do a St Bernards Waltz with me... I have no memory of this but it sounded like the sort of thing I'd have done as a kid and did make me smile through sobbing.

About lunch time, hospital phoned to say they'd had a meeting and agreed a cause of death as a pulmonary embolism (blood clot in the lungs) and asthma... there was mention of a mass in her lungs but given the outcome, no point in looking for a cancer diagnosis... which is a relief - knowing she was "more ill" won't change a thing and without a shadow of a doubt, I have complete faith that everyone involved will have tried their hardest to keep her alive/bring her back.

That meant we could go back down there (it's about 15 miles away) to get the med cert.  Walking in to the hospital with my dad was the hardest thing ... i wish I'd left him in the car and gone in for him... poor man.  Armed with the cert we then went to the registry office.  I'd phoned ahead and made an appointment for 2.30 - we were an hour early but I used to work for the council and decided to chance my arm at going in early.  Leaving Cliff with Andy in the car, I went in and came out half an hour later with the death certificates and form required to release mums body to the undertakers.

I must say - the registrar couldn't have been more kind, patient and supportive .... I know it's their job but I couldn't do it and all credit to her.  I actually filled in the "customer care survey" card in the back of the folder...  I forgot to post it of course and got a call from the car hire company this morning asking if I'd like them to post it for me... having left it on the passenger floor well - doh!

When we got back to dads, (that feels weird writing) I logged in and did the "tell us once service online...  if you've not heard of it, basically it's a government thing whereby you can select parts of a persons life that exist in the government/authority ether and close them down.

It's probably a very good idea but it really hurts doing it... each box you tick, blue badge, library card, bus pass etc (not that she had a bus pass) feels like you are deleting her ever existing.

By about 4. we'd done all we could do .... I offered to call the family undertakers for dad but he was adamant he'd sleep on it and do it today.

Rewind a bit- when we dug out mum's birth certificate/wedding cert to take with us, we found letters addressed to the people she loved most...  dad and I didn't dare open them at the time... both choosing to do it later.

We left about 4- half 4, and set off back to the boat in Skipton.  That back road with Andy driving in the dark was interesting!  I think my teeth marks in the dash will bounce out in time.

Last night  ... even after the hellish day, when we did get back, I resisted the urge to have a drink and instead, took a sleeping tablet - I have some in stock as a long term insomniac... to be honest, I was so exhausted I was already falling asleep before i popped a pill but it was good to feel assured of  an unbroken night...  which I luckily had.

WHEN  I reached out the other night - it was self indulgent of me and whilst I regret not being stronger, I am SO humbled by the kindness, support and thoughts of 'strangers' ... they don't feel like strangers though... the boating community feels like family... knowing that people empathize with you - especially those who have experienced far harder things, REALLY is a comfort...  Boaters ... and boaty enthusiasts, REALLY ARE A GOOD BUNCH!

Thank you for caring...

As soon as we arrived yesterday... dad dashed into the other room and came back with the xmas presents Joyce had bought but been unable to give us... they'd planned on meeting us in Skipton for lunch before Christmas but was too poorly to make the journey...  nothing important ... a cheery "little Elf" Xmas hat for Andy which apparently tickled her and today whilst we chugged on towards Bingley (we're scheduled to go down the 5 and 3 on Friday now) he wore it in her honor. 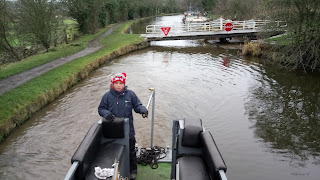 You have certainly brought a few tears to my eyes as I have read your posts you have said it from your heart your Mum would be so proud of what you are doing and what you have said, keep sharing it does help I’ve been there. Kindest thoughts and heart felt sympathies Barbara
xx

Just catching up with your posts as I'm on nights at the moment. So sorry to hear about your mum. I remember from when my mum died that going to the hospital to get the cause of death document was one of the hardest things -- it's difficult seeing it in black and white. Please know that lots of people are thinking about you at this time.
Adam

Mark you have our sympathy for your loss. This is obviously a difficult time for you... and even more for your Dad. Your mum must have been a wonderful person for you to grieve so deeply. We are thinking of you!

Hi you two. So very sorry about your mum. Our thoughts are with you. Hope you will all be ok. Xx

I know how you having been down the same road, first with dad and then mum. I still tell them things in my head. You wont forget or get over it but it will get easier until something grabs you and put you back there

Hi Mark, l was sat at home feeling really sorry for myself following an accident at work, reading your last couple of blog posts put my feelings into perspective and made me realise things could be worse. As many others have said you don’t get over it you learn to live with it and things do get easier. Currently other people’s ramblings are what’s keeping me going along with lots of daytime tv so please feel free to carry on using your readers as a sounding board. My thought are with you Mark, it will get better. Paula x